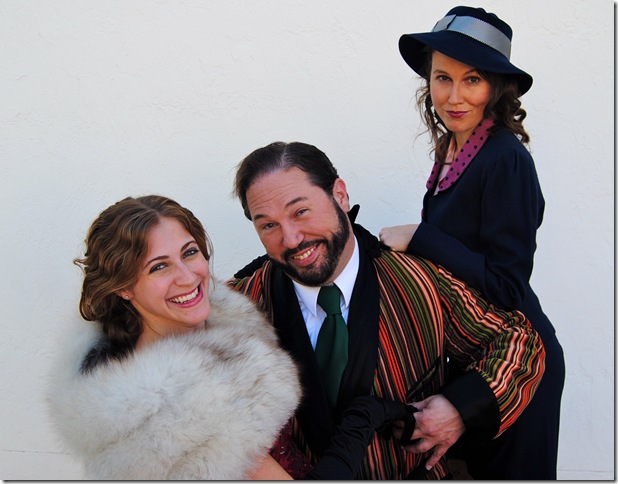 Despite its length — just over three hours, including two intermissions — The Man Who Came to Dinner is a rapid-fire comedy that demands constant attention from the audience.

The three-act play was written by George S. Kaufman and Moss Hart in 1939, and reflects the screwball comedy genre popular at the time.

“The dialogue style of their comic pieces was written for a fast delivery and an unrelenting pace,” director Jean Louis Baldet said.

The play tells the story of famed radio personality Sheridan Whiteside (Scott Wells) who is invited to dine at the home of a prominent Ohio family, Mr. and Mrs. Stanley (Kathryn Lee Johnston, Wayne LeGette) when he slips on a patch of ice outside the front door and injures his leg.

Following doctor’s orders, Whiteside is to remain confined in the Stanley’s home where he delights in meddling with the lives of everyone in the household. When Whiteside discovers that his injury is cured, he decides to stay in his wheelchair at the Stanley home and ramp up his mischievous ways.

Soon afterward, when it appears his secretary, Maggie Cutler (Elizabeth Price), is going to marry local newspaper editor Bert Jefferson (Michael Empson), Whiteside concocts a nasty, hare-brained scheme to halt the nuptials. Maggie learns of Whiteside’s nefarious effort and comes up with a counterplot of her own. But a slip of the tongue gives her plan away, and it appears Whiteside has won the day.

But when he realizes the consequences of what he has done, he repents — and relents, in just the nick of time. This play is packed with quick-rip one-liners and slapstick. And the ending is a perfect piece of “here we go again.”

Scott Wells is absolutely perfect as overblown, puffed-up radio personality Whiteside. His wit crackles in every line, whether he’s giving the bum’s rush to hard-working nurse Miss Preen (Katy Slaven) or firing barbs at the Stanleys (“I’m going to sue you for $150,000,” he screams from his wheelchair.”).

Actually, Kaufman and Hart populated their show with celebrity friends. Whiteside is based on Alexander Woollcott, while Noel Coward is represented by Beverly Carlton (Connor Hammond), a whimsical English actor with a love of stage — and impersonations. Hammond pulls it off with aplomb and excellent stage presence.

If you saw a hint of Harpo Marx in Whiteside’s close friend and villainous compatriot Banjo (Jordan Armstrong), you’re right. The playwrights infused that character with Harpo’s love of Marxian antics. And Armstrong does a darn good job of making it work.

Actress Gertrude Lawrence is reflected in the character of Lorraine Sheldon (Lisa Rosen), a blonde bimbo who can’t refuse a proposition — be it marital, theatrical — or otherwise. Rosen puts her heart into the role and the character comes to life with humor singed with a snip of sniffles for the winsome woman’s naiveté.

Supporting cast members are wonderful, too, including Dr. Bradley (Doug Wetzel), who always seems to be in someone else’s — or his own — way; Sarah (Jenna Wyatt), the unflappable housekeeper and John (Gerald Arroyo-Prada), the fastidious and uncomplaining butler. Also bringing angst to the play, and to Whiteside’s meddlesome attention, are the Stanley kids, June (Taylor Jacobs) and Richard (Eduardo Rivera), and June’s love interest, Sandy (Matthew Morrell).

“Recreating one of the American comic theater’s best productions has proven to be a marvelous vehicle to train and develop our emerging young professionals in a style that was so much a part of the emergence of the American theater, and so expressive of the robust image of the American character,” Baldet said.

The Man Who Came to Dinner, which closed last weekend, was one of the productions in the 27th annual Festival Repertory Theatre season at Florida Atlantic University in Boca Raton. As in past years, Festival Rep featured professional Equity actors working alongside FAU graduate students appearing in their final campus productions before they graduate and enter the world of professional theater.

Other productions in the summer season included Stephen Sondheim’s A Funny Thing Happened on the Way to the Forum and the Sondheim revue, Side by Side by Sondheim.

The stage lights will be extinguished for the summer following three musical shows this coming weekend: The piano gala extravaganza on Friday, and Big Band concerts on Saturday and Sunday. The shows are at 7 p.m. in the University Theater.

For information and tickets to the final concerts of the summer series, visit www.fau.edu/festivalrep.

Film: Playwright August Wilson began his chronicle of the African-American experience throughout the … END_OF_DOCUMENT_TOKEN_TO_BE_REPLACED

Film: Just in time with the opening of movie theaters in Palm Beach County comes the season’s most … END_OF_DOCUMENT_TOKEN_TO_BE_REPLACED

Music: The very last concert Franz Joseph Haydn attended in his life was in March 1808, about a year … END_OF_DOCUMENT_TOKEN_TO_BE_REPLACED