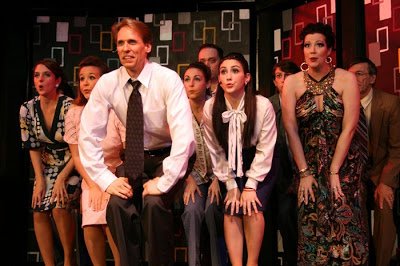 Whose plays would you say are more difficult to produce well, Shakespeare’s or Sondheim’s?

Although Company is an ensemble show, its focus is on a 35-year-old confirmed bachelor who looks to his married friends for positive signs that might persuade him to take the marital plunge. Bruce Linser, the Rep’s go-to guy in recent seasons with impressive performances in Bye Bye Birdie and Evita, tops those efforts with a brooding, full-voiced star turn as commitment-phobic Bobby, wrapping his lungs around two of Sondheim’s pain-filled plaints (Marry Me a Little and Being Alive).

Company has plenty to say about marriage, although the show is virtually plotless. It takes place as Bobby’s friends are readying a surprise party for his birthday, as he recalls various encounters with the five married couples who each try to push him towards marriage, though they are ambivalent at best about the institution. As Sondheim puts it in the sardonic Sorry/Grateful, it is a state of suspension between the emotional poles of “regretful/happy.”

The score carries the show and is light-years above the sketchy script by George Furth. Even when Company was new, scenes of karate as sexual sublimation and the joys of recreational marijuana seemed stale, and the intervening years only underline that impression. The jangly, pulsing songs, on the other hand, retain a vibrant, contemporary feel, after almost 40 years.

Choreographer Kathryn Austin does what she can with a cast of non-dancers, giving them some simple group steps for Side by Side by Side, led by Linser who tosses in a few faux-tap moves. The show’s original standout dance solo, Tick Tock, an expression of emotional frustration by one of Bobby’s girlfriends, is omitted here as it often has been in Company revivals.

Musical director and keyboardist Ana Flavia Zuim does a first-rate job rendering Sondheim’s intricate rhythms, and the performers do reasonably well too. Unfortunately, the sound mix leaves a lot to be desired, with the orchestra drowning out many of the crucial lyrics.

That is certainly not true for Laura Hodos (Carbonell nominee for the Caldwell Theatre’s She Loves Me). This Equity guest artist puts a Mermanesque spin on the 11 o’clock showstopper, The Ladies Who Lunch. Other standout voices include Nate Lauar (David) and Michael Focas (Paul).

On the liability side of the ledger is Richard Gamble, theater department chairman, who comes off wooden and uncomfortable as Hodos’s put-upon husband.

On balance, however, director Blanton and his company succeed at scaling the heights of Sondheim’s challenging work. Company is clearly the show to see in this year’s Festival Rep, most notably for Linser’s performance.

Film: Playwright August Wilson began his chronicle of the African-American experience throughout the … END_OF_DOCUMENT_TOKEN_TO_BE_REPLACED

Film: Just in time with the opening of movie theaters in Palm Beach County comes the season’s most … END_OF_DOCUMENT_TOKEN_TO_BE_REPLACED

Music: The very last concert Franz Joseph Haydn attended in his life was in March 1808, about a year … END_OF_DOCUMENT_TOKEN_TO_BE_REPLACED