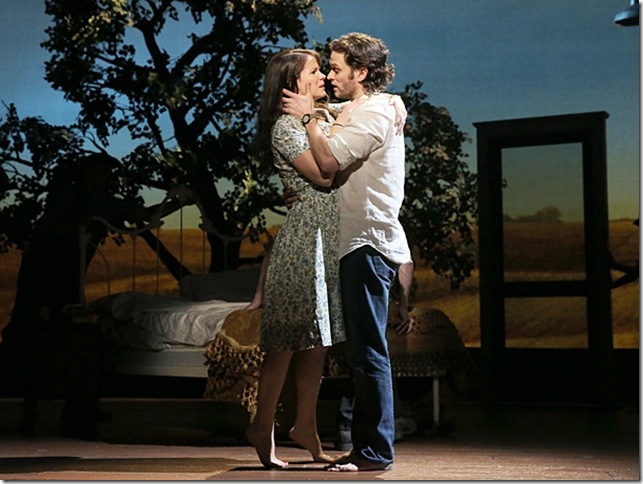 Increasingly, the Broadway stage has turned into a theme park, full of lightweight musicals anchored by spectacle and special effects. That is fine, when appropriate for the material — you wouldn’t want to see Aladdin without its magical bells and whistles, would you? — but the problem is that these shows crowd out the simpler, more artful, adult musicals.

Musicals such as The Bridges of Madison County, Jason Robert Brown and Marsha Norman’s visually minimalist but emotionally maximalist take on Robert James Waller’s incredibly popular novel about a sudden, furtive affair between a love-starved Italian woman transplanted to Iowa and a National Geographic hunk photographer briefly in the area to shoot the title covered bridges. It is pure chick-lit twaddle and the subsequent Clint Eastwood-Meryl Streep movie only slightly less so.

But if you were looking for a textbook example of the transformative power of musical theater, this would be it, for Brown’s soaring, dramatic melodies and nakedly honest lyrics turn this mawkish tale into an aching portrait of human yearning.

Such is the quality of the writing, of Bartlett Sher’s delicate direction and the towering performances of Kelli O’Hara and Steven Pasquale, that the show is closing this Sunday. Deemed too small for Broadway or perhaps too rarified, Bridges of Madison County has been unable to attract a sufficient audience since opening in late February. It needed a Tony nomination for Best Musical, the only category that really triggers ticket sales, and it was passed over for lesser shows. (Yes, I’m glaring at you, Beautiful.)

Actually, the adaptation and production are too big, for in an attempt to widen the focus of the show, Norman puts needless emphasis on farm wife Francesca’s family and neighbors. It meanders off on a tangent to the Illinois State Fair, where her husband and kids have conveniently gone, and it seems to have no idea how to wrap up the story, so it tries several endings, all unsatisfying.

But when Robert Kincaid ventures down the Johnsons’ driveway in search of directions to a particular elusive bridge and Francesca offers him some Midwest hospitality — and more — the chemistry between O’Hara and Pasquale is beyond steamy.

Although she has yet to win a Tony, O’Hara is the reigning female star of Broadway, from her work in The Pajama Game, South Pacific and Light in the Piazza. From her opening number, “To Build a Home,” she is in great voice, later topping herself with a second-act aria of Francesca’s back story, “Almost Real.” But more so than those earlier roles, O’Hara shows here she has become a dramatic actress to reckon with.

Nearly her equal is Pasquale, a virile presence with a rich, textured baritone. Remarkably, Bridges of Madison County marks his Broadway singing debut. Listen to his finale solo, “It All Fades Away” — even if just on the recently released cast album — and you know he can have a major musical theater career if he wants it.

Still, the triumph of Bridges belongs to composer-lyricist-orchestrator Brown, who keeps growing in musical sophistication and assurance, even if he has yet to write a show that catches on with a mainstream audience. It seems likely that he will pick up his second Tony for Best Score (after his 1998 win for Parade), but that seems like small consolation after this underappreciated show has had to close its doors and burns its bridges.

Music: The very last concert Franz Joseph Haydn attended in his life was in March 1808, about a year … END_OF_DOCUMENT_TOKEN_TO_BE_REPLACED

Film: Major League Baseball culminates each season with the World Series, but to find the true … END_OF_DOCUMENT_TOKEN_TO_BE_REPLACED