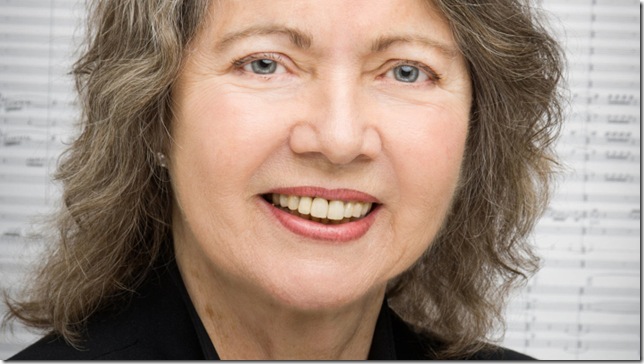 The life of a composer is something like that of a permanent student, says Ellen Taaffe Zwilich.

Which will come in very handy this week when the eminent American composer confers with some young practitioners of the craft at Lynn University’s New Music Festival.

“I’m always learning. I think that’s one of the fun things about what I do,” Zwilich said last week. “I always think of everything I’m doing as a learning experience. Composing music is not something you learn how to do if you can do it. It’s not like making a table … It’s something you’re always discovering. It’s a constant evolution.

“So I will go up to Lynn to learn something. I guarantee you I will learn at least one or two things while I’m there,” she said.

Starting Wednesday, Zwilich will be the special guest of the Lynn festival, which has been organized for 10 years by pianist Lisa Leonard [full disclosure: I’ve served on a critics’ panel for two of these festivals]. The festival opens Tuesday night with a concert of music by Lynn composition students, and on Wednesday night, Zwilich will conduct a master class with those composers.

Thursday night is an all-Zwilich concert featuring five of her works, and on Friday, the Canada-based Penderecki String Quartet performs the Third String Quartet of its namesake, Polish composer Krzysztof Penderecki, during an “informance” in which it will explain how the quartet goes about rehearsing a piece for a concert.

Past featured composers in the Lynn festivals have included David Noon, Shirley J. Thompson, Donald Waxman and Kenneth Frazelle. For this 10th anniversary iteration, Leonard has chosen one of the best-known of the senior generation of American composers, a Pulitzer Prize winner who also happens to be a native of South Florida.

Born in Miami in 1939, Zwilich attended Coral Gables High School, where she distinguished herself as concertmistress of the school orchestra and first-chair trumpet of the school band. “We had two band — one of which was fantastic — we had an orchestra, we had two choruses, we had three music teachers. We had behind-the-screen auditions, at Coral Gables High School in the 1950s,” she said, lamenting the more or less parlous state of general music education in the public schools today, a topic Zwilich says makes her “livid.”

She earned bachelor’s and master’s degrees at Florida State University and then spent several years as a violinist under Leopold Stokowski at his American Symphony Orchestra. She then made her way to the Juilliard School, where she was mentored by Elliott Carter and Roger Sessions, and where she became the first woman in the New York school’s history to earn a doctorate in composition.

The French conductor and composer Pierre Boulez, who died last month, gave Zwilich her first major recognition when he programmed her Symposium for orchestra in 1973. Ten years later, she won the Pulitzer for her Symphony No. 1 (she has written four more since then). In addition to the symphonies, she has written numerous concerti for a wide variety of instruments — and said she wants to compose one for double bass next — as well as numerous chamber works, choral pieces and songs, though she has not tried her hand at opera.

She continues to write steadily, having just finished a new work for the Kalichstein-Laredo-Robinson Trio, and suggests that she wants to emulate the career longevity of her teacher Carter, who was 103 when he died in 2012, not long after finishing a piano trio and while still enjoying life to the fullest.

“Elliott Carter was 102, and the French consulate in New York gave him some kind of honor, ribbons around the neck, that sort of thing. They had a small party, and I was invited. Elliott knew everybody in the room,” Zwilich said. “He gave his acceptance speech in French, but the thing that sticks in my mind is that somebody took a picture of me leaning over his wheelchair, and when I saw the picture, I realized that here was this 102-year-old man, and he had a glass of champagne in his right hand.

Zwilich, who lives in New York and Pompano Beach, modified her style from her early days, becoming more lyrical, neo-Romantic and accessible as the classical music world itself started to leave behind the serialism of the 1950s and 1960s. Today’s music scene, she says, is “very open right now,” though she adds that there weren’t that many academic serialists even in its heyday; for every Milton Babbitt there was an Alan Hovhaness or a Gian-Carlo Menotti, she said.

“Sometimes one feels that students today are writing for the music to be looked at, not played,” said Zwilich, who holds the Francis Epps Distinguished Professor of Composition chair at her alma mater, FSU. “And there are certain things you see, like successions of meter changes every bar … which looks really, really complicated but often doesn’t sound so good.

“To make music, whether you’re writing it or performing it, has to engage the whole human being, your intellect, your feelings, your soul, your gut. It has to have an aesthetic value,” she said. “If it doesn’t have all these things, it doesn’t really click.”

The works featured on Thursday night’s program were written over the years 1979 to 2010, and include her Chamber Symphony, Piano Quintet, Episodes for Violin and Piano, Lament for Solo Piano, and Lullaby for Linus, from her Peanuts Gallery, a series of pieces inspired by the Charles Schulz cartoon, and written after Schulz had name-checked her in one of his cartoons (he sent the original to Zwilich afterward). Zwilich said she hopes that the students playing these pieces will inhabit them as fully as they can.

Of course you want things to be done right,” she said. “But once you get past that point, I love it when performers bring their own dramatic ideas to the table. My happiest moments in my musical life are when I feel that a performer owns the piece, not me. I might have written it, but they have taken it into their bloodstream somehow.”

Today’s compositional scene is a busy, vibrant one, with young composers getting steady work and groups such as Alarm Will Sound, Eighth Blackbird and Miami’s own Nu Deco Ensemble giving classical music a kind of cutting-edge, hip cachet it has rarely had in the modern era.

“This is so much better than doing something else with your life and hoping to find some space to do the things you really like to do,” she said of these scrappy groups. But Zwilich worries about the size of their audiences, given the dominance of the pop music industry and a lack of general exposure in the listening public to a wide variety of music.

“I see a lot of young performers, and the level is very high. The level is very good, but it’s a minority of people,” she said. “The issue that bothers me is the deprivation of the people who haven’t had the opportunity to hear it … It’s not just classical music, it’s jazz. And world music. How many kids have heard a gamelan? How many kids have heard a wonderful jazz combo?”

She remembers her own career, starting out in the face of urgent discouragement from concerned friends and family about her decision to pursue a career in composition.

That decision has taken Ellen Taaffe Zwilich on an impressive life trajectory, and it’s one she still thoroughly enjoys.

“I think that’s one of the wonderful things about the arts. It’s not something you learn how to do and then just do it, for whatever reason,” she said. “It’s a lifelong journey.”

Music: The very last concert Franz Joseph Haydn attended in his life was in March 1808, about a year … END_OF_DOCUMENT_TOKEN_TO_BE_REPLACED

Film: Major League Baseball culminates each season with the World Series, but to find the true … END_OF_DOCUMENT_TOKEN_TO_BE_REPLACED