Sometimes, the universe opens a window to a new world: If we step through it, our lives are changed.

And sometimes, we just have to return a pager.

Dr. Marvin Mordes was doing his neurology residency in Philadelphia, and had to bring a pager to his co-resident, who happened to be at an art gallery.

“After I met my co-resident, I couldn’t leave the gallery because the skies opened up. It was like a hurricane outside,” Marvin said. “The gallery owner talked to me for two hours, and I felt an epiphany, like something deep down inside me was uncovered. I ended up buying a Mark Toby drawing on paper for $4,500.”

“When he brought the drawing home, I told him to take it back,” she said. “That was more money than he earned in a whole year.”

Nothing doing, as it turned out. “That was in 1975, and that was the beginning of the infectious disease of collecting art,” Marvin said, chuckling.

Since that day 35 years ago, the couple has become leading collectors of contemporary art, patrons and donors to museums,  and speakers at art fairs. They even conduct their own international art tours — called Art Adventures — for a select number of friends, collectors and curators. 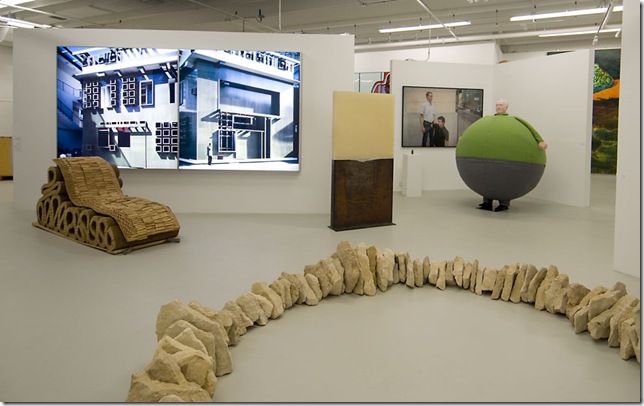 But perhaps the most interesting thing about the Mordeses is that three years ago they reconfigured their personal living space into a private art museum. Elayne drew on her training in art and architecture to convert an old dental laboratory on Australian Avenue in West Palm Beach into their space for living and for art.

On the windowless street-side is the museum, and the living quarters are positioned at the rear, and more private, area of the building, which has 11,605 square feet of space.

The museum, called Whitespace — The Mordes Collection, is a shrine to cutting-edge art, said Kara Walker-Tomé, an independent curator known for her annual Showtel and 10×10 exhibitions.

“Elayne and Marvin Mordes have an impressive collection of contemporary art,” Walker-Tomé said. “Whitespace is essentially a treasure trove of high-caliber artwork by international artists. It has been the best-kept secret in town.” 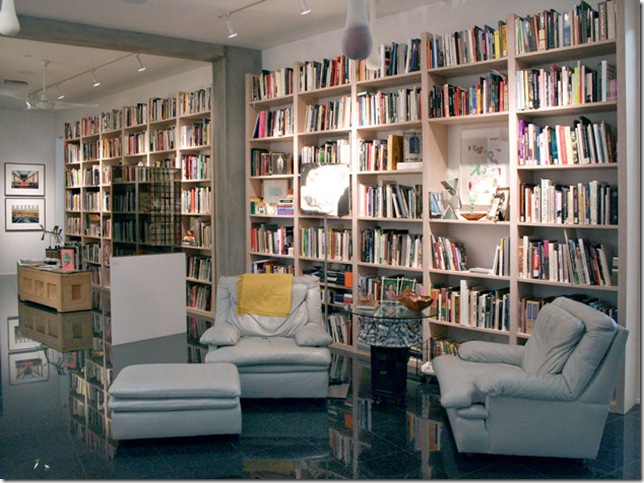 Lining the long, wide hall that leads to the master bedroom and guest suites are floor-to-ceiling bookcases filled with a collection of art books. These, along with a plethora of art magazines, are used for research.

From the living area, an immense swinging door easily turns on its axis to reveal hundreds of works of art in the museum. Elayne throws up her arms and exclaims: “You don’t own the collection, the collection owns you!”

A wide variety of styles and ideas is on display in the collection. Bath Stone Circle (1992) by the British artist – and Turner Prize winner – Richard Long (b. 1945) creates a feeling of walking in nature, an almost meditative atmosphere that comes from the circular geometric shape as it contrasts with ochre-toned spike rocks. An environmental artist, Long’s works are in collections in Japan, Iceland, Italy and India, as well as San Francisco, and he creates them in museums and outdoor locations.

One common thread throughout the collection is the intriguing and mysterious role that art presents in our lives, and the different interpretations that can be made depending on each viewer’s life experiences.

The Artist Who Swallowed the World (2006), by Austrian artist Erwin Wurm (b. 1954), is a large, rotund sculpture of a man dressed in a bright green shirt, perhaps a commentary on the amount of information people digest daily.

The celebrated Canadian-American artist Frank Gehry’s work is here in the Mordes museum, too, in the form of a corrugated-cardboard chaise longue called Bubbles (1988). In this work, Gehry shows the same sense of design and use of space that can be seen in his major buildings, such as Bilbao’s Guggenheim Museum, Los Angeles’ Walt Disney Concert Hall, and the Experience Music Project in Seattle. 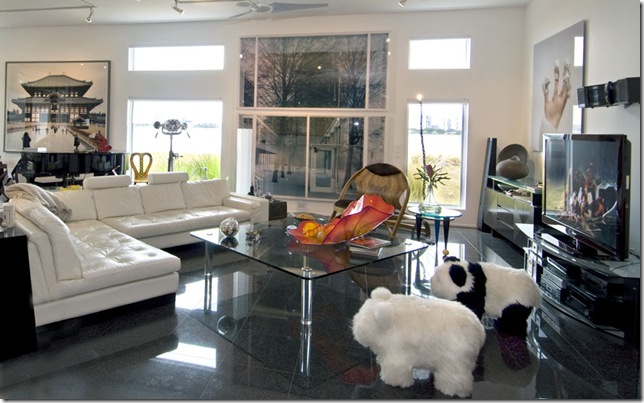 The loft-like living area, which overlooks Lake Mangonia, is also filled with art, and here the Mordeses have left the furniture sleek and simple to keep the focus on the art. One chair stands out, with its large sculptural shape and burled wood: Chair Chair (1987-90) in red oak, Formica, cowhide and painted steel by American artist Richard Artschwager (b. 1923).  A bare lightbulb hangs from a soldered metal chain over the chair; it’s titled Hanging Lamp (1988) by Austrian artist Franz West (b. 1947).

Positioned symmetrically in between the windows is an immense chromogenic print, a photograph of a cold winter scene and architecture by German photographer Sabina Honig (b. 1944). The print is framed in an architectural manner, and the perspective is so radical that it gives the feeling that one is looking through a window at the scene and could step right into it.

On the large square glass coffee table, an orange Dale Chihuly wavy glass sculpture sits in front of a television monitor with an image that looks like The Raft of the Medusa by French Romantic painter Théodore Géricualt.  But on closer inspection, the image is not the painting and not a photograph, because small movements can be detected in the people.

The scene was created in 2008 by American-born artist Adad Hannah (b. 1971) who used people in 100 Mile House in British Columbia to pose as models. Each held his or her pose for up to 10 minutes to create the video production, which was featured at the Toronto International Art Fair. The Mordeses bought a Blu-Ray video of the project.

Over the grand piano, a photograph by German photographer Thomas Struth (b. 1954) adds international flair. Gracing the end of the kitchen galley is a photograph by Brazilian native and New York City resident Vik Muniz (b. 1961) in which he created a still-life painting-like photograph from an assemblage of dots cut from magazines. In the collection are several of Muniz’s works, including one of his most recent pieces, Medusa (After Caravaggio), which was recreated from large pieces of junk.

“Vik Muniz is exciting and stimulating,” Elayne said. “It is sculpture, painting; he even created a piece using dust balls that he collected from a museum. His work is not static, it’s always changing.” 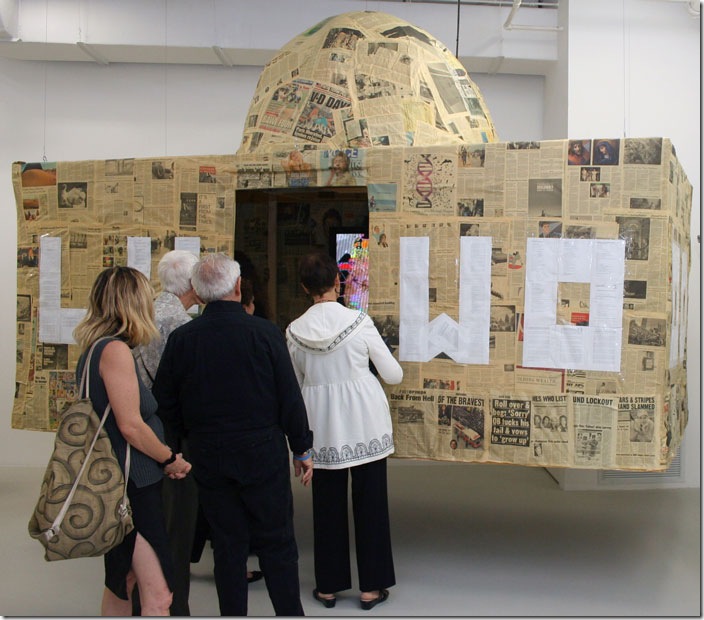 Once a year, the Marvin and Elayne rearrange the collection. Elayne said the couple recently bought three major pieces that need to be installed: Giant Bent, a large plaster, iron rebar, hemp and graphite sculpture by Thomas Houseago, the Muniz photograph of Medusa, and Donations, by Michael Elmgreen and Ingar Dragset.

“And, last night, I purchased a piece of graffiti art,” she said. “It’s a domino effect; it forces you into all sorts of scenarios.”

In the collection is a wide range of art, including paintings, sculptures, video, ceramics and installations.

“After years of collecting, first starting with prints, paintings, sculpture and books, you start appreciating other things, glass, ceramics, the capability for understanding many types of media. It has expanded my love for all artwork,” Marvin said. “The beauty of something that someone has made by hand gives me the feeling of wanting to own it and look at it. I believe the line between art and craft is nonexistent.”

After being very active for years on the Baltimore art scene, the Mordeses, who have a daughter and two young grandchildren, moved to Palm Beach County in 2001 when Marvin joined the Cleveland Clinic staff in West Palm Beach. They first moved to Jupiter while Elayne searched for a space they could live in and devote to their collection.

Elayne also appraises and acts as an adviser on contemporary art, organizes lecture series and curates exhibitions. It’s something she was well-trained for, having studied art at the University of Maryland, done graduate work in architectural design at Drexel University, and take courses in art appraisal at New York University. She’s now a member of the American Society of Interior Designers and Appraisers Association of America.

Last fall, the Mordeses dedicated a large room in the museum for exhibits to be staged by outside curators, calling it Whitebox. Walker-Tomé, who curated the first exhibition in the space, will handle the next one, called Approaching Nature. It opens Friday and runs through May 9.

“When Elayne approached me with her plan of opening the space to the public through the creation of the Whitebox exhibitions, I was quite excited,” she said. “There are so few galleries or art spaces in Palm Beach County regularly showing the work of regional contemporary artists. This was an opportunity that would benefit the community in a big way.”

Walker-Tomé added that the daring work in the Mordes collection gives her license to showcase similarly edgy pieces for Whitebox.

“I knew I could select artists who are making cutting-edge work, again, showcasing the fact that we have artists in our area who are making contemporary work on the highest level,” she said. “When the space is open for the public during openings and viewing days, they get to see not only Whitebox, but also the whole collection.” 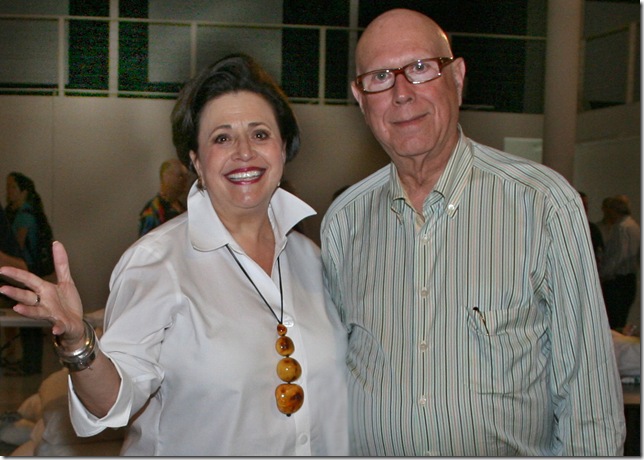 Like true collectors, Elayne and Marvin are always on the lookout for great art.

“Sometimes, by the time we are ready to buy a second or third piece by an artist, the prices are already too expensive,” Elayne said. “So, as we look for new artists, we go to galleries, talk to other collectors and dealers and ask questions. The art magazines are usually the first to notice new artists.”

Collecting art, living with and talking about art, keeps this couple on the move and passionate about their lives.

“This furthers my education in everything,” Marvin said. “The bottom line is, I’m looking at things that people have done that I don’t do. It doesn’t necessarily make me richer by owning them, but they have enriched my life. It challenges my mind.

“We want to share what we have done. It’s a reflection of our personality and passion — not an ego trip — but to interest people in the art. Once smitten, it is a tremendous passion,” he said.

And at that, he got up and left to head to the ArtPalmBeach art fair, as Elayne energetically prepared to host a dinner at their home for all the art speakers at the fair.

“It is our mission to share our contemporary art, to share with people what is on the scene today,” she said. “We don’t really own all this. We take care of it while it is in our care.”

Private and public tours of Whitespace – The Mordes Collection are available, and can be booked online at  www.whitespacecollection.com. Reservations must be made as space is limited, and drop-ins are not permitted. The WhiteSpace/Elayne and Marvin Mordes Collection is located at 2805 N. Australian Ave. in West Palm Beach. Admission is $12 on public days. Proceeds benefit the Community Foundation of Palm Beach and Martin counties. Visit the Website or call (561) 842-4131.

Film: Playwright August Wilson began his chronicle of the African-American experience throughout the … END_OF_DOCUMENT_TOKEN_TO_BE_REPLACED

Film: Just in time with the opening of movie theaters in Palm Beach County comes the season’s most … END_OF_DOCUMENT_TOKEN_TO_BE_REPLACED

Music: The very last concert Franz Joseph Haydn attended in his life was in March 1808, about a year … END_OF_DOCUMENT_TOKEN_TO_BE_REPLACED