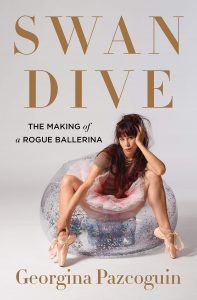 So much time has passed since the curtains on stages were drawn closed and the doors of theaters were shut tight. Needless to say, those of us who thrive on the live performances of the local dance seasons have been in a state of dismayed withdrawal.

So, how to survive this cavernous gap that we have been enduring since shutdown in early 2020? And how to bridge the remaining time until the highly anticipated return of our favorite dance performances in early 2022?

Take a dive into Swan Dive. This book about the inside world of ballet will keep you entertained, especially if you have ever wondered what really goes on behind those heavy, velvet stage curtains in order to get the show onstage — in all its glory — so we can just lean back in our plush seats and enjoy.

Swan Dive, by first-time author Georgina Pazcoguin, reads like a personal journal as it details her climb from a young, yearning ballet student to a seasoned soloist at New York City Ballet (NYCB), one of the world’s most respected and well-known ballet companies. But it wasn’t an easy ride. To get to this level of stature in ballet isn’t easy for any dancer, but it is especially difficult if you are a female who isn’t rail-thin and pale white.

Pazcoguin is not your run-of-the-mill ballet dancer. She is definitely and defiantly outspoken. Ballet does not encourage women to be courageous and speak out but that is exactly what Pazcoguin does in Swan Dive. She is a dedicated and ardent bun-head in the studio, but out of it, she doesn’t mince words to describe the numerous interactions she has had to endure because her look didn’t adhere to the company’s “aesthetic” — Pazcoguin has a more athletic build and is of mixed race (her father is Filipino and her mother is Italian).

Her writing style, filled with spunk and wit, is easygoing and easy reading. Pazcoguin’s stories spin out in a random manner and she comes across as a renegade: Like that “bad girl” at Catholic school who swore and wore her skirts too short, the one who smoked in the bathroom and was always testing the boundaries.

Many of her tear-off-the-bandage exposure of events and her personal confessions are footnoted, and if you look at the bottom of the page, she proceeds to offer a disclaimer or even an apology. The footnotes as well as the little comments lurking between parentheses soften the sting and give her away — she is not such a deep-seated rogue. She has a conscience that she is airing, and she cares deeply for her fellow dancer friends — her zany, full-time, pseudo-family.

In the book’s format, there is a little play on theater that I enjoyed. Toward the beginning of the book, there is a mock program, as if it were the playbill for a full-length classical ballet. It has a different font with a border and it includes a short introduction to her memoir, a description of each of the four acts (of her life) and a list of the cast.

I also enjoyed the inclusion of the short stories of Pazcoguin’s memorable faux pas. Each was called “Swan Dive” and numbered 1-12, printed in a smaller font and then interspersed between the chapters. These tales broke the rhythm and gave some light comic relief to the book.

In reading them, I began to truly appreciate the title of the book as a swan dive conjures up a double-entendre for a ballet dancer. The most coveted role for a ballerina is, of course, the lead role in Swan Lake and a dive is what it sounds like: a disastrous fall onstage. It’s every dancer’s worst nightmare — to be upside-down in a tutu.

Pazcoguin’s dedication to and focus on her art form has helped her push through the grueling daily physical training amid all the volatile company drama because, quite simply, she loves to dance. She loves the challenge of it, striving for perfection, but most of all, she loves the adrenaline rush she gets when she is performing.

“Adrenaline is a great f—–g drug. It was the perfect top-off to the full range of emotions I had clawed my way through during the past twenty-four hours.” This is how she starts her story of life as a NYCB company member and throughout the book, her voice remains as bold and gutsy.

At the age of 16, Pazcoguin entered the prestigious School of American Ballet (NYCB’s professional school) fulfilling her long-time childhood dream. A year later, she was an apprentice with the company and the following year, she was made a member of the corps de ballet. According to her, being a member of the corps at NYCB with its Balanchine repertory means non-stop dancing and performances for every female company member.

Balanchine, according to Pazcoguin, “knew the corps could be the company’s secret sauce.” Most of his ballets rely heavily on the corps de ballet’s harmonious presence with its synchronized perfection. “Remove the spirit of the corps from a Balanchine production,” she adds “and what you’ll get is bravura without context.”

Her stories of performing the warhorse of all ballets — The Nutcracker — are in a chapter she calls “The World’s Most Successful Flop.” Every company and every dance studio does countless performances of this ballet in order to fill the coffers, and most dancers would agree that it was The Nutcracker that drew them into a career of dance.

The first performances of this ballet were in St. Petersburg in 1892, but they were not deemed a success. It wasn’t until the 1950s that The Nutcracker became the holiday tradition it is today. Tchaikovsky’s melodious and rich score has always been loved. Why else would you hear it playing in so many stores for weeks and weeks before Christmas?

In 2013, Pazcoguin made soloist, becoming the first Asian-American female soloist in the history of the NYCB. (She also had a brief foray on Broadway playing Ivy in On The Town and Victoria in Cats before returning to perform with NYCB.) Her quick rise was an enormous success. It sounded great in her bio, but it was not quite as it seemed as the book revels in revealing.

It was a time of enormous stress and serious lack of self-esteem. The roles in which she has been cast show that even though she was a talented dancer, she has not really viewed as a classical dancer. A glaring example is that she is the only female soloist who has not had a chance to perform the role of the Sugar Plum Fairy in The Nutcracker despite the fact that there are 47 performances each year and that she has been a soloist for eight years. In 2017, Pazcoguin and former dancer Phil Chan started Final Bow for Yellowface, a campaign to fight against Asian stereotyping in ballets.

In 2018, a scandal erupted at NYCB. Accusations of sexual harassment and physical and verbal abuse at the company ricocheted around the ballet world and led to Artistic Director Peter Martins’s resignation from the leadership role he held for more than 30 years. (Martins has denied all of these accusations.) In the book, Pazcoguin weaves in her own experiences of working for Martins and the required survival mode she had to create in order to exist in the caustic environment he cultivated.

Swan Dive manages to leave a small dent in the armor that has protected this centuries-old art form. Yes, it is brutally demanding physically but it also is laced with inequity and racism that is often propelled by the powerful whim of a ballet company’s usually male artistic director.

NYCB is made up of 350 artistic and administrative individuals. It’s a successful machine and it takes a lot for an individual dancer, a small cog in the machinery, to throw a wrench into the works in hope to shake things up and make a change. It took chutzpah for Pazcoguin to write this book; imagine the courage it took for her to return to work at NYCB a few months after her book was published.

With each “dent” (someone speaking out), a shift is starting to permeate the hallowed halls of ballet academies and companies. In just the last few years, there has been more wokeness in the casting of ballets. Not every evil character is a person of color and it’s possible to see the role of the prince danced by an Asian dancer or the role of the lead ballerina in Swan Lake danced by a Black woman. Slowly, things are shifting in the staid world of classical ballet.

Pazcoguin ends her book with a final chapter titled “Dancers Die Twice.” Here she sensitively addresses the difficulties in preparing for the inevitable end of the low-paying and physically taxing performing career of a ballet dancer and the necessity of switching careers early in midlife.

The adjustment isn’t easy for most. It is hard to leave the world of ballet. It is like an addiction. No wonder the short performing life portrayed in Swan Dive behind the velvet curtains of NYCB is so chock-full of melodrama — and adrenaline.

Film: Playwright August Wilson began his chronicle of the African-American experience throughout the … END_OF_DOCUMENT_TOKEN_TO_BE_REPLACED

Film: Just in time with the opening of movie theaters in Palm Beach County comes the season’s most … END_OF_DOCUMENT_TOKEN_TO_BE_REPLACED

Music: The very last concert Franz Joseph Haydn attended in his life was in March 1808, about a year … END_OF_DOCUMENT_TOKEN_TO_BE_REPLACED