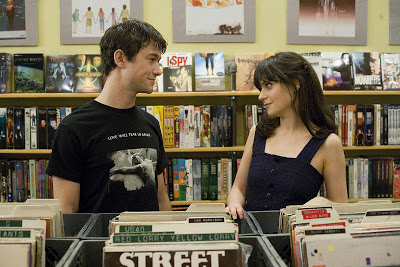 The very appealing, refreshingly inventive (500) Days of Summer announces its intentions from the opening moments. A sober-voiced narrator intones that what we are about to see “is not a love story.”

Implied is the suggestion that we not get involved in the on-again-off-again relationship between greeting card writer Tom Hansen (Joseph Gordon-Levitt) and his independent-minded co-worker Summer Finn (Zooey Deschanel).

There is such palpable chemistry between the two actors it is all but impossible not to root for them to come to their senses and see they were meant to be a couple. Even so, as the film bounces back and forth among the pages of their year-and-a-quarter’s long time together, the days enumerated in a dizzying anti-chronology, we see the extremes of their romantic progress register on Tom’s face — from puppy perky to hang dog.

Director Marc Webb and Tom Hansen are both film-savvy and there are numerous film references throughout (500) Days of Summer, from Fellini to Bergman to a musical number that is almost lifted from Disney’s Enchanted. The most telling reference is surely to The Graduate, which helped cement the last-minute turnaround of romantic fortunes on the big screen.

And even though the detached narrator notes that Tom completely misreads the movie’s message, surely he and Summer will drive off into the Los Angeles sunset together, won’t they?

Screenwriters Scott Neustadter and Michael H. Weber (whose only other screenwriting credit is Pink Panther 2), in further rejection of the rom-com formula, do not even bother to have Tom and Summer meet cute. Their first encounter is a prosaic exchange in an elevator, but that is enough for Tom to become smitten. For her part, Summer makes it clear — well, she tries to at least — that she is not looking for love, does not believe in love, and if it exists, she cannot imagine it lasting forever.

None of this dampens Tom’s ardor, of course, who is certain he has found his soulmate in Summer. He looks back on his time with her, the good — a giddy romp through IKEA, a mystifying visit to a contemporary art gallery, a steamy kiss by the office copiers — and the bad. Tom has the requisite clueless pals, but even they rise above the studio formula. And the most sage advice he receives is from his much younger, soccer-playing sister.

Since his breakthrough on TV’s Third Rock From the Sun, Gordon-Levitt has been gradually building a solid career in indie films. But here he shows he also has what it takes to become a genuine romantic leading man, albeit one riddled by self-doubts. Deschanel too has long been an appealing presence, but (500) Days of Summer could be the film that separates her from the crowded field of young actresses.

For reasons of convenience, Los Angeles may be the most filmed city in the world. Still, Webb chooses locations outside of the usual images of the town that give the movie a look that is as original as its take on romantic comedy.

Only Fox Searchlight really knows why this film — first seen locally in the Palm Beach International Film Festival earlier this year — is being released now. But so be it. (500) Days of Summer may just give summer movies a good name.

Film: Playwright August Wilson began his chronicle of the African-American experience throughout the … END_OF_DOCUMENT_TOKEN_TO_BE_REPLACED

Film: Just in time with the opening of movie theaters in Palm Beach County comes the season’s most … END_OF_DOCUMENT_TOKEN_TO_BE_REPLACED

Music: The very last concert Franz Joseph Haydn attended in his life was in March 1808, about a year … END_OF_DOCUMENT_TOKEN_TO_BE_REPLACED