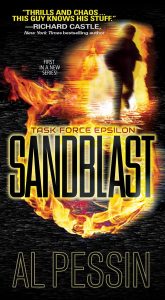 Showtime’s hit series Homeland ends in May. But covert ops fans can now turn to Sandblast, the first book in an action, adventure and suspense trilogy by Al Pessin, a local author who has covered the world’s hot spots from Afghanistan to Washington, D.C.

The plot: after terrorists blow up a plane carrying the secretary of defense, the Defense Intelligence Agency creates Operation: Sandblast. The top secret asset is California-raised, Afghan-American Lt. Faraz Abdallah. His heritage and military training make him the perfect undercover agent, but can he fool the Taliban? Then can he uncover its terror plots and assassinate the leaders?

The president is on board. “We’re facing our toughest threat since 9-11, and if we don’t handle it right, we could end up living in a very different world, a much more hostile one.”

Besides the intrepid Lt. Abdallah, the other hero is military and security expert Dr. Bridget Davenport, in a role similar to Carrie Mathison. “She would tell herself they were key players in their generation’s great battle of Good vs. Evil…”

The book moves fast and the complex plot makes sense. Pessin is most persuasive describing how tough it is for Faraz to maintain two identities at once. He has to fit in, quote the Koran, remember his emergency extraction code, avoid recruitment as a suicide bomber and not be subsumed by the Taliban.

The Afghan village scenes are plausible. “It does not matter if you die, or if I die, of if we all die, or if our families live in poverty for one hundred generations. What matters is that we work to do Allah’s will.”

Pessin offers many authentic details at the Pentagon. An outdoor snack bar in the giant, center courtyard is “…nicknamed the Doomsday Café and said to be ground zero for Russian nuclear missiles.” Meanwhile, a “secure conference room” is called “The Tank.” Bridget’s windowless office in “the second basement … is bigger than a cubicle with room for a small table and four chairs.”

Despite her drab office, the Pentagon has its compensations. Bridget is “… an attractive woman in a building where twenty-five thousand men worked.”
Better odds than The Bachelorette! Very promising.

For three months, Bridget has been seeing a handsome man in uniform. But when the two debate whether to call each other sugar pie or sweet cakes, the book hits its only false note.

Otherwise, Sandblast reads like the real deal, because Pessin did a tremendous amount of research and because his background resembles that of spy novelist and Washington Post foreign affairs columnist David Ignatius. (In person, Pessin calls to mind CNN reporter Wolf Blitzer in appearance and manner; they’ve been everywhere, know everyone and have a dry sense of humor. And despite highly successful media careers, both give the impression they know lots more than they let on.)

Pessin was a journalist at Voice of America for 39 years; 15 of them overseas. His first foreign assignment was Hong Kong in 1984. He’s also worked in Pakistan, Guantanamo Bay, Ukraine (in flak jacket and helmet), Jerusalem, London and New York. He enjoyed his first six-month tour in Islamabad so much, he offered to stay longer.

One of Pessin’s proudest moments came in 1989, when China expelled him for covering the Tiananmen Square massacre. He also reported from the White House and the Pentagon, traveling with two defense secretaries to Iraq and
Afghanistan.

“[Years later], when I returned for a visit to Islamabad, I went to the old market and it was tense. All eyes were on me. I was the only foreigner there.”

Pessin speaks some French, Spanish, Hebrew, Arabic, Mandarin and Cantonese. “I wanted to know if the side conversation was discussing lunch or about kidnapping me and selling me to Hamas,” he said.

He said in Gaza and the West Bank, “Being Jewish was never an issue. No one asked. I felt they didn’t know.”

Pessin was inspired to write Sandblast during his six years at the Pentagon, when he came across an outdoor naturalization ceremony for people who joined the military as legal residents and were then being sworn in as citizens. Their happy and proud families were dressed in colorful dress from their home countries.

“I thought about what sort of unique capabilities they bring to our military. They are our generation’s new Navajo code talkers [from World War II.]”

Pessin retired in 2015 and moved to Delray Beach. He credits the Writers’ Colony at Old School Square and the Palm Beach Community Educator program for teaching him creative writing. “Non-fiction addresses facts. But fiction can uncover the truth.” He also hired two editors to inspect his manuscript.

“I consider ‘Sandblast’ a real find with a fresh perspective and exciting characters. Al is a very multi-talented guy and he has made a lot of smart decisions,” Hamilton said. “He’s ready to break into the big leagues.”

Sharon Geltner is the author of Charity Bashed, available on Amazon and in area libraries and bookstores.

Music: The very last concert Franz Joseph Haydn attended in his life was in March 1808, about a year … END_OF_DOCUMENT_TOKEN_TO_BE_REPLACED

Film: Major League Baseball culminates each season with the World Series, but to find the true … END_OF_DOCUMENT_TOKEN_TO_BE_REPLACED