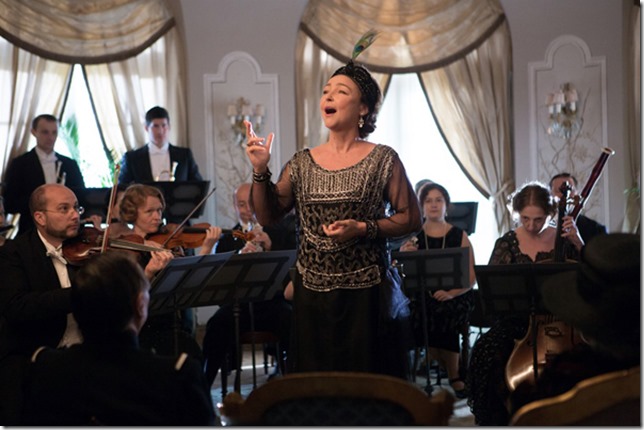 French screenwriter-director Xavier Giannoli knows precisely when the idea for his latest film occurred to him. “Fifteen years ago, I heard on the French radio the voice of an opera singer, completely off-key,” he recalls. “And it was incredibly funny, but I felt embarrassed too. Because it was very ridiculous.”

He learned that the voice belonged to Florence Foster Jenkins, a rich American obsessed with opera but utterly lacking in talent. Still, she would perform for her circle of friends, who praised her profusely. And Giannoli knew he had to bring her story to the screen.

“But I was definitely not interested in directing a biopic,” he explains. Instead he created a fictional character, Marguerite Dumont, the central figure in his film, Marguerite. “I kept a lot of real events of Florence Foster Jenkins in her life, but as a painter, I decided to express myself painting this character. Because I think that fiction is the best way to express reality.”

The film opened last weekend at several locations in Palm Beach County, including The Shadowwood in Boca Raton. In France — where Jenkins never performed and was largely unknown — Marguerite received 11 nominations for the Cesar, that nation’s version of the Oscar, winning four of them, including best actress for the film’s star, Catherine Frot.

Marguerite’s story is so far-fetched, it is hard to believe. Still, says Giannoli, “I think it is very important that the audience knows it’s a true story. Because it’s so crazy. That’s where cinema begins for me. At that moment, I start to work, to write, to give reality to everything, every glance, every movement.”

Rather than a broad comedy, Giannoli emphasized the theme of self-delusion. And to a lesser extent, the cult of celebrity, which he had explored previously. “The film I directed just before this, the title was ‘Superstar,’” he says. “It was the story of a face in the crowd who is suddenly well- known, he becomes a celebrity and he doesn’t know why. Throughout the film he tries to understand why there is this picture of him on the Internet and on TV. The more he tries to understand why he is famous, the more he becomes famous.”

As film buffs probably already recognized, the name Giannoli gave his central character is an homage to the comic foil of the Marx Brothers — Margaret Dumont.

Why? “Because the real Florence Foster Jenkins looks like Margaret Dumont,” he says. “And I love the Marx Brothers and their absurd comedy. When I started to write this movie, a friend of mine gave me a photograph of Groucho Marx and Margaret Dumont together in ‘The Cocoanuts.’ And there is another important fact. At the end of her life, Margaret Dumont did not know that the Marx Brothers were laughing at her. She was completely innocent.”

Actress Frot is France’s most popular actress, according to Giannoli. “There is something very special with her. It is that she’s an outsider,” he says. “For me, this fact was important because it’s like Marguerite. Marguerite is an outside in the aristocratic society. And Catherine Frot is an outsider in the star system of France. So there was a connection between Catherine Frot, an actress in France, and Marguerite, the character in the film.”

Asked to name an influence on his work, Giannoli mentions Martin Scorsese. “The first film I saw was ‘Raging Bull’. I was 8 years old and something deeply touched me. I had a Christian education, as you can see from my film. I’m fighting like Jake LaMotta with that upbringing, trying to beat it,” he says. “I think he influenced me more as a writer than as a director, he’s a beautiful author. He’s really, really important for me.”

Like Scorsese, Giannoli packs extremes of emotions in his films. As he says of Marguerite, “There is something very comic and something very tragic in this film.”

Marguerite is currently showing at Movies of Delray, Regal Shadowood 16 and Movies of Lake Worth.

Film: Playwright August Wilson began his chronicle of the African-American experience throughout the … END_OF_DOCUMENT_TOKEN_TO_BE_REPLACED

Film: Just in time with the opening of movie theaters in Palm Beach County comes the season’s most … END_OF_DOCUMENT_TOKEN_TO_BE_REPLACED

Music: The very last concert Franz Joseph Haydn attended in his life was in March 1808, about a year … END_OF_DOCUMENT_TOKEN_TO_BE_REPLACED