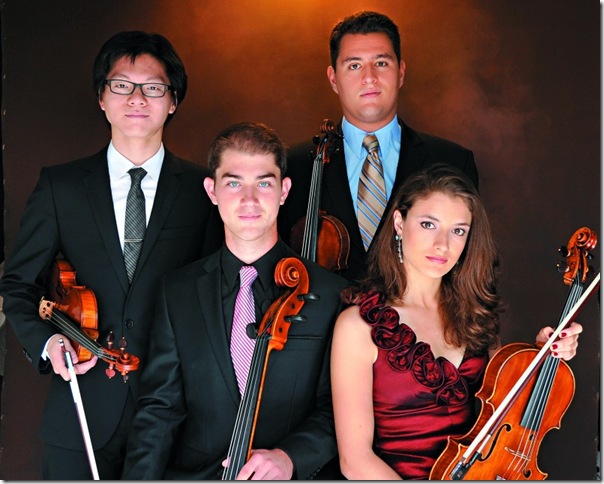 It is almost as though the members of the Dover Quartet, all in their early 20s, holed themselves up with 1960s-era recordings by the Guarneri Quartet, so seamless, elegant and perfect is their playing.

But there should be some room for wider variety and contrast amid all that, and so while one could make the case for this young foursome already being one of the finest quartets on the scene, it was just as clear from their appearance Monday at the Kravis Center’s Rinker Playhouse that they can go much farther .

The Dovers — violinists Joel Link and Bryan Lee, violist Milena Pajaro-van de Stadt and cellist Camden Shaw — met at the Curtis Institute and formed their quartet, which earlier this year took all the major awards as the Banff Competition in Canada, one of the world’s most prestigious such contests. It’s not hard to hear why: Its concert of two American works and a canonical Schubert quartet was as excellent as its acclaim had promised, and the quartet even had the confidence to present an entirely new work to a reliably conservative Palm Beach audience.

That new work was a quartet the Dovers commissioned from composer Eric Sessler, a New Jersey-born teacher at Juilliard and Curtis (cellist Shaw, in remarks prompted by audience member Jan Winkler, said Sessler taught some of the members counterpoint); it was first performed in October, meaning the pages are still virtually wet from the printer’s inkjet.

And it is a very fine piece of contemporary string quartet writing. Oriented around guitar tunings, this vigorous, bright music was redolent of ninths in particular, and that gave it an attractive, warm sound overall. But it didn’t pander to pop styles — Sessler has managed to write an integrated American music that while tonal, is recognizably of its time, and pays homage to the heritage of the quartet (particularly Dvořák) while not being pastiche.

Sessler’s four-movement quartet follows relatively traditional lines as far as general character, too: A forceful, energetic first movement, tender and reflective second, a lighthearted third and an all-out finale. It offers each of the four players spotlight work, and the generally pastel colors of Sessler’s writing showed them off well.

In the second movement, the Dovers demonstrated their exceptional ensemble as they moved seamlessly from a loud to a soft dynamic in the space of a millisecond, and in the third, violinists Link and Lee played a charming Scotch-snap phrase over chattering pattern in viola and cello that was most effective. So, too, was the opening of that movement, in which the four players were admirably unified for a series of slides up and down, which, because of the serious approach this group has to its work, did not sound comic or like a stunt, but instead like an invitation to listen further.

Surely this is as close to an ideal performance of this music as could be hoped for, and Sessler must be delighted. The quartet performed it with an ease and mastery that suggested long acquaintance with the music, and yet its premiere was only two months ago.

The Sessler came second on the program, after the lone String Quartet (Op. 11) of Samuel Barber, with its seemingly immortal second movement, better known in its string orchestra guise as the Adagio for Strings, a work that has become America’s unofficial state music of mourning. The two outer movements (or one movement, interrupted by the Adagio) are very different, dramatic and aggressive, full of sudden silences and abrupt fragments.

From the opening bars, the Dover’s basic excellence was obvious — intonation and ensemble were absolutely precise, and the music was interpreted with flair and personality. The famous Adagio was immensely touching, with the players giving it a very quiet, intensely intimate reading; no hugeness at the climax, with its continually shifting chords underneath violins in high register.

But perhaps there should have been. As marvelous as they are, the Dovers’ emotional range seems rather narrower than it has to be. The quartet would benefit with a small helping of extravagance for its menu, so that the music could get its widest range of color and contrast. Only violist Pajaro-van de Stadt played with that kind of energy and shade, and her terrific contributions stood out as much as the champagne-pink dress she was wearing next to the somber blacks of her three male colleagues.

The Schubert Quartet No. 13 (in A minor, D. 804, Rosamunde) that took up the second half encapsulated the quartet’s great gifts and its limitations. The opening theme was as hushed and as mysterious as I’ve ever heard it, and the effect was almost chilling. The development section had strength and majesty, and Link and Lee played their solo rising lines after the triad motif in tempo without rushing them, which is a hazard of this particular piece.

The second movement was gentleness incarnate, and in the midsection, all the rising triplets were handed off spotlessly from one instrument to another. Cellist Shaw began the Minuet with a murmur, keeping the air of mystery that had shrouded the music since its inception, and indeed, the dance itself had an almost-bitter feeling. The trio, though beautifully played, stayed in the half-light and had too little contrast with the Minuet.

The finale had a good sense of rhythm and swing, and here again, the more virtuosic elements of the writing were a seamless part of the whole, tossed off with seeming ease and betraying not a whit of struggle. This was especially true of Link, who in the last section of the movement, plays a role similar to the older-fashioned 18th-century string quartets, which were more or less solo pieces for the first violin with minimal accompaniment. But it didn’t come off that way here; Link plays like a team member rather than a showboater, and this is part of the secret of the Dover’s remarkable consistency of sound.

It’s clear that the Dover Quartet has a splendid career ahead of it, with wonderful musicianship allied to programming courage and total dedication to the effort. What it needs now is to move away from its hermetic perfection and bring more life and variety into its playing. There is such a thing as too controlled, and should the quartet loosen up just a bit, its performances could be not just technically superb, but transcendent.

Film: Playwright August Wilson began his chronicle of the African-American experience throughout the … END_OF_DOCUMENT_TOKEN_TO_BE_REPLACED

Film: Just in time with the opening of movie theaters in Palm Beach County comes the season’s most … END_OF_DOCUMENT_TOKEN_TO_BE_REPLACED

Music: The very last concert Franz Joseph Haydn attended in his life was in March 1808, about a year … END_OF_DOCUMENT_TOKEN_TO_BE_REPLACED