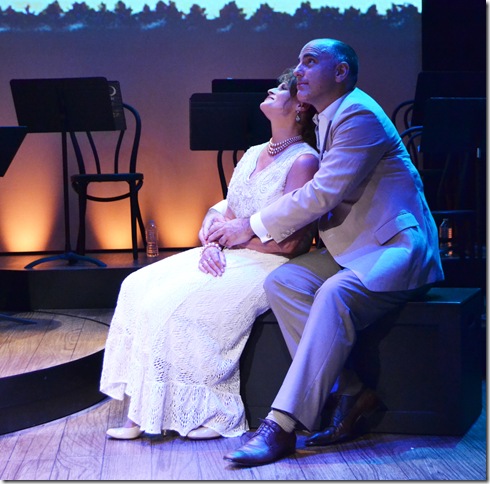 From the 1970s — Stephen Sondheim’s most creative period, the decade of his major collaborations with director Harold Prince — comes A Little Night Music, their lush, irony-fueled tale of the follies of love. It kicks off Palm Beach Dramaworks’ latest summer of staged concerts, a hybrid format that trades in scenic challenges for evocative, stage-wide projections and focuses in on the music and lyrics.

In the case of Night Music, based on Ingmar Bergman’s 1955 film comedy Smiles of a Summer Night, that is exactly where the emphasis should be. Sondheim’s score brims with waltz tempos, since he gave himself the challenge of writing only in three-quarter time and its multiples. That is hardly a limitation for the reigning composer-lyricist of Broadway, who turns out ballads, interior monologues, mood pieces and patter songs, all with his signature intricate wordplay and complex emotions.

The story is set in Sweden, where lawyer Frederik Egerman tries to rekindle an affair he once had with the renowned stage actress Desirée Armfeldt, now middle-aged and reduced to second-rate tours through the provinces. Complicating matters for Egerman is his 11-month, unconsummated marriage to young Anne and the inconvenient arrival on leave of Carl-Magnus Malcolm, a hot-tempered dragoon who is Desirée’s latest dalliance. And then there is Egerman’s somber seminary student son Henrik, who harbors unexpressed romantic feelings for Anne. 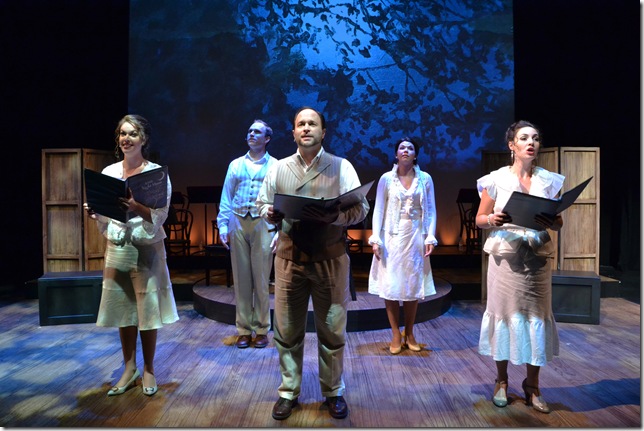 The characters couple and uncouple, changing partners as they go, particularly in the second act, which relocates to the country estate of Desirée’s mother, the outspoken, wheelchair-bound Madame Armfeldt. She had her share of romantic entanglements in her day and now observes the foolishness around her with sardonic bemusement.

Helming the concert is director-choreographer Lynnette Barkley (of PBD’s Les Liaisons Dangereuses), who sets matters in motion from the beginning with a “Night Waltz,” which foreshadows events of the evening. Setting the operetta-like tone is a quintet of voices, sort of a Swedish chorus that comments along the way and is resourceful with needed props. 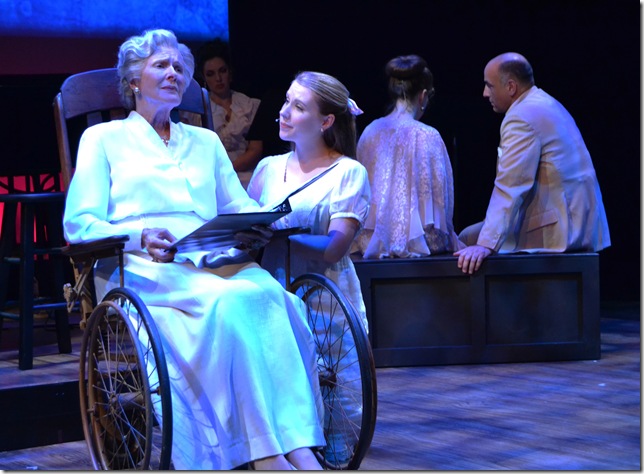 The Big Song of the show, Sondheim’s best-known composition, is the overexposed “Send in the Clowns.” Kim Cozort Kay (Desirée) sings it well enough, but it is the way she acts the lyric, commanding us to listen to its content, that makes the number such a showstopper. William Michals, a fixture of Dramaworks’ concerts (Man of La Mancha, Most Happy Fella) impresses again as Egerman, expressing himself in legalese in his opening song, “Now,” and confronting Carl-Magnus (booming Aloysius Gigl, the superb Javert of the Maltz Jupiter’s recent Les Miz) on “It Would Have Been Wonderful.”

The usually loose-limbed, manic Clay Cartland plays against type as uptight Henrik and newcomer Ruthie Stephens is a standout as acid-tongued Charlotte, Carl-Magnus’s wife, who takes Anne under her wing for her own purposes. From the original cast of Night Music comes Joy Franz, now graduated to the role of Madame Armfeldt, putting a wry spin on her solo, “Liaisons.” And the whole company is in fine voice in the dramatic climax of the first act, the sublime “Weekend in the Country.”

Locale and mood are suggested artfully by Sean Lawson’s projections and musical director Kevin David Thomas handles the piano accompaniment deftly, augmented by violin, cello and a bit of oboe. Fortunately, the production has been extended for a week, through July 26, so go and enjoy a fine summer night’s entertainment, a fitting musical parallel to the plays on which Dramaworks has built its reputation.

Film: Playwright August Wilson began his chronicle of the African-American experience throughout the … END_OF_DOCUMENT_TOKEN_TO_BE_REPLACED

Film: Just in time with the opening of movie theaters in Palm Beach County comes the season’s most … END_OF_DOCUMENT_TOKEN_TO_BE_REPLACED

Music: The very last concert Franz Joseph Haydn attended in his life was in March 1808, about a year … END_OF_DOCUMENT_TOKEN_TO_BE_REPLACED