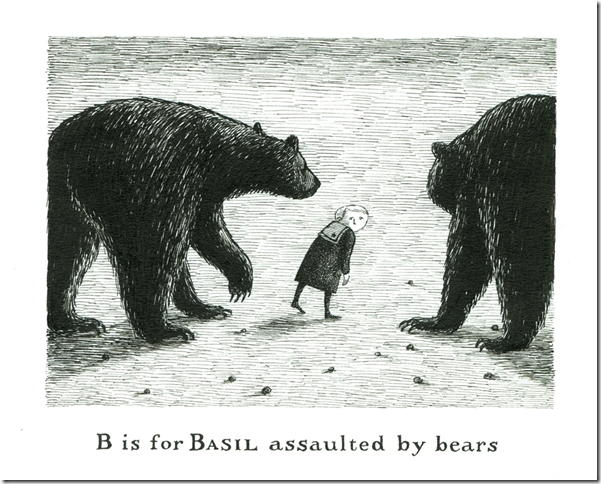 The average museum visitor spends about 20 seconds looking at a work of art, but if you follow that guideline when you visit Elegant Enigmas: the Art of Edward Gorey, you’re going to miss a lot.

The exhibit, which runs at the Norton Museum of Art until Sept. 2, contains more than 150 of the artist’s befuddling illustrations, sketchbooks, illustrated envelopes, book cover ideas and theatrical costume designs. Many are puzzling in ways not immediately evident. For example, what are those two disencumbered hands doing in the forefront of Lord Wherewithal Was Crushed? And, isn’t B is for Basil Assaulted by Bears an odd — even gruesome — way to illustrate an alphabet book for children?

These grim surprises are part of Edward Gorey’s unique appeal. If his name doesn’t ring a bell, you may recognize his work because he created the darkly witty illustrations that were animated for the opening and closing sequences of the long-running PBS Mystery! series. (See that video here: http://www.youtube.com/watch?v=tPlY_7RR1h0&feature=related).

Apart from work done for others, he prolifically wrote and illustrated more than 100 books of his own, often under clever anagrams of his name, such as Ogdred Weary. Like many historically profuse artists, such as Michelangelo, he enjoyed solitude, never married and didn’t have any children. He was also seemingly purposefully vague about his sexual orientation, evading reporter’s inquiries with responses such as, “I’m not sure if I’m gay.” 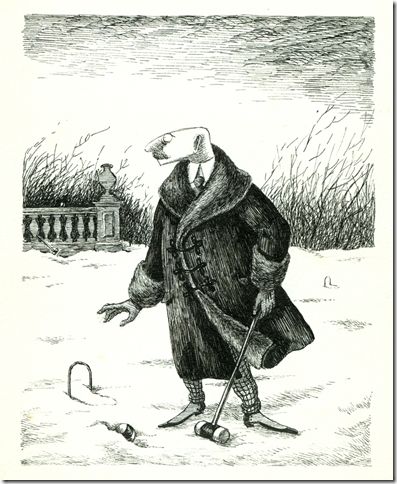 Though original, Gorey’s oeuvre is most like those of Maurice Sendak and Shel Silverstein, who were working at the same time. Like them, he became a globally recognized brand with a cult-like following compelled towards his imaginary world where nonchalant figures, dressed in Edwardian and Victorian garb, somehow manage to look simultaneously disinterested and alarmed, such as Mr. C(lavius) F(rederick) Earbrass in The Unstrung Harp. And even though his subject matter is grim, his work is as equally endearing as that of Sendak or Silverstein.

Gorey died in 2000 at 75. He had most aptly described himself as “whimsically macabre” and that’s precisely what made his art unique. Above all, it’s funny. Yet to find the wry humor you might have to use one of the magnifying glasses that rest on small ledges below the works alongside copies of his small books. Gorey worked to scale, so the Norton’s ingenious visual aids are welcomed, especially if you’re over 12, as visitors of every age gleefully search for Gorey’s enigmas the same way they look for Al Hirschfeld’s Ninas.

Many people mistakenly thought Gorey was British, but he wasn’t. They also thought “Gorey” was a pen name, but it was his birth name. He was born in Chicago and lived most of his life in Cape Cod. The home he inhabited now houses his museum. He was a natural talent and a self-taught artist. He’d gone to Harvard, not to study art, but French. His work remains relevant and continues to influence many artists, including filmmaker Tim Burton. 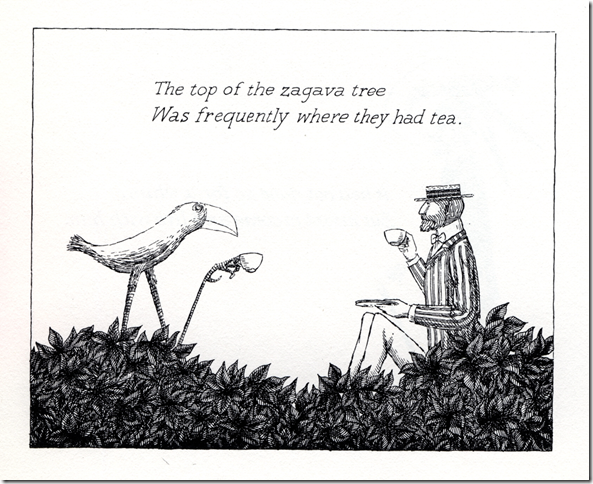 Gorey’s biographer, Karen Wilkin, pinned him as a Renaissance man because he also won a Tony Award for Best Costume Design for the 1977 Broadway production of Dracula. He was quirky. He loved cats. He often attended ballet performances wearing a long, bulky fur like the kind you’d see in a 1940s Hollywood movie. According to the Paris Review, Gorey left his estate to animal rights groups because he, “…felt guilty for wearing their furs.” His curious personality profoundly impacted his art.

The Norton’s recent renewed emphasis on the “visitor experience” brings this distinct personality and unique style to life in Elegant Enigmas because Gorey’s illustrations are complemented by his books, comfy seating, a Gorey-esque photo op and family-friendly, Gorey-inspired drawing stations.

And, even though Gorey is quoted in the accompanying catalog as saying it was his life’s mission to, “…make everybody as uneasy as possible…,” the Norton here demonstrates how to endearingly curate curmudgeonly art.

Jenifer Mangione Vogt is a marketing communications professional and art writer. Visit her blog at http://www.fineartnotebook.com

Elegant Enigmas: The Art of Edward Gorey is on view at the Norton Museum of Art until Sept. 2. Hours for this exhibition are Tuesday, Wednesday, Friday and Saturday from 10 a.m. until 5 p.m., Thursdays from 10 a.m. until 9 p.m. and Sunday from 1 p.m. until 5 p.m. Admission is $12 for adults, $5 for visitors aged 2 through 13, and free for children under 13. Palm Beach County residents receive free museum admission on the first Saturday of each month. For more information call (561) 832-5196, or visit www.norton.org.

Film: Playwright August Wilson began his chronicle of the African-American experience throughout the … END_OF_DOCUMENT_TOKEN_TO_BE_REPLACED

Film: Just in time with the opening of movie theaters in Palm Beach County comes the season’s most … END_OF_DOCUMENT_TOKEN_TO_BE_REPLACED

Music: The very last concert Franz Joseph Haydn attended in his life was in March 1808, about a year … END_OF_DOCUMENT_TOKEN_TO_BE_REPLACED