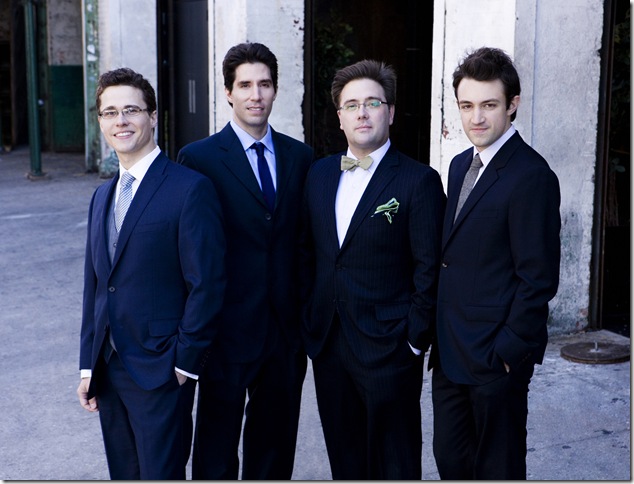 Of the many string quartets that have visited Palm Beach in the past 10 years, the Escher String Quartet has accolades a-plenty: the prestigious Avery Fisher Career Grant, artists-in-residence at the BBC and the Chamber Music Society of Lincoln Center. Close on 10 years old as a group, they take their name from the celebrated Dutch graphic artist M.C. Escher.

This very serious string quartet wore business suits and brown shoes, but they played as demons possessed. The group as it is now constituted has been together for two years. They are Adam Barnett-Hart and Aaron Boyd, violins; Pierre Lapointe, viola; and Dane Johansen, cello.

Beginning their short program with Haydn’s Quartet No. 41 (in D major, Op. 50, No. 6), known as The Frog, we heard flawless playing form these four young men. The group has a warm sound and Barnett-Hart demonstrated his wonderful technique by tackling some very intricate runs with the greatest of ease in the Allegro.

In the second movement (Poco adagio), the first violin he picked out his tune clearly in the highest register while the Boyd and Lapointe worked hard at their double-time accompaniment. Lovely playing of continuous arpeggios followed from Johansen. A four-note tune is quietly echoed around as rivers of wavering notes begin to take over; a sort of folk-music spirit is evoked. The quartet returns to the opening tune of this movement with the cello anchoring the last bars.

The Minuet that followed has some tripping melodic passages at first with some very effective long pauses. I thought it was taken too quickly to be a minuet in the French sense of the word. The finale is marked Allegro con spirito and it had just that: a very spirited opening with more fine playing from the Barnett-Hart. Haydn tries for a few dissonances now and then but the violins bring the music back to the original musical thought as each instrument echoes its neighbor to end in the last few bars.

Stepping to the front of the stage, Boyd gave a short talk on the other piece on the program, Beethoven’s Quartet in No. 14 (in C-sharp minor, Op. 131). He said in part, that Schubert, delirious on his deathbed at age 31 in 1828 asked to hear this work before he died. His wish was granted. Later, Beethoven was asked which string quartet of his was his favorite, to which he replied, “Opus 130 is my favorite, but Opus 131 is my greatest.’’

To my mind, it is a gloomy and sorrowful quartet and I had wished this talented four had chosen Op. 130 for this concert. That said, the seven movements heard were of exquisite beauty musically; Schubert, even in his delirium, knew Op. 131 suited the occasion for a man about to die.

The quartet opens slowly, with maudlin music that tends to wander, seeking an affirmative conclusion. A few chords in unison bring about an ending. The Allegro molto vivace that comes next gets much brighter, even playful, compared to the first movement’s dirges. In the Andante ma non troppo fourth movement (the third is only a few bars long), Beethoven becomes more reflective as each instrument works around a little catchy tune. In the middle, the cello plays a seven-note fugue subject, followed by teasing plucked notes that go the rounds in a sing-song melody; the movement ends with the first violin trilling to end on a hopeful theme.

The Presto is lively; the players’ intensity paramount. Each instrument carried its lovely melodies to a breathtaking conclusion with muted strings; here, the Escher’s sound was almost ethereal. The Adagio quasi un poco andante was perfection, though I’d differ at their interpretation of the tempo in this penultimate movement.

The final Allegro had all four players giving of their best. The warm sound of the Escher Quartet, originally heard at the start, prevailed to the end as they filled the hall with their lovely music-making.

Film: Playwright August Wilson began his chronicle of the African-American experience throughout the … END_OF_DOCUMENT_TOKEN_TO_BE_REPLACED

Film: Just in time with the opening of movie theaters in Palm Beach County comes the season’s most … END_OF_DOCUMENT_TOKEN_TO_BE_REPLACED

Music: The very last concert Franz Joseph Haydn attended in his life was in March 1808, about a year … END_OF_DOCUMENT_TOKEN_TO_BE_REPLACED