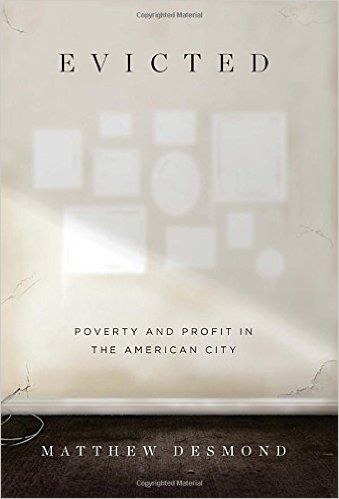 Matthew Desmond was in college when he learned that a bank had taken his boyhood home, forcing his parents to move. “I remember being deeply sad and embarrassed,” he writes.

He began building houses with Habitat for Humanity, while studying poverty and visiting homeless people. In 2008 he moved into a trailer park in a poor Milwaukee neighborhood to learn more about landlords, tenants, evictions and extreme poverty.

Milwaukee landlords evict about 16,000 adults and children each year, most often for non-payment of rent.

Black women are disproportionately affected. One in five women of color in Milwaukee has been evicted at least once, compared with one in 12 Hispanic women and one in 15 white women. Evicted tenants often end up homeless, and some commit suicide.

Between 2009 and 2011, nearly half of all renters in Milwaukee reported housing problems such as broken windows, faulty appliances and rats or mice. Some dealt with clogged plumbing or lack of heat.

Desmond embedded himself with families. “I sat beside tenants at eviction court, helped them move, followed them into shelters and abandoned houses, watched their children, fought with them, and slept at their houses.”

The author does not demonize landlords. Rather, he presents a balanced account, citing the many frustrations they face. One landlord recalled the time a couple stuffed socks down the sinks and turned the water on before moving out. Some leave behind dead animals and rotting food.

Still, landlords know “there is a lot of money to be made off the poor. The ’hood is good.”

A majority of renters nationwide spend more than half their income on housing. One-third spend 80 percent or more. There is nothing special about Milwaukee, Desmond says. Other major cities confront the same reality.

The relationship between eviction and non-payment of rent is complex. Some tenants owe more than $1,000 but keep their apartments, while others who owe much less are evicted. Men can avoid eviction by painting rooms or otherwise helping their landlords. Some women trade sex for rent.

Desmond, an associate professor of social sciences at Harvard University and co-director of its Justice and Poverty Project, last year won a MacArthur Foundation “Genius” award.

The book argues that decent, affordable housing should be a basic right.

“Fewer and fewer families can afford a roof over their head … For decades we’ve focused mainly on jobs, public assistance, parenting and mass incarceration … We have failed to fully appreciate how deeply housing is implicated in the creation of poverty.”

Federal spending on housing assistance totaled $40.4 billion in 2008, compared with $171 billion in tax benefits for homeowners. Desmond argues that the system is skewed to help the middle- and upper-income classes.

Desmond cites Great Britain and the Netherlands as countries that provide comprehensive housing assistance. He contends that homelessness would “almost disappear” if the government offered housing vouchers to every family below a certain income level. That rosy assessment sounds much like previous “solutions” that failed to reduce homelessness.

The author says he is often asked how he handled his research. “The honest answer is that the work was heartbreaking and left me depressed for years.”

Reading story after story of extreme poverty and evictions can numb the mind. The stories begin to sound repetitious.

Nevertheless, Desmond deserves credit for the depth and intimacy of his reporting on a topic that most people give little thought.

Evicted: Poverty and Profit in the American City, by Matthew Desmond; Crown, 418 pp., $28

Film: Playwright August Wilson began his chronicle of the African-American experience throughout the … END_OF_DOCUMENT_TOKEN_TO_BE_REPLACED

Film: Just in time with the opening of movie theaters in Palm Beach County comes the season’s most … END_OF_DOCUMENT_TOKEN_TO_BE_REPLACED

Music: The very last concert Franz Joseph Haydn attended in his life was in March 1808, about a year … END_OF_DOCUMENT_TOKEN_TO_BE_REPLACED