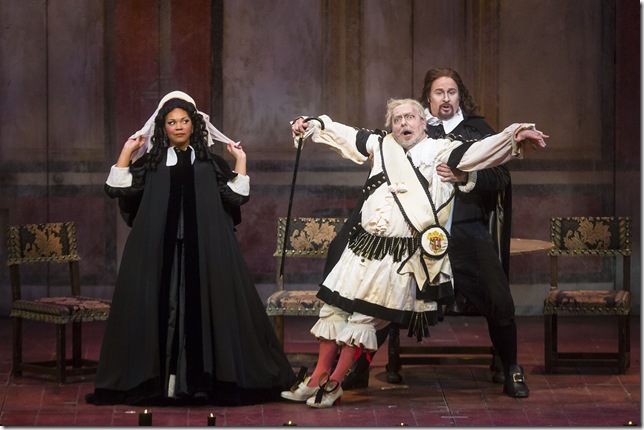 Palm Beach Opera’s second mainstage production of the season, Gaetano Donizetti’s Don Pasquale, showcased in deeply satisfying fashion the improvement in vocal casting this company has demonstrated in the past couple years.

In a charming, smart production reset in the 17th century and borrowed from Glimmerglass Opera, Palm Beach Opera gave Donizetti’s 1843 comic romp everything it needed, from stellar singing to clever staging that was beautifully accompanied and conducted. For sheer overall excellence, indeed, it’s hard to see how it could have been much better.

In the title role, the Italian bass Carlo Lepore was the embodiment of this character. Never overdoing it, he was completely believable as an older man who finds himself not nearly as in charge as the thought he was, and someone who learns something painful about his viability as a romantic object. His strong, dark, bounteous voice was as deftly deployed in comic as well as sentimental moments. He was an absolute delight throughout, and Palm Beach Opera scored a real win in securing him for this, his company debut.

The Chicago-born soprano Janai Brugger, making her debut in this role, was a wonderful Norina. From her first notes (“Quel guardo il cavaliere”), Sunday’s audience at the Kravis Center could hear a big, rich warm instrument that had presence and weight. Her bel canto flourishes sounded easy and effortless, a natural expression of the character, and more dazzling because of that: There was no sense here of the Olympics competition that sometimes afflicts operas of this genre.

She was a good actress, persuasive as a domestic tyrant and winning as a lover; her duet with Ernesto (“Tornamir a dir”) was sung in remarkably smooth hand-in-glove style in which the two voices never left each other’s figurative side. It may be that as Brugger sings this role more often she will become less spontaneous; it’s a hazard of the business. So Palm Beach Opera’s audiences were fortunate to be able to see her give this fresh, unaffected performance. 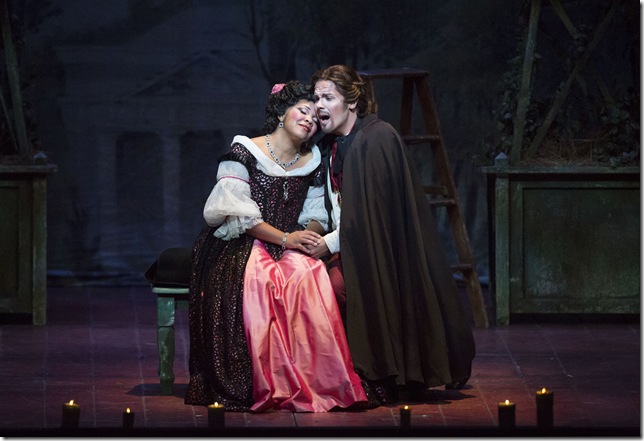 The American tenor David Portillo was an excellent Ernesto, with an ardent, almost-tragic sound to his voice that worked well to bring out the intensity of the character. He was particularly fine in his Act II aria “Cercheró lontana terra” and in the Act III serenade “Comè gentil,” where in both cases the keening, sensual coloring of his voice could be heard at its most forceful. And in the final duet with Norina, the voice gained even more warmth as the lovers’ thirds entwined.

The American baritone Lucas Meachem was a first-rate Doctor Malatesta, a role that in some ways is the most demanding of the four: It requires vocal athleticism that spares no quarter, and a busy acting load as a man heavily involved in both sides of the comedy. His well-rounded, firm voice has enviable agility, and he was a fine actor, clearly enjoying his time on the stage and making the most of good set pieces like the “Cheti, cheti immantinente” duet with Pasquale, in which Meachem and Lepore dashed off their Italian patter passages with real sparkle.

Robert Watson, a troupe Young Artist, was suitably harried in the minor role of the notary — normally a bass role, but here sung as a tenor — and the Palm Beach Opera Chorus was crisp and delightful in its work as the baffled household servants, singing with authority and power.

The production, designed by Allen Moyer and set in the early 17th century in order to draw on the link with the comedy’s comedia dell’arte antecedents, is gorgeous, with candles at the bottom of the stage like the theaters of the time, extravagantly lovely costumes, and a muted lighting scheme that gave the whole production a feeling of intimacy and fantasy that expertly lured its audience in. Stage director Fenlon Lamb made the most of it, giving one of the mute characters, a kitchen domestic, puppet-style movements that added another layer of commentary to the proceedings.

Lamb is good at using the whole stage; her singing actors are kept busy and use their surroundings realistically, and in the choral scene with its multiple windows through which the chorus could be seen singing and waving, showed that she is a director who has given thorough attention to every aspect of the production’s movement. 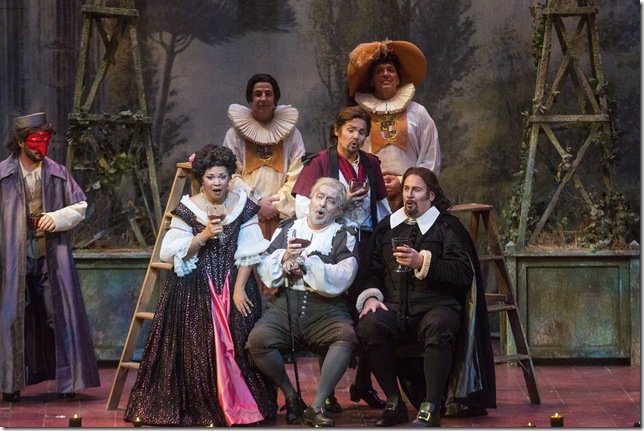 Perhaps the most remarkable aspect of this Don Pasquale was the orchestra under the leadership of Italian conductor Antonino Fogliani. Rarely has so idiomatic and flawless a performance been heard in the Kravis pit, and this is an orchestra that is one of the most reliable pillars of this opera company. Fogliani drew from the orchestra a Donizetti that was absolutely faithful to the composer’s language, in particular in the way he resisted the temptation to punch up the music with extra accents to drive the comedy home.

Here instead was a natural Donizetti, warm and flowing, without the forcefulness of Verdi or the languor of Bellini, but instead a thoroughly balanced music, brilliant but gentle, romantic but chaste, and all of it suave and engaging. Fogliani kept the orchestra in expert support of his singers, never once overshadowing them or leaving them in the musical lurch.

The four voices in the chief roles here were a mix of veterans and rising stars, and they were cannily cast. This is a company that is doing a fine job these days of choosing the right kinds of voices for its productions, a welcome change from the recent past, in which a star voice might be backed up by ones that were markedly less good. But the emphasis now is on making sure all the voices in these productions are as good as can be had, and doing so made this Don Pasquale one of the best afternoons at the opera this company has presented.

Film: Playwright August Wilson began his chronicle of the African-American experience throughout the … END_OF_DOCUMENT_TOKEN_TO_BE_REPLACED

Film: Just in time with the opening of movie theaters in Palm Beach County comes the season’s most … END_OF_DOCUMENT_TOKEN_TO_BE_REPLACED

Music: The very last concert Franz Joseph Haydn attended in his life was in March 1808, about a year … END_OF_DOCUMENT_TOKEN_TO_BE_REPLACED