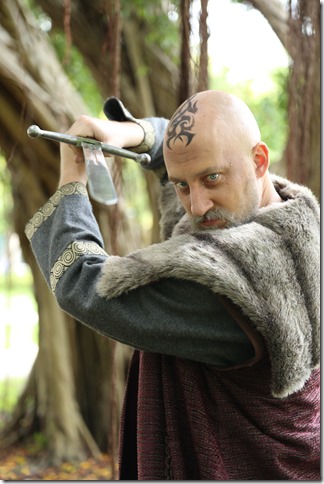 Student actors from the Department of Theatre and Dance at Florida Atlantic University wrap up their 2015-2016 performance season this weekend with performances of what many consider to be William Shakespeare’s greatest play, King Lear. The show opened last week to a sellout crowd at the Studio One Theater on the Boca Raton campus.

Based on a Celtic folk tale, the play frankly and bluntly depicts the title character’s descent into madness after disposing of his kingdom through bequests to his two elder daughters who, in the end, turn on him. His youngest daughter, the one he ignores after disdaining her pronouncement of love for him, turns out to be only one who actually cares for the aging monarch.

The production is populated with a variety of gentlemen, servants, officers, messengers, soldiers and attendants along with one fool, one bastard and an ensemble of unspecified folks. The play is not set in an opulent castle, but rather, in what appears to be a moor that spreads back along a smoothly hewn wall with doorways that allow well-timed entrances and exits. The actors wear furs, tunics and what appear to be dresses made of leather, as if they are accustomed to outdoor living.

Clearly, performers and production crew have done plenty of research and preparation for the season finale. The actors speak in a dialect based on early Modern English. Accent Coach Kathryn Johnson said the FAU performers made some adjustments to the lines so they would be more intelligible to a 21st-century audience. Jordon Armstrong, who portrays Cornwall, assisted other cast members with the lines, as did Paul Meier Dialect Services.

King Lear is a very detailed play, but the plot is fairly easy to follow. The monarch, played with passion and often with intense anger by Ross Frawley, gives two pieces of his kingdom to his elder daughters Gonerill (Shannon Ouellette) and Regan (Brianna Handy), who earn it by doing some serious sucking up during their assertion of love for him – which they secretly declare as false flattery. Youngest daughter Cordelia (Samantha Kaufman) says there is nothing to compare her love for her father to, nor words to properly express it. This infuriates the old king, who doesn’t seem to believe she is actually being the most honest of the three children. And in his rage, he disinherits her and divides her share of property between Regan and Gonerill.

Their husbands, the Duke of Albany (AJ Taylor) and the Duke of Cornwall (Armstrong), look to hang onto their piece of the action. Kent (Connor Padilla) objects to Cordelia’s treatment, so the king banishes him. Once the dust settles, the King of France (Bradley Wells) steps up and marries Cordelia.

Suffice it to say that King Lear is filled with lots of distrust, mistrust, maltreatment, fits of temper, stage combat, sword fights and angry letters written on fairly real-looking parchment. 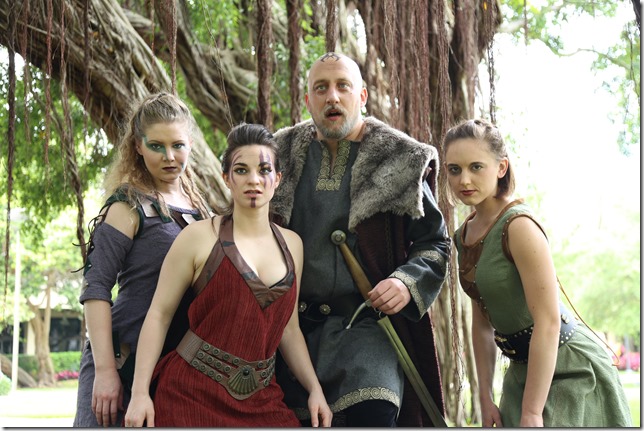 Or, as Director Lynn McNutt says, “As a piece of literature, the text flies off the page and into our souls with poetic images, large thoughts and primal feelings. When reading, our imaginations are able to focus on the great tragedy of it all: heartbreaking betrayals, crippling ingratitude, fierce loyalty, trying tempests and the brutal images of violence and pain.”

The aforementioned Ross Frawley breathes true misery into Lear’s life, and the finale, where he holds Cordelia’s lifeless body, is exceptionally moving.

Ouellette, Handy and Kaufman are also outstanding as the three daughters. Wetzel, who has portrayed a variety of excellent characters at Studio One, still manages to quip even though forced into blindness. Anarumo, as Edgar, also shows courage under fire and Adams, portraying the bastard son, is a perfect weasel in that role.

Padilla portrays Kent as outspoken and just. And Abby Nigro is sweetly crazed as Lear’s fool. It’s so touching how she continually calls him “n’uncle,” an offhanded term of endearment.

Film: Playwright August Wilson began his chronicle of the African-American experience throughout the … END_OF_DOCUMENT_TOKEN_TO_BE_REPLACED

Film: Just in time with the opening of movie theaters in Palm Beach County comes the season’s most … END_OF_DOCUMENT_TOKEN_TO_BE_REPLACED

Music: The very last concert Franz Joseph Haydn attended in his life was in March 1808, about a year … END_OF_DOCUMENT_TOKEN_TO_BE_REPLACED