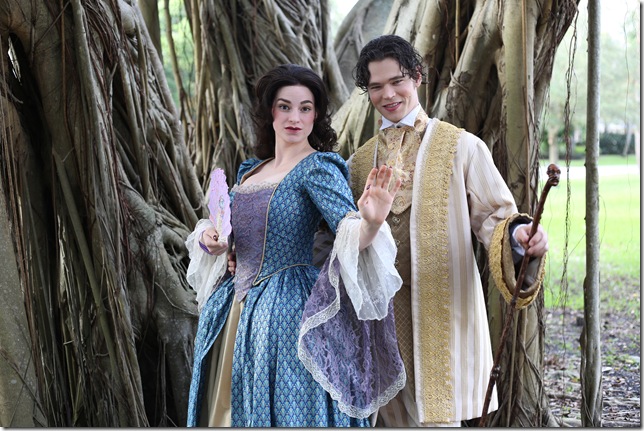 Oh, you rascally Restorationists. You aristocratic, anti-Puritan tricksters of late 17th-century England. You sure know how to show a lady a good time — sexually, that is — even if it’s at the expense of their unsuspecting, seemingly dimwitted husbands.

That’s essentially the plot of William Wycherley’s 1675 play, The Country Wife, now being presented by students in the Department of Theatre and Dance at Florida Atlantic University. The production is drawing everything from titters to outright guffaws from a modern-day audience that quickly catches on to the author’s catchy double-entendres, lascivious verbiage and fast-paced entanglements — even though the behaviors and dialogue are 350 years old.

The show that brings a cast of 16 talented young men and women garbed in elegant period dress to the Studio One Theatre on the Boca Raton campus concludes this weekend.

Had Wycherley written The Country Wife today, it would undoubtedly have ended up on Broadway, been made into a movie and then become a musical. Though the playwright had neither money nor title, he gained favor with the aristocracy — and with King Charles II himself — with this sexually oriented production, a play greeted as one of the bawdiest and wittiest ever to hit the English stage.

Time, and evolution of the English language, have taken some of the bite out of the lines. But the FAU players — who deliver the early modern English sentences with near perfection — add wild gestures, antic facial expressions and other body language devices to help deliver the message. And the message gets across quite well.

The play focuses on Harry Horner (Jordon Armstrong), a libertine with a voracious sexual appetite who’d love to bed as many ladies as he can — married ones, of course. With help from his doctor friend (called “The Quack” and portrayed by Joey De La Rua), he spreads the word that Horner is impotent so he can safely have clandestine affairs with London’s wives under the unsuspecting noses of their husbands.

Harry’s wife bedding delights most of the female cast, among them, Margery Pinchwife (Kimberlee Connor), who tries to fend off her troublesome husband, Jack (Ross Frawley). While he keeps her under tight scrutiny, he doesn’t seem to mind her meanderings with Harry.

(By the way, Connor is the inexperienced “country wife” of the play’s title. Her naiveté quickly and delightfully disappears when Horner introduces her to the joys of the flesh.)

Others who flock to the flesh fest include Mrs. Squeamish (Emily Freeman), Lady Squeamish (Connie Pezet), Lady Fidget (Shannon Ouellette) and Dainty Fidget (Nicole Pellini). Lucy (Madison Spear) isn’t part of this cavalcade and, in the end, turns out to be the voice of reason who helps settle the intertwined relations.

Connor Padilla, a familiar performer in FAU productions, portrays Mr. Harcourt, one of the purer men in the play. He courts Alithea Pinchwife, Jack’s sister (Samantha Kaufman). Using persistence and expressing his true love, he finally wins her hand, taking her away from her shallow fop of a fiancé, Mr. Sparkish (Clifton J. Adams).

Most of Horner’s amorous scenes are hidden behind closed doors. But the so-called “virtuous gang” segment is more like a gang bang, with ladies placing themselves suggestively across his reclining body.

There’s also the “china scene,” a sustained double-entendre in which Horner is purportedly discussing his “china collection” with two of his lady friends who are obviously admiring his “equipment.” A couple of other characters are listening outside the closed door, nodding in approval at the display of “china,” but failing to pick up the double meaning that is obvious to the audience.

The Country Wife is a particularly energetic show, with actors running around the stage and entering and exiting via aisles in the audience. The set is particularly intriguing. All the doors, buildings, etc. look like Sharpie drawings on a white background. On-stage props are scarce — only a table, two chairs and a lounge.

Costuming is exquisite, the work of costume designer Larry Bauman with help from Kimberlee Connor, Emily Freeman and Brianna Handy. Through it all, director Jean-Louis Baldet manages to keep the “controlled chaos” in check.

Film: Playwright August Wilson began his chronicle of the African-American experience throughout the … END_OF_DOCUMENT_TOKEN_TO_BE_REPLACED

Film: Just in time with the opening of movie theaters in Palm Beach County comes the season’s most … END_OF_DOCUMENT_TOKEN_TO_BE_REPLACED

Music: The very last concert Franz Joseph Haydn attended in his life was in March 1808, about a year … END_OF_DOCUMENT_TOKEN_TO_BE_REPLACED