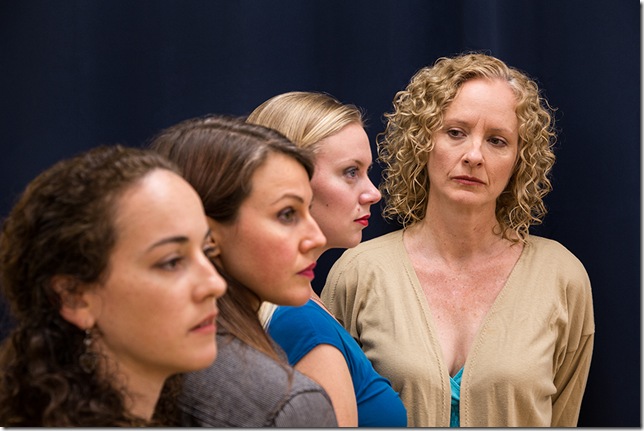 It took no small act of courage for Florida Atlantic University’s Department of Theatre and Dance to kick off Festival Rep 2014 with the attention-demanding black comedy, August: Osage County. It’s also courageous for university dramatists to present the Tracy Letts play so soon after the 2013 release of the film version that starred Meryl Streep and Julia Roberts and was seriously eyed for a Best Picture Oscar.

The FAU cast combines courage with grit, raw talent and determination in this superb, riveting production that plays through July in Studio One, the first-floor stage at the University Theater on the Boca Raton campus. Summer Rep at FAU allows drama students to work with Equity actors to hone their stage abilities.

To say the standing ovation at the end of the three-act, 3½-hour show was well deserved is an understatement. Many in the audience seemed more spent as they exited than the performers, who were as sharp at 10:30 p.m. as they were at 7. The play, which won a Pulitzer Prize and Tony Award in 2008, “sets a new standard for American drama with its biting wit, uninhibited, in-your-face characters and painfully honest family situations,” said director Jean-Louis Baldet.

August: Osage County focuses on what Baldet calls the “tortured reality” of the Westons, a dysfunctional family in Oklahoma. Beverly Weston (David Meldman) is a former poet and teacher whose literary life is reduced to one large bookshelf. He has a penchant for T.S. Eliot, a reference that will be revisited several times. He and wife Violet (Kim Ostrenko, an Equity actress) have bad habits. “She takes pills, and I drink,” he tells Johnna (Amanda Otero-Romano), a Native American housekeeper he hires to care for his wife, who has mouth cancer.

Early in the play, problems erupt between the couple. Soon, Beverly disappears, and the possibility that something untoward happened is cause for the family to gather at the old homestead and search for him. When they learn he has committed suicide, it ignites more arguments, rancor, yelling and foul language than it does grief. It also sets the stage for a rematch of clashes between Violet and her eldest daughter, Barbara (Elizabeth Price), as well as some pretty serious squabbling among the three sisters.

A series of conflicts ensues during the next several days as Violet and Barbara continue to argue and fight. The family disapproves of Karen Weston (Jenna Wyatt) bringing her fiancé Steven (J. Connor Hammond) to the funeral, and third sister Ivy (Connie Pezet-Truesdale) secretly plans to run away with an unnamed lover. Violet’s sister Mattie-Fay (Sujotta Pace) is constantly picking on her son, Little Charlie, despite an obvious mental problem. Her disrespect of their son upsets husband Charlie (Wayne LeGette, also an Equity actor) something fierce.

The post-funeral dinner is perhaps the most bizarrely comical in the play, even outdoing the exploding turkey scene in National Lampoon’s Christmas Vacation. With their world falling apart, most family members beat a hasty retreat. What happens to Violet in the end is, well, a question perhaps best answered by T.S. Eliot.

Osage County is a gripping play that elicits tears, laughter and, most often, shock. As Violet, Ostrenko gives her all to the role, and there is delightful, albeit, “bad,” chemistry between her and Barbara that makes for wonderful drama. As the eldest daughter, Price is priceless, screaming, gesticulating and taking command with such authority that General Patton would shiver. Her performance is worth its weight in flying catfish.

As the other sisters, Pezet-Truesdale’s Ivy is Barbara’s polar opposite, submissive, introspective and secretive to a fault, with a stage presence that is quiet but unmistakable. Wyatt infuses her character, Karen, with a ditzy, overly talkative quality that shows a third side of the Weston triad.

Jack Kelly portrays Little Charlie with a warmth and understanding of a grown-up special needs child. The actor deserves note for that. And Nicole Pellini, as Barbara’s 14-year-old daughter, Jean, makes it clear she knows more than she’s telling.

LeGette plays Charlie as a pretty regular guy, but he comes out of that compliant shell for a wonderful moment when he blasts his wife for failing to respect their son in one of the best monologues in the play.

August: Osage County plays through July 26. Weekend shows alternate with Bonnie and Clyde, the Musical, which opens Saturday and runs through July 27. Summer Rep ends with a piano gala Aug. 1 and big band concerts Aug. 2 and 3. For a performance schedule and tickets, visit fau.edu/festivalrep/ or call 561-564-9539.

Film: Playwright August Wilson began his chronicle of the African-American experience throughout the … END_OF_DOCUMENT_TOKEN_TO_BE_REPLACED

Film: Just in time with the opening of movie theaters in Palm Beach County comes the season’s most … END_OF_DOCUMENT_TOKEN_TO_BE_REPLACED

Music: The very last concert Franz Joseph Haydn attended in his life was in March 1808, about a year … END_OF_DOCUMENT_TOKEN_TO_BE_REPLACED