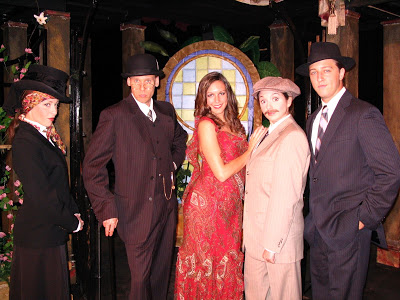 Florida Atlantic University’s 12th annual summer Festival Rep has romance on the brain this season, leading off with William Shakespeare’s comedy of gender confusion, mistaken identity and the resilience of love, Twelfth Night.

On now in a production that is uneven at best, it will be joined at the end of this week by Stephen Sondheim’s 1970 musical Company, a jaundiced view of contemporary relationships, which will play in rotating repertory at the Boca Raton campus’s University Theatre through July 26.

Shakespeare subtitled Twelfth Night “What You Will,” which has long been interpreted as blanket permission to directors to take whimsical liberties with the play’s setting. According to the production’s press release, the show is set “in Hollywood, California, in the 1920s movie era.” That may have been director Jean-Louis Baldet’s original impulse, but there is little evidence of the notion in what is ultimately onstage.

If you pushed the point, you might see a resemblance between low comic characters Sir Toby Belch (Sam Sherburne) and Sir Andrew Aguecheek (Jay Reese) to W.C. Fields and Harold Lloyd, but the actors do nothing to press the idea, which is tenuous at best.

One of FAU’s more talented recent graduates, Rebecca Simon (who played the title role in last summer’s Evita), is cast as the traditionally male clown Feste — here renamed Festa — and she glides through the evening proving that “music is the food of love,“ trilling standards from the American songbook such as My Blue Heaven, I’ve Got a Crush on You and My Funny Valentine, most but not all from the designated era.

Anyway, Twelfth Night is one of the Bard’s shipwreck comedies, a premise that leaves twins Viola and Sebastian separated in an alien land and soon mistaken for each other when Viola tries to pass herself off as a guy. Yes, it’s a stretch, but go along with it anyway.

The Rep’s purpose is ostensibly to showcase the training of the school’s theater department, but wrestling with Shakespearean verse and rendering its meaning is not a skill that most of the cast seems to have. Fortunately, an exception is Alexa Cappiello (Viola), who carries the production by reciting her dialogue with conversational tones while also retaining the poetry.

Also an asset is Equity guest artist Bruce Linser as Malvolio, the dour and self-important aide to Countess Olivia, whose unexpected romantic feelings makes him an easy target of cruel jokes. Linser’s button-down wardrobe and manner are a nice comic contrast with the silly getup he is tricked into wearing in his pursuit of love.

The multi-level set by Terry Lawrence is attractively dressed with colorful plants and flowers, but is used so little it probably was designed more with Company in mind. Twelfth Night is one of the less problematic of Shakespeare’s plays to produce, but as FAU reminds us, it is not foolproof.

Film: Playwright August Wilson began his chronicle of the African-American experience throughout the … END_OF_DOCUMENT_TOKEN_TO_BE_REPLACED

Film: Just in time with the opening of movie theaters in Palm Beach County comes the season’s most … END_OF_DOCUMENT_TOKEN_TO_BE_REPLACED

Music: The very last concert Franz Joseph Haydn attended in his life was in March 1808, about a year … END_OF_DOCUMENT_TOKEN_TO_BE_REPLACED