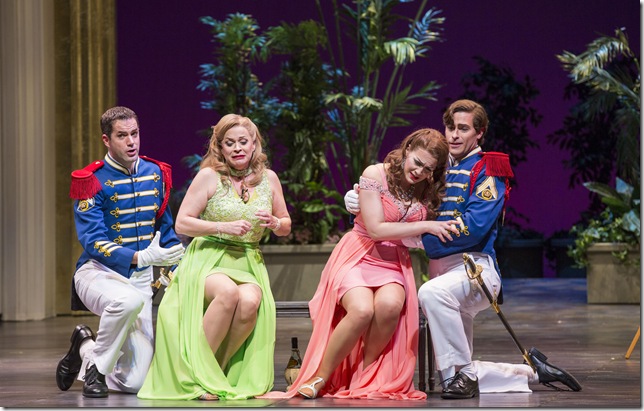 For as many problems of interpretation that Mozart’s Così fan Tutte presents to its observers, there are at least as many options that this singular opera gives to its presenters.

Given that its specific locale of Naples isn’t underlined in Lorenzo Da Ponte’s libretto, directors have felt free to reorient it everywhere else and every other time, and it rarely detracts from the composer’s work. Mozart’s music clothes this cynical story in all the positive elements of humanity that are otherwise missing from it, and that brings us closer to an understanding of what kind of artist he was.

Florida Grand Opera’s 74th season continued Saturday night at the Ziff Ballet Opera House in Miami with Così, the third and last of Mozart’s Da Ponte collaborations. It premiered exactly 225 years ago Monday in Vienna’s Burgtheater, and while it had a checkered performance history until the early 20th century, it has long since been a standard repertory piece.

It’s essentially a six-person chamber opera, and FGO has assembled a fine cast for it in its own production, led by the veteran French director Bernard Uzan. He has reset the story in “modern-day Monte Carlo,” but it looks for the most part to have settled somewhere in the 1930s, with the visual style of an Agatha Christie play or a Gershwin musical.

The set is a big open room that serves multiple duties for the various scenes, and its simplicity is brought into sharp relief by the beautiful, boldly colored costumes of Howard Tsvi Kaplan. They center all the attention on the singers, and that’s where it belongs in a work like this.

The all-American cast had plenty of acting to do, and went after it with gusto, playing broadly without descending into vaudeville or slapstick. Uzan kept the action moving — though a musical decision or two threatened to slow it down too much — and the interest high throughout the 3-hour evening. 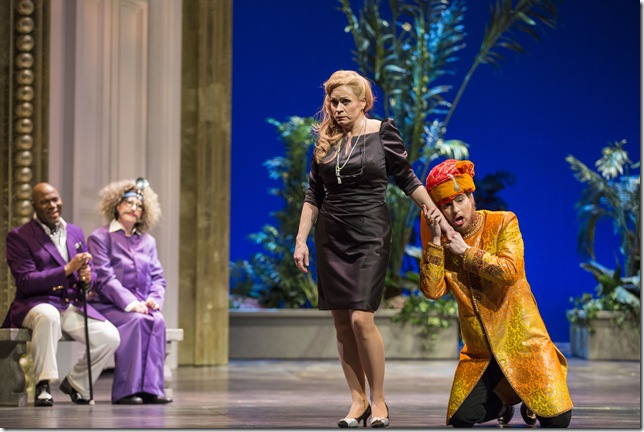 Soprano Sari Gruber was Fiordiligi, and she brought to the role a good, strong voice and decent acting; she was believable as a woman trying to remain true to herself and learning something else in the process. Her big aria in Act I, “Come scoglio,” was firm but not fiery, and would have benefited by a more emphatic approach.

Her big Act II moment, “Per pietà, ben mio,” which is just as perilous as the better-known Act I aria, was hampered in the pit by conductor Ramón Tebar, who took the slow sections of the aria at a monumentally slow pace, which seemed to interfere with Gruber’s breath control, and also threw the aria out of whack. It didn’t hang together at that tempo, and it stopped the action of the opera dead. 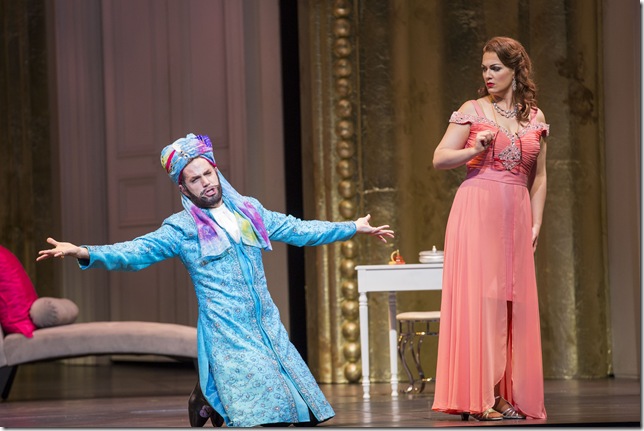 Gruber’s voice sounded lovely with that of her stage sister, Brenda Patterson, a pleasingly dark-voiced mezzo who sang the role of Dorabella. The sister who strays first gets to have a little more fun on stage, and Patterson’s “È amore un ladroncello” showed her to good effect as a singer with a knack for sassy delivery.

Baritone Jonathan Beyer was a very fine Guglielmo, with real comedic acting chops and an impressive, smoothly rounded voice that was especially effective in one of the night’s best moments, the Act II duet “Il core vi dono” with Dorabella. This was sensitively staged on a downstage bench with Beyer and Patterson gently touching each other’s chests in an embrace of discovery that melded wonderfully with the surpassingly tender music underneath.

As Ferrando, tenor Jason Slayden displayed an engagingly reedy tone color, but he ran into vocal trouble early on, and sounded strained and slightly flat at times when he needed to unleash his biggest guns. But he made a good partner for Beyer, and his acting was persuasive, especially in the “Fra gli amplessi” duet with Gruber, which like the earlier Guglielmo-Dorabella duet was staged with believable ardor. 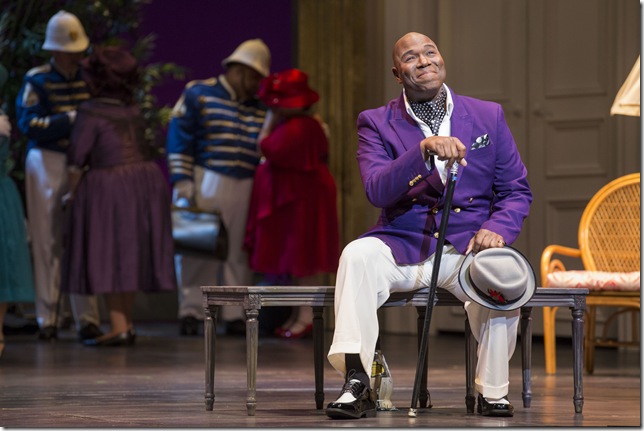 Bass Arthur Woodley was an excellent Don Alfonso, with a sonorous instrument and a good stage presence. He did a lot of smart acting with his facial gestures, which is fortunate given the exigencies of this staging, in which he sported a cane to explain his relatively static movement vocabulary.

Ava Pine, as Despina, won by far the warmest audience reception, not least because this part is the most fun of the six, but because she was so good at it: She was having a ball performing the part and it came across. Pine has a lightly colored, nimble soprano and has no qualms about taking command of the stage when it’s her time, and she left a delightful, mischievous impression; her “Una donna a quindici anni” sparkled.

The chorus, well-led by Brett Karlin, sounded firm and vigorous in its brief appearances, and did a good job with some runaway Tebar tempi, such as in the blisteringly fast military march. Tebar makes much of finding something in every score to leave a personal imprint on, and this Così was no exception. The tectonic-plates “Per pietà” was one example, and so was his decision in the overture to play the “Così fan tutte” motif at the speed of the Presto that immediately follows it, which makes little sense. 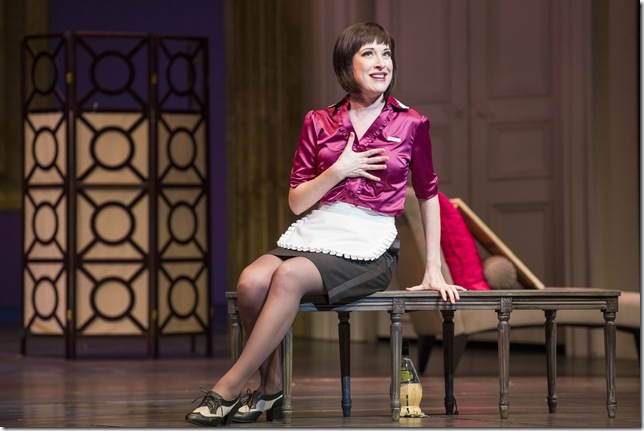 His speedy-baton approach had some ensemble costs, particularly at the end of the scene with Despina and Don Alfonso introducing the women and the foreigners (incorrectly misidentified as “Walloons” in the supertitles; Despina thinks they might be “Wallachians,” from a territory that’s now part of Romania). Tebar led the final tag of the scene much faster than Pine or Woodley expected, and they had to rush things in order to end together.

All this might seem unnecessarily picky, but my concern here is that in his quest to make the music his own Tebar innovates unsuccessfully. What we get is confusion rather than some insight, and in particular his odd tempo approaches led to several instances of hit-or-miss unity.

I’m all for trying something new and fresh with every score, no matter how hallowed. But the new things have to work, rather than sounding random or willful.

Still, his orchestra played beautifully for him, and there were many moments of sheer Mozartean magnificence when everything gelled. 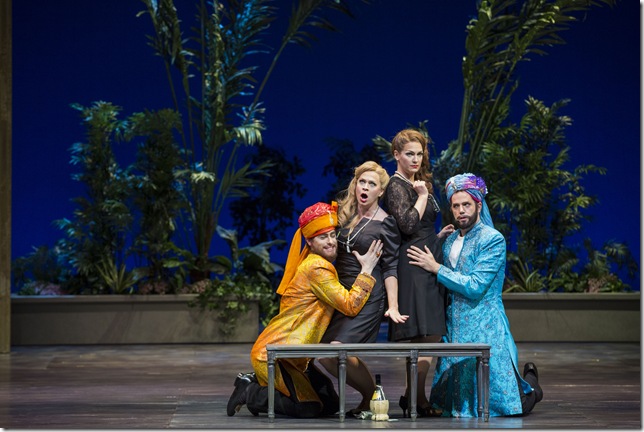 In addition to the great tenderness he called for in the scenes when the two women fall for their mysterious suitors, Uzan also went to the coarser side of things: Ferrando gropes Fiordiligi’s breasts several times when they first get close, and Guglielmo, in a sly gesture when explaining his virtues to the women, points the way to his nether regions.

It was funny-smutty rather than over-the-top vulgar, and it fit in well with the louche atmosphere of the hotel. Uzan also does not reunite the original couples at the end, but has them instead pair off with their new lovers; i.e., Guglielmo with Dorabella and Ferrando with Fiordiligi, which has always made much more sense to me than restoring the pre-wager duos or leaving everyone unsure which way to go.

In the absence of any specificity in the libretto, Uzan is surely right to feel that these four people have been through something profound and life-changing, mean-spirited as the original bet might have been, and that not only is there no going back, the couples have had the opportunity to make new choices, and have made them.

Così fan Tutte can be seen again Tuesday, Friday and Saturday at the Ziff Ballet Opera House, Miami (all performances at 8 p.m.), and on Feb. 12 and 14 at the Broward Center for the Arts in Fort Lauderdale (performances at 7:30 p.m.) On Friday and Feb. 14, Fiordiligi will be sung by Hailey Clark, Dorabella by Carla Jablonski, Ferrando by Daniel Bates, Guglielmo by Isaac Bray, and Despina by Rebecca Henriques. Tickets start at $12 at the Arsht Center and $21 at the Broward Center. Call 800-741-1010 or visit www.fgo.org for more information.

Film: Just in time with the opening of movie theaters in Palm Beach County comes the season’s most … END_OF_DOCUMENT_TOKEN_TO_BE_REPLACED

Music: The very last concert Franz Joseph Haydn attended in his life was in March 1808, about a year … END_OF_DOCUMENT_TOKEN_TO_BE_REPLACED