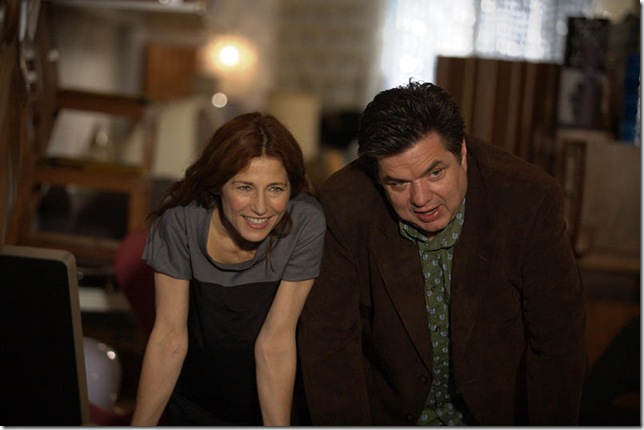 There’s Martin Scorsese and Robert De Niro. There’s Tim Burton and Johnny Depp. And on the female side, there’s Nicole Holofcener and Catherine Keener: Film directors and the actors with whom they frequently collaborate.

Keener has been in all four of Holofcener’s films — Walking and Talking (1996), Lovely and Amazing (2001), Friends with Money (2006) and her latest, Please Give, which opened over the weekend. In March, during the Miami International Film Festival, the two women sat down with Hap Erstein to talk about the film and their long-running collaboration.

Erstein: How did this collaboration begin for you two?

Holofcener: I saw her in a movie and I kind of stalked her, found her agent and gave her my script. She responded to it, we hit it off right away, but it took many years to get the financing. Then when we made the film, we became friends. I never planned to put her in all my movies, but I just couldn’t not.

Erstein: So as you gather material for the next movie, do you now think, “How can I make this a Catherine Keener character?”

Holofcener: Actually, if it’s a character that‘s somewhat based on me, I generally think of Catherine, because she’s definitely played me, as much as a person can play me in a movie. But I don’t start out that way. I definitely go with thoughts and themes that are important to me and then see who fits.

Erstein: Catherine, when you first read her script for Walking and Talking, you didn’t know her at all, did you?

Keener: Nope. But I was drawn to the writing and it made me think: I would love to hang out with this woman.

Erstein: So you certainly did not think this would become a long-term collaboration.

Keener: No, she didn’t have the movie financed or anything. She just said, “I want to make this and I want you to be in it if it happens.” And it wasn’t until a couple of years later that it happened. And it was quite a struggle to get me, to convince investors to go with me.

Erstein: What makes Catherine an ideal actress for your films?

Holofcener: It’s a really hard thing to describe, but, first and foremost, she’s really natural. She doesn’t have a movie voice, or a movie face, nothing’s fake. Of course she has good takes and bad takes like everybody else, but generally she is really natural, no mannerisms. She really listens, to me and to the other actors. She’s very present, she’s got a great sense of timing and humor, which is really imperative, because the material can be so serious and self-involved and self-conscious, but if the actor has a sense of humor, it gives it so much more.

Erstein: Do you think of her as a muse?

Holofcener: Yeah, sure, absolutely. I mean when I’m writing something and I hope that she’s going to be playing it, I think it helps make me a better writer, when I think about how she would say it.

Keener: And she is a muse for me as well, because when I’m reading (a script of hers) and I’m working for her, it just takes me to more creative places in my head.

Erstein: Do you feel more proprietary about making a film of Nicole’s, that you are more than just a hired hand in a movie?

Keener: No. I don’t feel any ownership at all. I’m still just her minion. (Laughs)

Holofcener: She still absolutely looks for my approval. She wants to make sure she’s doing it the way I want her to do it. She could have a lot more freedom than she takes.

Keener: I’m not interested in that, though. I like it this way. I think actors need directors. I know that I do.

Erstein: Is Catherine playing a role that represents you in Please Give?

Holofcener: That character is definitely the closest to me compared to any of the other characters. I struggle with being a successful person with lots of money compared to everybody else.

Erstein: You don’t feel you deserve it?

Holofcener: It’s a struggle. It’s not that simple. Yes, of course I deserve it. If anybody deserves it, why not me, right? But the way it works is just so crazy and wrong. There are so many starving hungry people everywhere. I live in L.A. and they’re everywhere.

Keener: We live in expensive houses, but we can look outside and see so many people who are poor, disenfranchised.

Erstein: But you chose to set the film in New York, which is almost one of the characters.

Holofcener: I did that because the city was an important part of the story when I first created the characters and the situation. I really couldn’t imagine it anywhere else. I wanted that elevator, I wanted them to have to get in the same elevator, to have their doors right next to each other.

I tried to figure it in my mind in L.A., because I didn’t want to leave my kids, but it just wouldn’t work. It had to be New York. And I grew up in New York and that’s where this part of me came from.

Erstein: That reinforces a comment I’ve often heard, describing you as a female Woody Allen.

Holofcener: Y’know, I think it’s because I’m a New York Jew. Seriously, I think if I wasn’t those two things, you wouldn’t hear those comparisons. But then, I would be a very different person, and maybe I’d make different movies. I mean, if I were Cybill Shepherd, so many things would be different.

Plus I grew up watching and revering his movies. I remember seeing Manhattan and Annie Hall and Stardust Memories so many times, they have to be an influence, consciously or unconsciously. And having such neurotic, but really sympathetic, deep characters in everyday life. They have such problems in Manhattan, and it’s so absorbing.

Erstein: How do you develop a film? Do you collect ideas and characters until you have enough?

Holofcener: Pretty much. I have an idea, and then I think I have an idea for a couple of characters and if it lasts more than a day, I’ll sort of expand on that the next day and then after a few weeks if it still seems interesting to me, I just start writing.

And I don’t really know where it’s going to go when I start writing, but I like to have some idea of maybe the first few pages.

Erstein: The movie opens with shots of women having mammograms. That’s as close as I’ve ever been to seeing the test given.

Holofcener: Well, let me tell you, it’s really a G-rated version of a mammogram. They really flatten the boobs like a pancake. It’s so weird. I really wanted to do that, I wanted to show that it really hurts, but I couldn’t let that happen. In retrospect, I wish I hurt a couple. So you haven’t really seen a mammogram.

Erstein: Were those professional actors?

Holofcener: Those were actual, real boobs. They were extras, and they got paid as extras. I signed a thing that said their heads would not show in the same shot as their boobs. Like we might have used them again later that day on the street. The call for those extras asked for all shapes and sizes, mostly 50 and over.

Erstein: What ties all the characters in Please Give together?

Holofcener: I think that Catherine’s character and Amanda (Peet’s) and Rebecca (Hall’s) character have a similar theme, that they all want to be good and what that means for each of them is different. Because (Amanda and Rebecca) had a mother who abandoned them by killing herself — I think children feel that that’s their fault that there’s something wrong with them — and Catherine’s quandary is more contemporary, it’s more in her life right now, not necessarily a childhood wound. But the fact that they are going to be the people they want to be, sort of let off the hook.

Erstein: On behalf of pudgy men everywhere, I’m so glad that Oliver Platt (Keener’s husband) has an affair with Amanda Peet. But what is her motive?

Holofcener: I think that Amanda Peet’s character instantly envies Catherine’s character and looks up to her. Catherine has whatever Amanda does not have. Husband, children, money. Amanda doesn’t feel beautiful, although she is very beautiful. And I think having Catherine’s husband hit on her is the ultimate compliment. She’s desperate and lonely and insecure.

Erstein: Why do so many of your characters have self-image and assurance issues?

Holofcener: Characters that don’t have them are probably not very interesting. I mean, everybody has self-esteem issues in some areas, don’t they?

Erstein: Talk about the involvement of Sony Classics Pictures.

Holofcener: They financed the movie. They also financed Friends with Money. They didn’t even come to the set. I say, “Aren’t you guys interested?” They said, “We trust you. It’s all right.” And they don’t tell me what to cut or anything. It’s amazing.

The movie only costs $3 million, and it’s not my first film. My last film made them some money, although they were very hands off on the last one, too. I think once they decide to trust you, they just trust. And it wasn’t a great deal of money. I’m very, very lucky. I think I’m in a very rare situation.

Erstein: Do you think of Please Give as a departure for you?

Holofcener: No, a departure for me would be a movie without a joke. Or a thriller. A highly stylized movie, something like that.

Erstein: Is it getting any easier to get your films financed and distributed?

Holofcener: No. But it’s still difficult. A lot of studios tell me they want to make my next movie, but when they see the script, they say, “Maybe not this one. We mean the next next one. The one that‘s going to make a lot of money. The one that I can really see on the page better than this one.”

You know, they want me to make a thriller.

Film: Playwright August Wilson began his chronicle of the African-American experience throughout the … END_OF_DOCUMENT_TOKEN_TO_BE_REPLACED

Film: Just in time with the opening of movie theaters in Palm Beach County comes the season’s most … END_OF_DOCUMENT_TOKEN_TO_BE_REPLACED

Music: The very last concert Franz Joseph Haydn attended in his life was in March 1808, about a year … END_OF_DOCUMENT_TOKEN_TO_BE_REPLACED