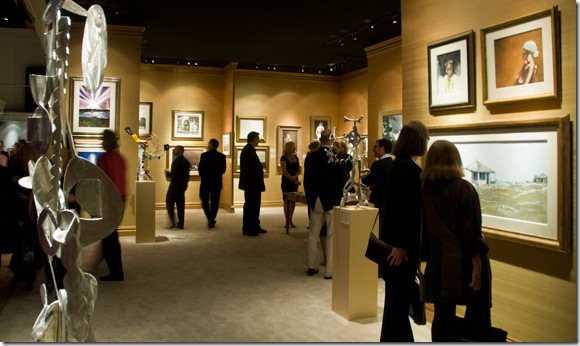 “The 14th edition of AIFAF is shaping up to be the best yet,” he said.

The convention center has been transformed into an array of architecturally interesting rooms in which more than 80 vetted exhibitors from 13 countries are showing off sculpture, paintings, etchings, drawings, suits of armor and rare books, among other things. The fair ends Monday evening.

Kevin Baxter, the fair’s public relations coordinator for the event, said the fair got under way Wednesday with brisk sales. The Richard Green Gallery reported sales of more than $1 million in the first 24 hours, and the Surovek Gallery sold an Andrew Wyeth painting for $750,000, Baxter said.

Also, Lawrence Steigrad Fine Art sold a Bernhard Osterman painting for $225,000, and the 19th-Century Shop sold an edition of Walt Whitman’s Leaves of Grass for $480,000, he said.

One of the opportunities for fair visitors — buyers and gawkers alike — is the chance to see pieces that have been socked away in private collections and galleries. Students of art history can see original drawings in which artists have explored their ideas, view works that were never published, and discover new artists and styles. 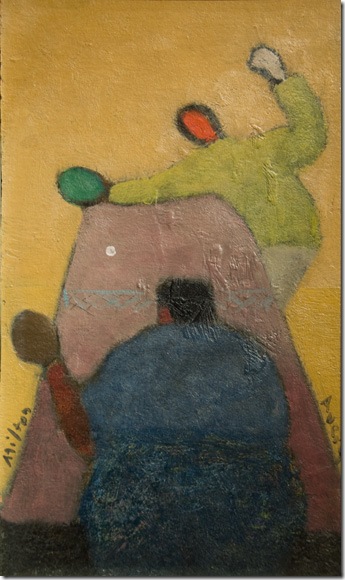 For instance, Ping Pong Players, painted circa 1944 by the American artist Milton Avery (1885-1965), clearly illustrates Avery’s simplification of line and shape. In this piece, Avery departs from his usual passive subjects, deftly depicting an action sequence. The small oil on board can be found at Thomas Colville Fine Art.

Adelson Galleries of New York, specialists in American art, attracted a multitude of visitors to its tastefully appointed booth. Works by Andrew and Jamie Wyeth, as well as South Florida’s own Stephen Scott Young (b. 1957) are on display.

Young’s realist paintings, primarily in watercolor, have rocketed in price, as collectors appreciate not only his technical skill but also his ability to convey the character of his subjects, who are often of African descent. Tropical subject matter and humble architecture are also captured in his paintings and drybrush works. 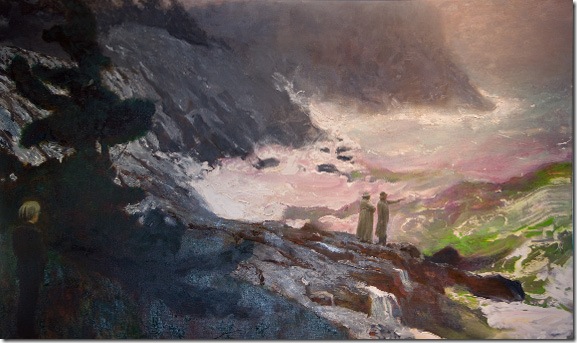 Third-generation painter Jamie Wyeth continues the family tradition of his father Andrew and his grandfather N.C. (also represented by Adelson Galleries), but raises the bar with his experimentation, exploring and courageously combining styles. The Sea, Watched is a recent 30-by-48-inch oil on canvas by Jamie. Adelson Galleries director Elizabeth Oustinoff said that the painting was created just after the death of Andrew Wyeth, who is represented at the shore with his father, N.C. In the foreground, Andy Warhol is pictured from the back, looking onto the scene.

“Jamie painted this in memory of the three people who were most influential in his life,” Oustinoff said. 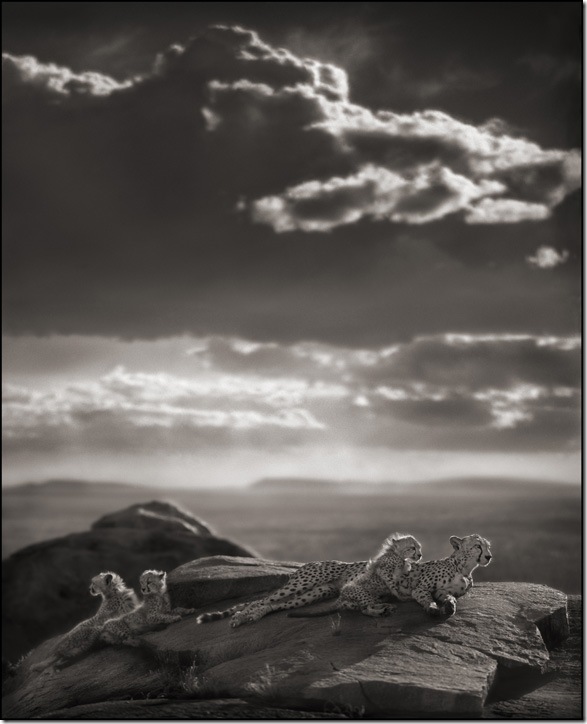 In the Holden Luntz exhibit at the far northeast corner of the fair, large, dramatically printed images by British photographer Nick Brandt stop visitors in their tracks. Brandt’s visions of Africa feature intimate photos of African animals, captured in a photojournalistic manner, naturally in their habitat.

In his artist’s statement, he describes his method: “I believe that being close to the animal makes a huge difference in the photographer’s ability to reveal its personality … I take my time and get as close as I can, inching my way to within a few feet of the animals.” 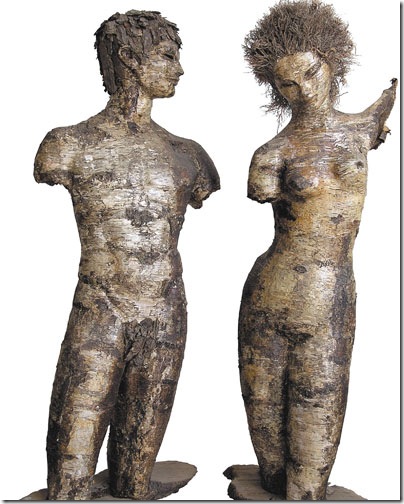 Sculpture in the fair ranges from classical to abstract to the highly unusual Adam and Eve by Janine Janet (1913-2000), in which the artist appliquéd birch bark and roots onto unique 50-inch tall plaster forms. These works by the late French artist who collaborated with Jean Cocteau are in the Alebreton Gallery and are priced at $295,000. 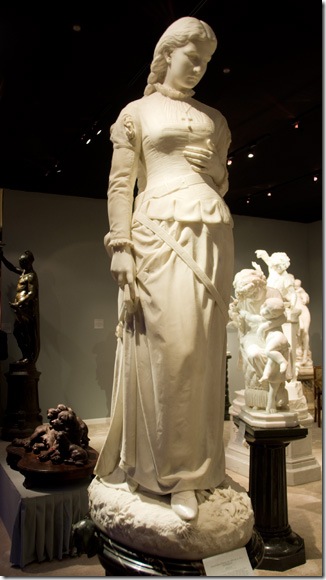 Visitors should make sure to see Saint Margherite, by Florence-born sculptor Salvatore Albano (1841-1893) in the Eduardo Cohen booth. Albano’s depiction of the saint in marble is on par with the best in classical sculpture, down to the minute detail of fabric and texture. 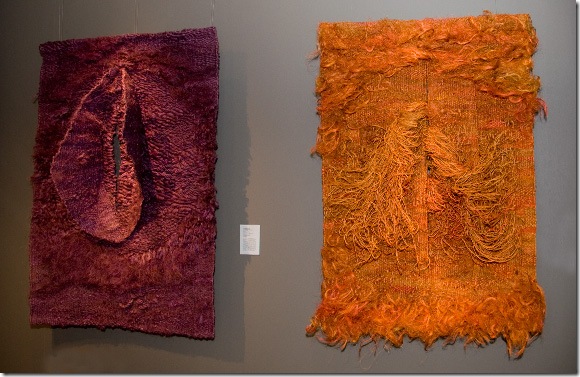 Abakanowicz’s (b. 1930) work was in five Swiss Biennales and is sought after by collectors and museums alike, he said. Her purple tapestry Stadium Faktur shimmers with texture, depth and femininity. Tawney (1907-2007) is represented by wall hangings, collage and mixed media assemblage sculpture that is fascinating in its juxtaposition of materials and symbolism. For example, in Bird Boy, she combined an old, battered cloth mannequin torso and legs of a boy with a bird for a head.

The fair also features a lecture series with art scholars, dealers, museum curators and other art specialists. Visit the fair’s Web site for dates and times.

The American International Fine Art Fair is open to the public from noon to 7 p.m. through February 7 and noon to 6 p.m. on February 8. General admission fees range from $25 for a one day pass, $35 for a multi-day pass or $45 and $55 respectively with a catalogue. For more details on fair activities, please visit the
AIFAF Website at www.aifaf.com or call (239) 949-5411.

Film: Playwright August Wilson began his chronicle of the African-American experience throughout the … END_OF_DOCUMENT_TOKEN_TO_BE_REPLACED

Film: Just in time with the opening of movie theaters in Palm Beach County comes the season’s most … END_OF_DOCUMENT_TOKEN_TO_BE_REPLACED

Music: The very last concert Franz Joseph Haydn attended in his life was in March 1808, about a year … END_OF_DOCUMENT_TOKEN_TO_BE_REPLACED