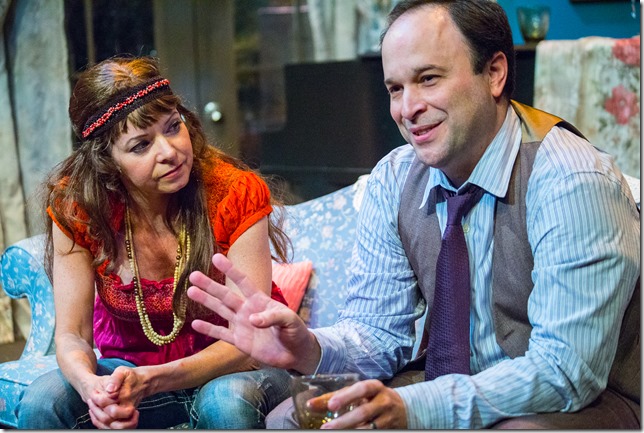 Same Time, Next Year is an engaging play with a fairly basic plot. Still, it is filled with intrigue that runs the gamut from humor to tragedy and guilt to glorious lessons learned.

And while a number of people are mentioned in this play, Same Time, Next Year is still a two-person production that either rises or falls depending on how well the stars can carry more than 90 minutes of dialogue without losing the audience’s attention.

Same Time, Next Year has the polish and witty banter of an early Neil Simon play, but is actually the work of Bernard Slade, a Canadian playwright, now 86, who also wrote the play Tribute. But he is perhaps better known for creating the TV shows The Flying Nun, Bridget Loves Bernie and The Partridge Family.

A 1975 comedy that spawned a film three years later, Same Time, Next Year tells how a New Jersey accountant named George and a housewife named Doris agree to meet at a hotel in Northern California in 1951 to have an affair. While their initial encounter seems sexually successful, they are both beset with doubts and worries about the propriety of what they are doing.

So, rather than fool around behind their spouses’ backs at various times during the year, they agree to meet at the same hotel on the same day the following year to continue their extramarital adventures. And they do so annually from 1951 to 1975.

During their special times together, they spend a lot of time talking about their spouses, their kids, their own feelings and misgivings, their marital problems and how they adapt to the social, moral, and political changes affecting them and those around them. As a result, they become “friends” with each other as well as George’s wife, Doris’s husband and all their kids.

George and Doris’s once-a-year gigs have built-in difficulties, and Slade’s method of telling the story, in six, serialized scenes over the course of two acts, underscores these occasional troubles. During one tryst, Doris arrives pregnant. In a later get-together, she has adopted the demeanor of a hippie, jumping into George’s arms and demanding immediate sex — though spoken in a much cruder way.

As the pair matures, their politics and social beliefs begin to separate. Doris remains fairly open and liberal — a holdover from the 1960s, perhaps — while George takes a decidedly right turn. (“You voted for Goldwater?” Doris gasps at one point). As time passes, though, they develop an emotional intimacy that transcends the physical aspects of their liaisons.

Director Rogow says the interesting way the performers grow fuels our interest in the show and the actors. “This isn’t just a romantic comedy; it explores two characters facing huge societal changes: the move to the suburbs, the Vietnam War, women’s Lliberation and more.”

Korinko and Laggy bring their own levels of expertise to their roles in the Bernard Slade play. Making her debut at the Margate performance center, Laggy jumps into the Doris role fresh from her appearance in another two-person show, Sex with Strangers, at the Arts Garage in Delray Beach. 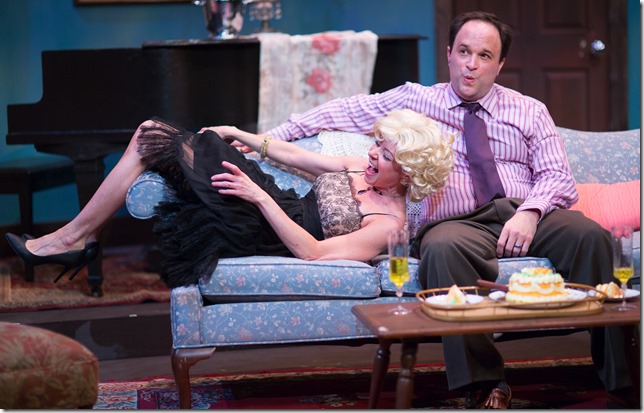 Laggy seems exceedingly comfortable as Doris, quite capable of adapting her to the changing times and changing demands. She can be very funny or sad at a moment’s notice. Clearly, she has solid stage presence.

Korinko, executive director of Slow Burn Theatre Company, has performed in Gypsy and Rumors at Broward Stage. The latter won a 2012 Carbonell for Best Ensemble. Korinko doesn’t allow his character to become categorized as a heartless seeker of sexual favors. With lots of tics and twitches, he displays George’s susceptible side, as thought someone is stepping hard on his internal gas pedal.

Korinko beautifully displays George’s vulnerability in one particular scene when he has to take a call from his young daughter while in the hotel room with Doris. The little girl has lost a tooth and is worried that the Tooth Fairy won’t find it. When George tells her, “I love you,” tears could easily flow from the audience’s eyes.

Same Time, Next Year will run through May 22 at the Stage Door Theatre, 8036 Sample Road, Margate. Tickets are available at the box office at 954-344-7765 or online at www.stagedoortheatre.com.

Film: Playwright August Wilson began his chronicle of the African-American experience throughout the … END_OF_DOCUMENT_TOKEN_TO_BE_REPLACED

Film: Just in time with the opening of movie theaters in Palm Beach County comes the season’s most … END_OF_DOCUMENT_TOKEN_TO_BE_REPLACED

Music: The very last concert Franz Joseph Haydn attended in his life was in March 1808, about a year … END_OF_DOCUMENT_TOKEN_TO_BE_REPLACED