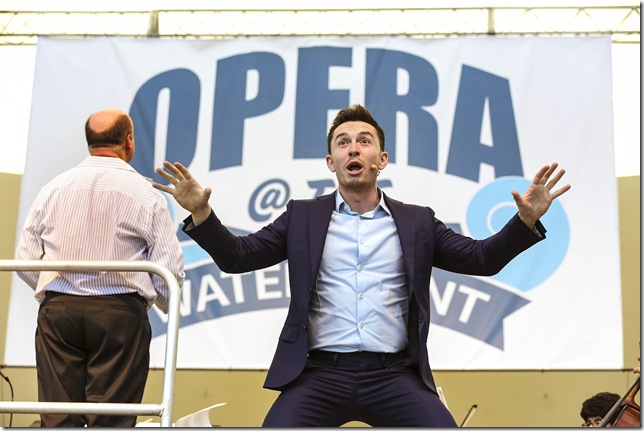 The third free opera concert at the waterfront given by Palm Beach Opera was an artistic success. But who were the artists?

Getting off to a good start with the national anthem and Bernstein’s Candide overture, conductor Greg Ritchey then introduced the wonderful Metropolitan Opera baritone Michael Chioldi and the next singer, Robert Watson, but forgot to name the other singing Young Artists on the program.

One lady — a Palm Beach Opera subscriber — turned to me at the end, distressed, saying she had no idea who the singers were. A master of ceremonies is clearly called for at these concerts to give a thumbnail sketch if the song isn’t in English and to introduce each singer. A stage director would be helpful, too: the final bow taking was a shambles, some going off, others stopping to “steal that extra bow.” Even this needs rehearsal.

Artistically, though, the standards were very high. The 4,000-plus attendees at the Meyer Amphitheater on Saturday afternoon roared their approval many times. From 4-week-old baby Angeline and her opera-loving parents, to a spectrum of all age groups, everyone seems to have had a good time. Arriving as early as noon, two hours before the concert began, rows of folding chairs were already arranged in lines. Picnic lunches came out of wicker baskets; wine and cheese, hummus and cucumber sandwiches, coffee, water or iced tea.

A festive atmosphere prevailed after four days of rain, the sun blessing the proceedings on Flagler Avenue in West Palm Beach. Even the motorcycles were silent, though a racing Maserati cut into the last Puccini piece. Mary Montgomery, widow of a former opera company chairman, made all this happiness possible with a generous grant. This is the best kind of outreach devised by the company.

Let’s see if I can help our bewildered audience member by naming the singers in the order they sang. And if you see a voice or singer you liked, put a name to it and hear them again in Carmen this January and Ariadne auf Naxos in March. 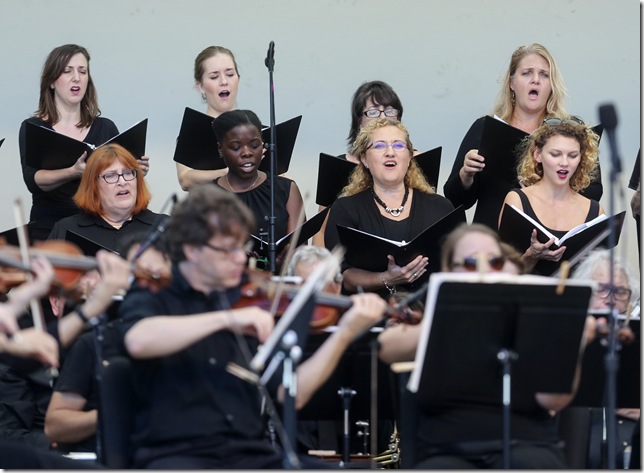 Gracing the stage with his handsome presence, baritone Chioldi opened the singing with “Si puo, si puo” from Leoncavallo’s opera Pagliacci. He was perfection. His voice gets richer and richer. He surely ranks as the leading Verdi baritone on the American operatic stage today. After his aria the chorus joined him in the opera’s “Bell Chorus.” Together they were splendid.

Here I must make my annual pitch for more chorus numbers, please: Two-and-a-half is not enough from these fine people. What little we heard was magnificent.

Watson, a holdover from last year’s crop of Young Artists, sang the Flower Song from Bizet’s Carmen. He has a lovely tone and sang with absolute conviction. However, I feel he relies more on head tone, poorly supported, than deep breath control from the diaphragm. He could become the next Richard Leech, though; all the signs are there in his still-young voice. 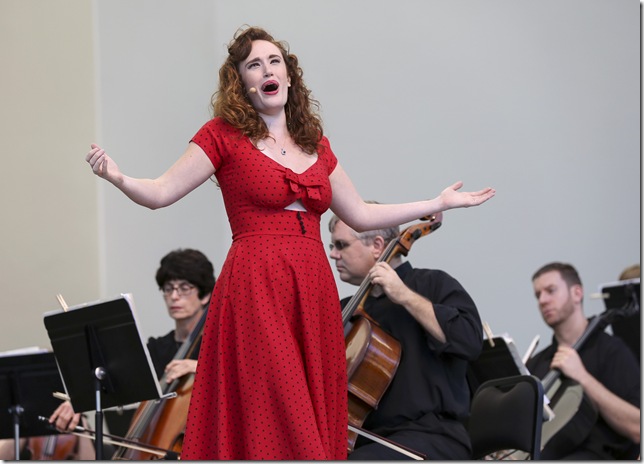 Don Pasquale, Donizetti’s battle of the sexes (and the company’s February production), brought an exciting duet from soprano Jessica Fishenfeld and bass-baritone Andrew Bogard, who got slapped a time or two. Next came the amazing Bridgette Gan, a fellow last year, now an opera star. Her soprano could break glass: the range is sensational and her pitch, perfection, as she sang Zerbinetta’s Rondo from Strauss’s Ariadne Auf Naxos. Impresarios will be happy to hire her. She’ll fill seats with a command of vocal pyrotechnics like hers.

Chioldi was joined by mezzo-soprano Danielle MacMillan in Mozart’s “La ci darem la mano” from Don Giovanni. It was a sweet rendition, but MacMillan seemed nervous in her delivery. A second mezzo, Fleur Barron, came off a little better in Rossini’s “Cruda sorte” from The Italian Girl in Algiers, which came next. Barron has echoes of the great Marilyn Horne in her delivery; her voice has that very special quality. It cemented why we come to hear these youngsters, hoping we’ll find the next great opera star.

Baritone Jason Duika was joined by chorus in an aria from Ambroise Thomas’s 1868 opera Hamlet. It was a fine dramatic piece and his lovely voice soared over everybody with ease at the end. Next came the best quartet ever, Verdi’s “Bella figlia dell’amore,” led by Chioldi as Rigoletto,

Fishenfeld as Gilda, Watson as the duke of Mantua and Barron as Maddelena. It is Maddalena’s low repeated phrases that stand out at the end and Barron did not disappoint.

An obscure intermezzo for the orchestra from an even more obscure opera by Mascagni, Guglielmo Ratcliff, was next. It premiered in 1895 at La Scala, and is about a Scottish highwayman and the Douglas clan. As the orchestra played so tenderly I remember thinking it would be a good idea to cut two paths through them, one stage left, one stage right, to avoid the long circumferential walk round to the front of the stage singers must make on their journey to entertain.

Street Scene, Kurt Weill’s take on an Elmer Rice story about tenement life in New York City, came off with a bang as six singers, Watson, Fishenfeld, Bogard, Barron, Duika and a new voice, tenor Spencer Viator, sang about ice cream. Viator was the standout, with all the best parts in this sextet. He was in his element, a born entertainer; he riveted my attention throughout, which takes some doing with five other excellent talents jockeying for a spot. 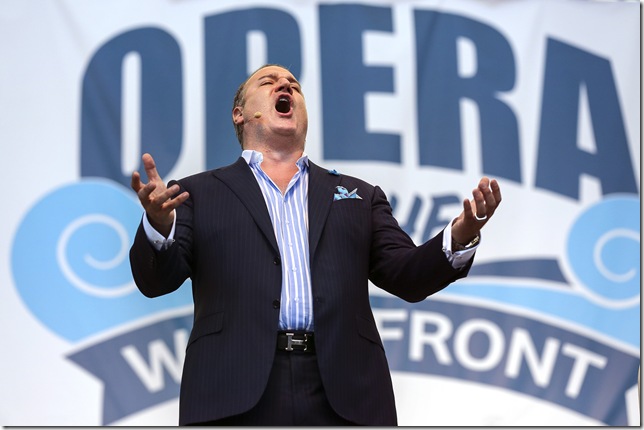 With much feeling and plenty of heft in his voice, guest artist Chioldi thrilled as he sang “O Carlo, ascolta” from Verdi’s opera Don Carlos. Next came the lovely trio from Cosi fan Tutte by Mozart, “O soave sia il vento.” It was a dreamy moment — all too short, alas — sung beautifully by soprano Liana Guberman, Bogard and MacMillan, whom we’d heard earlier. Their voices blended perfectly and Bogard anchored the two higher voices with subtle dexterity and sensitive accompaniment.

The chorus, joined by Viator, came next in Stephen Foster’s “Beautiful Dreamer,” which was noteworthy for its measured interpretation. Bogard appeared once again to solo in the fine Rossini aria about spreading rumors called “La calunnia,” from the Barber of Seville. He was superb. Now in full voice, his highs and lows were perfection, even his “sotto voce.” I could not help thinking a costume would have given his rendition that much more. I quibble. He got a rousing ovation anyway. Another born entertainer with a fantastic bass-baritone voice, supple and deep. I’d love to hear him sing Osmin.

The audience got a chance to sing a couple of lines from “Vilja” by Franz Lehar from his operetta, The Merry Widow, under the tutelage of Ritchey. Guberman was excellent. Her rich, round soprano reminded me of an earlier Renee Fleming who is singing this role at the Met next year. Chioldi followed this with “This Nearly Was Mine,” from Richard Rodgers’s South Pacific. This most beautiful ballad gets my vote for best performance of the afternoon. It was perfection again from a sensitive artist. His voice kept ringing in my mind for days after it was all over. That’s the kind of spell he casts when he sings a ballad of this kind.

An odd choice to end the waterfront concert was Puccini’s quartet, “Bevo al tuo fresco sorisso,” from Act II of La Rondine, with Guberman, Gan, Watson, and Viator. They were great in this somber and beautiful reminder of unrequited love. But wait. This was not the end. 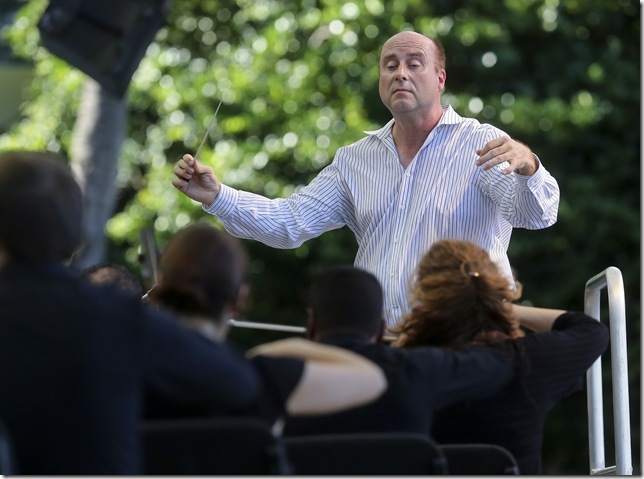 As we packed to leave, all the singers assembled on stage to sing the “Libiamo” from Verdi’s La Traviata. Viator was a convivial convincing Alfredo and Gan a lovely Violetta. Missing were the champagne glasses used to toast the celebrants, but we had them in our picnic baskets.

Rex Hearn founded and headed the Berkshire Opera Company from 1985 to 2009.

Film: Playwright August Wilson began his chronicle of the African-American experience throughout the … END_OF_DOCUMENT_TOKEN_TO_BE_REPLACED

Film: Just in time with the opening of movie theaters in Palm Beach County comes the season’s most … END_OF_DOCUMENT_TOKEN_TO_BE_REPLACED

Music: The very last concert Franz Joseph Haydn attended in his life was in March 1808, about a year … END_OF_DOCUMENT_TOKEN_TO_BE_REPLACED