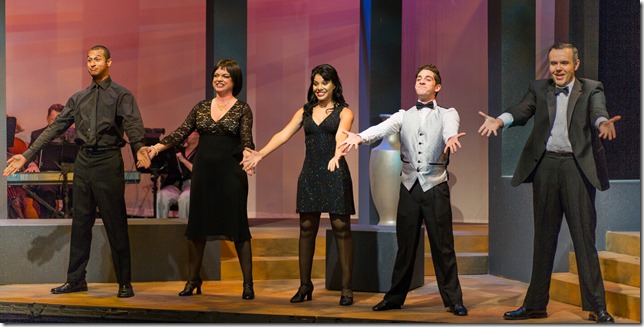 Music is the medium that has carried most of the shows at the Broward Stage Door Theatre in Margate during the 2015-2016 season. And we’ve got the stats to prove it.

Putting It Together, a compilation of nearly 30 songs by famed composer/lyricist Stephen Sondheim that’s currently playing at the Sample Road venue, is the 10th show of the season. And it’s the eighth one that floats through the evening on tuneful wings.

The powers-that-be at Broward have mingled some traditional musicals — Gypsy, Carnival and Evita among them — with jukebox shows. Director Michael Leeds and choreographer/co-director Kevin Black have crafted two of them — Pompadour and What’s New, Pussycat?

The song-heavy show now being staged in Theater 1 was created in the early 1990s in response to numerous requests for a new production similar to the 1976 Tony Award-winning revue, Side by Side by Sondheim.

Putting It Together lies somewhere between the generally accepted format in which music and dialogue combine to help move the plot, and the less-rigid revue style that presents song after song, sometimes tied to a theme, but usually with little explanatory talk.

The current production features two couples — a pair of mature marrieds (Ann Marie Olson and Jason Plourde) and two young lovers (Alexandria Lugo and Darrick Penny) thrown together at a cocktail party in a Manhattan penthouse. They, along with a narrator (Anthony Massarotto), provide insight and commentary about the complexities of modern relationships through songs from Sondheim shows.

The tune-filled ode to the now 86-year-old sultan of lyrics and songs has a lot of strong points. The five performers are excellent vocalists; Olson, in fact, is a Carbonell Award winner for Parade with the Slow Burn Theatre Company and two-time nominee. The musical accompaniment is provided by a four-person band led by pianist David Nagy. And the lyrics are laced with sharp wit and intricate wordplay. 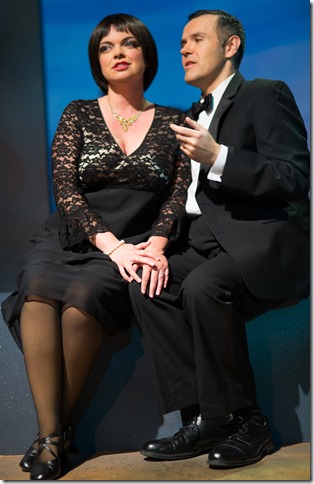 Ann Marie Olson and Jason Plourde in Putting It Together at the Broward Stage Door Theater. (Photo by George Wentzler)

Even though the show was devised by Sondheim and Julia McKenzie, an English actress, singer and theater director who appeared in Side by Side by Sondheim and several of the composer’s other works, some songs just don’t work when moved into the world of Putting It Together. Also, the production spends little time explaining the format. After a while, the audience finally gathers that the show is about two couples and a singing narrator in a specific situation.

Some tunes are also a bit too negative. “Buddy’s Blues,” from Follies, an up-tempo number performed so well by Massarotto, is a bit too blue. And when Plourde sings “Good Thing Going,” from Merrily We Roll Along, it ends with a sad comment, “Going … going … gone.”

Sondheim’s sense of humor does show in several numbers. Olson does an excellent job with the song, “My Husband is a Pig,” from A Little Night Music. This tune certainly tells it like it is. Of course, “Everybody Ought to Have a Maid,” the only song in the show from A Funny Thing Happened on the Way to the Forum, is bouncy and just plain fun. Massarotto and Olson capture the mood of the “Maid” song — and then the others blend into a pitch-perfect harmonious encore.

Olson soon comes back with a great version of the satirical tune, “The Ladies Who Lunch,” which mockingly judges rich women who waste their lives doing nothing meaningful. The late actress Elaine Stritch, who portrayed Joanne in Sondheim’s musical, Company, made it her signature song.

The five players combine to open the show with “Putting It Together,” a song from Sondheim’s Sunday in the Park with George. Each vocalist is a delight — and when they sing with one another or all together, the results are even more delightful.

Director Peter J. Loewy says Putting It Together “is filled with melodic ballads, Broadway classics and a few songs that might not be all that familiar to some of our audiences, but will resonate just the same.”

Helping them to resonate are musical director Nagy along with fellow musicians Andrea Gilbert, Julie Jacobs and Martha Spangler.

Putting It Together plays through June 11 at the Broward Stage Door Theatre, 8036 W. Sample Road, Margate. Tickets are available by calling 954-344-7765 or online at www.stagedoortheatre.com.

Music: The very last concert Franz Joseph Haydn attended in his life was in March 1808, about a year … END_OF_DOCUMENT_TOKEN_TO_BE_REPLACED

Film: Major League Baseball culminates each season with the World Series, but to find the true … END_OF_DOCUMENT_TOKEN_TO_BE_REPLACED