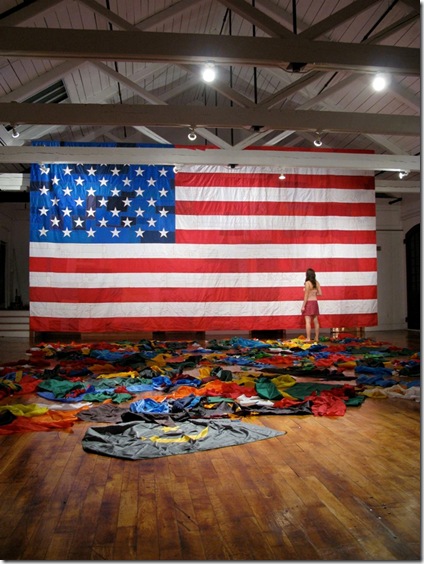 A month ago I sat to write the art preview for the upcoming season and included a then-future exhibit at the Norton Museum that promised to make us think. But I did not know how just yet.

Dave Cole: Flags of the World has been running since early November and delivered on its promise.

A commanding 15-by-30 foot American flag hangs in the middle of the white room. This is the much-awaited centerpiece whose size thrilled me from the minute I learned it was coming to the Norton. Cole cut the red, white and blue fragments of fabric out of the 192 international banners from an official United Nations flag set and stitched them together with gold thread to form this gigantic quilt-like American beauty. It is majestic and accurate.

The Rhode Island-based artist built it following the specifications from the U.S. Marine Corps Flag Manual; thus, you know you are seeing a real American flag and not the artist’s version of it.

I would love to say it is the highlight of the installation, but once your eyes have seen and registered it, they drop to the floor like weights and stay there. It is here, at the foot of one suspended giant flag, that the remnants from the other flags of the world rest. They appear spread out in small colorful piles. No particular order to them.

This is a sight that’s hard to swallow, especially for the immigrant/foreigner. People have died trying to keep flags like these up, but it would be too obvious and predictable to get upset. I think the artist expects it, too. He has invited viewers to write their comments on the white sheets against the walls. They are not all positive.

“Grotesque and macabre,” reads one of them.

“Biggest waste of space I’ve ever seen,” reads another.

There are about 11 sheets so far calling the scene patriotic and outrageous, gorgeous and disrespectful. They are all right. The show comes across as both.

The best way to take it in is to stand in the room and trust your instinct; within seconds, you will know how you feel intuitively. Try not to get influenced by the comments already written.

Once inside the museum, there are two ways to get to Flags of the World. The way you happened into the gallery room is crucial, because it makes a big difference whether you see the actual work before a video of the artist discussing the installation. If you are one of those, like me, who saw the piece first and the footage later, resist the temptation of leaving any feedback right away. Watch it before you make up your mind and leave your comment/contribution.

There is also more than one way of looking at the work, the simplest of which is: America is a melting pot. Some will see it as a cruel, egotistical representation of America and its power over other nations. Some will say it reflects an America that takes what it wants and leaves behind a mess, or an America that feeds from the rest of the world, as a vampire.

But an entirely different possibility has it being a humble America that recognizes it is the combined contributions and sacrifices of all nations. Some will see this, too: an America that says thanks, that knows it would not be what it is today without the rest of the world.

The beauty of Flags of the World is that its meaning varies with each viewer.

Personally, I think that if it was indeed the artist’s clear intention to depict an America that is grateful, there have got to be better ways to show the world America appreciates them. But Cole did not want to make anything clear. The Brown University honors graduate, who became well-known in 2005 with an installation called The Knitting Machine, wants to leave it up to you. His work is not about telling people how they should feel. It is more about reflecting a contradictory notion and let people experience those contradictions.

This does not mean Cole, as a person, lacks a personal take or opinion on his own piece. What is his personal view then? That is a complicated question, as he himself admits on camera. I’m going to guess he feels closer to the view that America takes what it needs and leaves the rest behind. I could be wrong, of course, but this idea is mentioned twice in a 6-minute video so it is a good guess — and he has asked that I leave my opinion in writing, after all.

As I stood near the wall with the handwritten comments, some museum custodians handed me a pencil. Before I could start writing they shared anecdotes of the opening night. As word got around this installation was going up, some museum staff, whose motherland is not America, began coming in and out of the room. They were mortified, I was told.

I can understand that. The flag of my motherland was there, too, but I cannot say I took it personally. My jaw was not locked.

Film: Playwright August Wilson began his chronicle of the African-American experience throughout the … END_OF_DOCUMENT_TOKEN_TO_BE_REPLACED

Film: Just in time with the opening of movie theaters in Palm Beach County comes the season’s most … END_OF_DOCUMENT_TOKEN_TO_BE_REPLACED

Music: The very last concert Franz Joseph Haydn attended in his life was in March 1808, about a year … END_OF_DOCUMENT_TOKEN_TO_BE_REPLACED