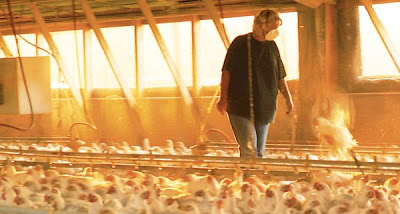 Movies are a very effective medium for entertainment, but can they fundamentally change the way we think about the food that we eat?

That is the task that director Robert Kenner gives himself in Food Inc., a look at what has happened to the livestock, poultry and produce we consume ever since the corporate world took over farming and turned it into big business.

This documentary peek at how our food gets to our dinner tables is not for the squeamish. The fast-food industry is particularly slammed for turning farms into inhumane assembly lines and Kenner — using 60 Minutes-style ambush interview, hidden camera techniques — rubs the audience’s noses in the distasteful breeding conditions.

More nefarious yet is the genetic engineering of our food in the name of supermarket eye appeal and uniformity. Also much maligned is the rise of high-fructose corn syrup, a cheaper, more accessible substitute for sugar, which has crept into virtually every processed product on the grocery shelf, dulling our tastebuds.

And with corn replacing grass in the diets of beef cows, the result according to Kenner and his talking head experts is diseased animals that pass on the E. coli virus, causing mass illnesses in the end consumers. Seen roaming the halls of Congress is the mother of a boy who died from the virus, desperate for some legislative relief that has yet to materialize.

Food, Inc. is grim stuff, with a sensationalist tone of muckraking, delivering an undeniably important message, but with a sledgehammer. Before long, one yearns for the cynical humor of a Michael Moore (Sicko) or even a Morgan Spurlock (Super Size Me). Another critic of the fast-food system, Eric Schlosser (Fast-Food Nation) appears prominently in Food, Inc.

The film wants to shock the public into becoming wiser, more informed consumers, weaning ourselves off of fast and processed foods, towards organic. That means more expensive grub, which is a hard sell in these economic times.

If you go to Food, Inc., bring a pencil with you. It ends with a flurry of phone numbers and Websites, a call to action and an invitation to acquire more information on the state of our food supply. The film is well-made and well-meaning, and no one who pays attention to its message is going to want to eat much afterwards.

Whether it will have a lasting effect, though, remains to be seen.

Film: Playwright August Wilson began his chronicle of the African-American experience throughout the … END_OF_DOCUMENT_TOKEN_TO_BE_REPLACED

Film: Just in time with the opening of movie theaters in Palm Beach County comes the season’s most … END_OF_DOCUMENT_TOKEN_TO_BE_REPLACED

Music: The very last concert Franz Joseph Haydn attended in his life was in March 1808, about a year … END_OF_DOCUMENT_TOKEN_TO_BE_REPLACED