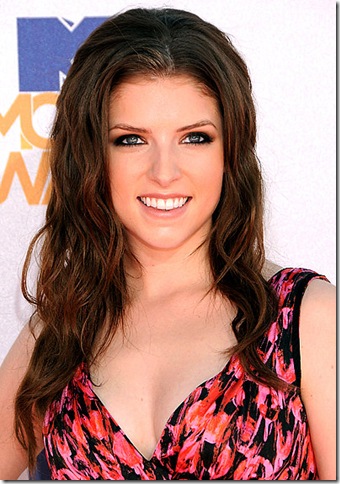 You could never accuse Anna Kendrick of avoiding offbeat projects.

She copped an Oscar nomination two years ago as the cold-blooded tech geek in Up in the Air, a comedy about corporate downsizing. In 2007, she co-starred in a high school debate team tale with the off-putting title of Rocket Science. And this Friday she plays a novice therapist in the cancer comedy, 50/50.

“This certainly wasn’t what I expected to do right after ‘Up in the Air,’” says the petite Kendrick, 27. “It was very inconvenient to fall in love with the script where when you describe it, it sounds a little tricky. It would have been a lot easier if I didn’t like it.”

A lot of scripts came Kendrick’s way after the success of Up in the Air, but they were all for similar characters. “I got a lot of offers to play heartless, uptight, ambitious characters,” she says. Katherine, the inept therapist in 50/50, “was interesting because she is so vulnerable. She has such a big heart and gets in her own way by kind of over- thinking things. But it’s only because she cares so much.

“Katherine’s sort of sweet and endearing, because she’s such a mess,” Kendrick adds. “All her emotions are like right on the surface. She’s got the thinnest layer of confidence of anyone.”

50/50 is written by Will Reiser, who got his start on Da Ali G Show, and who did contract a rare cancer while he was in his 20s. Joseph Gordon-Levitt plays the central character based on Reiser, and Reiser’s close friend Seth Rogen plays a sidekick based on himself. Kendrick’s Katherine, however, is a fictional invention, which gave her a great deal of latitude in developing her.

“I really got to build the character from the ground up,” she explains. “We felt like this was a girl who her friends always came to her for advice. She’s a great listener, and she thought, ‘Great, I’ll be good at this,’ but right now she’s just not trusting her instincts. She’s getting in her own way. She’s too in her head.”

The film is directed by Jonathan Levine (who made the critically admired, but little seen The Wackness three years ago). He mentioned to Kendrick that he cast her based on her performance in Rocket Science, which also has a small, but avid following.

“I feel like most filmmakers that hire me have seen ‘Rocket Science,’ which no one in the real world saw,” Kendrick says. “Lucky for me, lots of artsy-fartsy director types saw it, like Jonathan.”

Kendrick began in the theater, having the distinction at 12 of being the second youngest performer to ever earn a Tony Award nomination (for 1998’s High Society). As a stage performer, she is used to a rehearsal period, something she has learned to do without while making movies.

“It was crazy,” she says of the minimal prep time on 50/50. “I knew Joe (Gordon-Levitt) for maybe 17 minutes before we did our first scene together, that was pretty well into the story.” 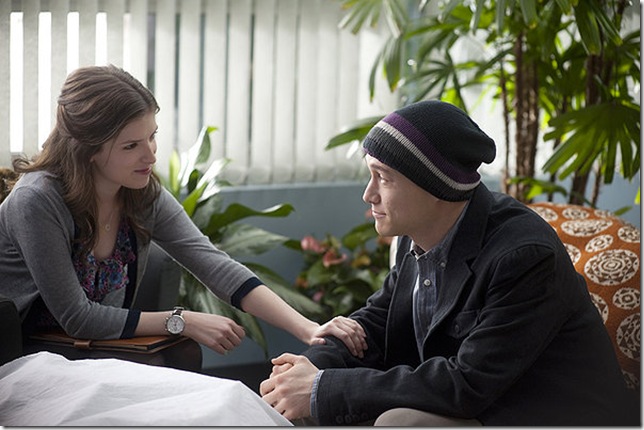 Still, as filming continued, Kendrick began to sense that this could be an exceptional project. “I felt like something very special was happening. But then you get in your head and you think, ‘Well, if the dailies are good, maybe the movie won’t be.’ I just tried not to jinx it.”

“I knew it would be good, but I thought it could be one of those messed-up things that a couple of people in the world really love. I guess I underestimated how relatable it is, to try and laugh through something difficult.”

Even if 50/50 does not live up to the buzz that surrounds it, Kendrick has four other movies in post-production. Not the least on them is the fourth installment of the Twilight franchise, Breaking Dawn, due out in mid-November. But do not expect her to reveal much about what is in that movie.

“It’s probably better that I don’t,” she says sheepishly. “Listen, there’s a book, so everybody already knows what happens, but I still feel like I’m going to have my tongue cut out if I say the wrong thing.”

Then there’s a cop drama called End of Watch, an ensemble comedy (What to Expect When You’re Expecting) and something titled Rapturepalooza.

“Oh my God, that movie is crazy,” Kendrick gasps. “Craig Robinson plays the Anti-Christ and he decides that we should get married. I realized the other day I think I’m trying to kill my grandmother by being in that movie. She can never know that I’m in it.”

Something tells us that keeping any movie with Kendrick under the radar — even from her grandmother — is going to be very difficult from here on.

Film: Playwright August Wilson began his chronicle of the African-American experience throughout the … END_OF_DOCUMENT_TOKEN_TO_BE_REPLACED

Film: Just in time with the opening of movie theaters in Palm Beach County comes the season’s most … END_OF_DOCUMENT_TOKEN_TO_BE_REPLACED

Music: The very last concert Franz Joseph Haydn attended in his life was in March 1808, about a year … END_OF_DOCUMENT_TOKEN_TO_BE_REPLACED