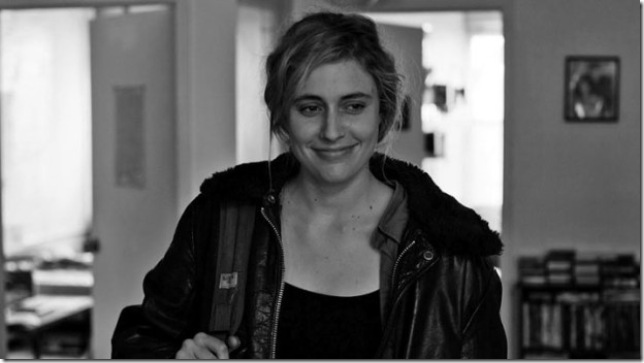 Greta Gerwig – intelligent, gangly, un-classically beautiful and uniquely fetching — is now poised to be the new Parker Posey. That is, if there wasn’t already a new Parker Posey I missed, some indie-film It Girl throbbing the hearts of hipsters in the first decade of the Aughts. At any rate, after a number of memorable supporting roles, she’s ready for her close-up, and she gets it in Frances Ha. In fact, she gets lots of loving close-ups in Frances Ha, the new black-and-white character study she co-wrote with her real-life partner Noah Baumbach, who directed it.

Gerwig clearly is a muse for the talented filmmaker, but Baumbach never treats her like a radiant goddess. Like other Baumbach protagonists, her title character is caught in a post-collegiate malaise. Not mature enough for the Real World, she’s still living out of a dorm figuratively and, at one point, literally. Baumbach and Gerwig celebrate Frances’ most uncouth quirks; we see her pop a zit onscreen, then make jokes about her intrusive acne. She’s told at one point that she looks older than her years, and she does. Her title character, a struggling 27-year-old dancer, is slothful, rootless, insecure, socially awkward, delusional of herself and others, dangerously impulsive in her poor decision-making and, as one character frequently puts it, “undateable.”

And yet we just may fall in love with her by the end of it, and at the very least, we want her to succeed. She’s got a great sense of humor, and so does this film, brimming with real-life wit and relatable situations; my favorite is the scene in which Frances, desperate for late-night cash, finally finds an ATM but almost refuses to use it because of the $3 bank fee. For critics and audiences repelled by the unlikeability of Baumbach’s last cinematic problem case, Greenberg in Greenberg, Frances Ha should come as a welcome change of pace.

If there’s one theme that defines Frances, it’s lack of stasis. In the opening scene, she effectively ends her relationship with her boyfriend, which had become passionless anyway; it’ll be the first of several failures in her personal and professional life. Frequently uprooted by causes not always prompted by her actions, she finds herself couch-surfing across scattered New York City milieus, and Baumbach’s episodic film is divided by title cards indicating her varied address changes over the course of a year or so. Even her one constant, her like-minded best friend Sophie (Mickey Sumner) — “We’re the same person, with different hair,” Frances likes to say — seems to be drifting apart.

Frances Ha’s overriding genre is pain-tinged comedy that would border on schadenfreude if the director’s style wasn’t so exuberantly optimistic, a visual counterpoint to the character’s spiral. Baumbach soaks his film in vintage New Wave ambience, from its grainy, monochrome photography and lively montages to its more direct associations: a reference to Jean-Pierre Leaud, a Jules and Jim homage, and a running-in-the-streets scene choreographed to David Bowie’s Modern Love, which conjures a similar moment from Leos Carax’s New Wave-inspired Mauvais Sang (1986). Gerwig is a great frolicker despite her increasingly downward trajectory, and her spur-of-the-moment dancing scenes sometimes feel like an extension of her character in last year’s winning comedy Damsels in Distress.

(May be spoilers herein.) As far as Frances’ surviving the film’s mountains of misfortune, I can already hear the gripes that Baumbach has gone soft on his protagonist, awarding her something like a fairy tale denouement. Certainly, Frances gets off better than Josh Hamilton in Baumbach’s Kicking and Screaming, who is stuck in a talky feedback loop with his aimless buddies, forever living in the memory of the ex-flame he’ll never see again. Or Jesse Eisenberg’s character in The Squid and the Whale, who likewise ends the film chasing a memory of better times, before broken homes and broken hearts left him preternaturally jaded.

But remember that in Greenberg, Baumbach left plenty of hope for Ben Stiller and Greta Gerwig to forge something like a relationship, and in Frances Ha, the sun has just opened up a little bit wider for her. As long as this astute former curmudgeon continues to make films as funny and clever as Frances Ha, he can end them however he likes.

Film: Playwright August Wilson began his chronicle of the African-American experience throughout the … END_OF_DOCUMENT_TOKEN_TO_BE_REPLACED

Film: Just in time with the opening of movie theaters in Palm Beach County comes the season’s most … END_OF_DOCUMENT_TOKEN_TO_BE_REPLACED

Music: The very last concert Franz Joseph Haydn attended in his life was in March 1808, about a year … END_OF_DOCUMENT_TOKEN_TO_BE_REPLACED