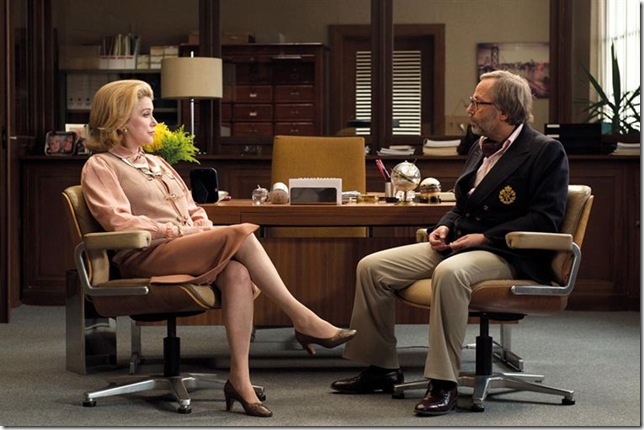 An alternative title of Potiche could have been Men on the Verge of a Nervous Breakdown. In this, the latest film from French directorial chameleon François Ozon, the men are the irrational ones – clingy, petulant and generally bewildered – while the film’s female protagonist, played by Catherine Deneuve, is the film’s rational, resolute, forward-thinking, confident and wholly electable moral center.

It’s never been surprising that women can be all of these things, of course, but in the ostentatiously sexist context of Potiche, set in the industrial 1970s, Deneuve’s muscular and intellectual outpacing of her male counterparts causes quite a stir.

Loosely adapted from a 1980s French play and staged largely in and around an umbrella factory full of disgruntled workers, Potiche looks at feminism and worker’s rights in an era that saw little of either. Fabrice Luchini plays Robert Pujol, the buffoonish, adulterous, antiunion proprietor of the factory who is all but overthrown by his deceptively airy trophy wife Suzanne (Deneuve). She gains a majority stake in the company and proceeds to properly compensate its workers and modernize its stock, with some help from her best frenemy: Gerard Depardieu, a Old Guard left-wing politician who’s as big as Michael Moore (in more ways that one: You need an awfully wide screen to frame Depardieu’s increasingly morbid girth).

Depardieu’s Maurice Babin had a fling with Suzanne in another life, and he’s since played the jilted lover as convincingly as the jaded leftist. When it’s revealed that Maurice may in fact be the father of Suzanne’s liberal son Laurent (Jérémie Renier), it creates more comic schisms in a family already divided by politics.

Potiche is reminiscent thematically – and only thematically – of the recent Made in Dagenham, another historical look at the nexus of women’s rights and labor rights. But unlike the preachy, humorless Dagenham, Potiche is as light and refreshing as a pinafore.

Joyously colorful, just like the loudest Almodovar films, Potiche is a loopy and self-conscious comedy that takes its serious thematic grounding and sends it soaring into a deliberately artificial cinematic landscape full of unusual editing transitions, a cartoony score and hilariously stilted flashbacks. It’s hard to take this lush fantasy too seriously when one of the first shots in the film is of fornicating squirrels, one of many images of nature’s bounty that enlivens Suzanne’s exercise route.

It’s easy to see why; it’s a charming audience movie, not very demanding on those with subtitle phobia, and equally rewarding for mass audiences and urbane cinephiles alike. Deneuve and Depardieu, the last lions of the ’70s French cinema mainstream, aren’t getting any younger, but they have a lot of fun satirizing politics, history and themselves under Ozon’s sardonic camera.

Film: Playwright August Wilson began his chronicle of the African-American experience throughout the … END_OF_DOCUMENT_TOKEN_TO_BE_REPLACED

Film: Just in time with the opening of movie theaters in Palm Beach County comes the season’s most … END_OF_DOCUMENT_TOKEN_TO_BE_REPLACED

Music: The very last concert Franz Joseph Haydn attended in his life was in March 1808, about a year … END_OF_DOCUMENT_TOKEN_TO_BE_REPLACED