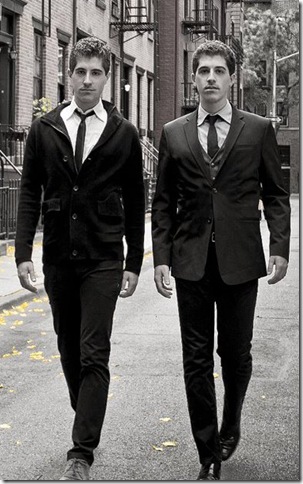 Most of the headliners at the Colony Hotel’s Royal Room, the premier cabaret venue in South Florida, are seasoned performers, which is to say long in the tooth.

The exception is the twin act of Will and Anthony Nunziata, a pair of fresh-scrubbed, curly-haired 28-year-olds who sing the American Songbook and Broadway standards, almost all written before their time.

Back at the Royal Room for their fourth time, leading off the supper club’s Summer Cabaret Season of emerging artists, the Brothers Nunziata ooze charm and personality as they work the room. With their charismatic two-part harmonies on show tunes recalled from childhood trips from Westchester to Broadway with their doting parents, their selections — ranging from Carousel to Sweeney Todd — are astute, even if their delivery could use a bit more variety.

Give them credit for having the good taste to assemble an act out of songs by Sondheim, Styne, Loesser and Newley, instead of the rock tunes preferred by Madonna and MTV. But for an intimate space like the Royal, they would do well to vary their material, put in a few soft ballads instead of building each song to American Idol volume. Intensity does not always equal quality.

While the Nunziatas still need some seasoning, and perhaps the outside eyes of a director, they are a naturally likeable duo that Friday’s opening night audience quickly embraced. They opened with a pulsing, upbeat Everybody Says Don’t from Anyone Can Whistle and followed it up with the smooth Make Someone Happy from Do Re Mi, both nicely arranged for piano and drums and the Nunziatas’ two voices.

Their duets and their between song patter are their strength, but they frequently spelled each other, handling such solos as As Long as He Needs Me (sung by Will, the gray-suited brother on the left) and You’ll Never Walk Alone (by Anthony in black, on the right).

Presumably it is their musical director/pianist Brad Gardner who arranged some savvy medleys — what the twins call “mash-ups” — of such numbers as Charlie Chaplin’s Smile and another song with the same title by a more contemporary tunesmith, John Bucchino. Also well done was the merger of two songs from the Newley-Bricusse trunk, What Kind of Fool Am I? with Who Can I Turn To?

On the personal side, the Nunziatas rolled out the Honey-Nut Cheerios jingle which they say paid for their college tuition, a Jesus-Judas duet on All For the Best from Stephen Schwartz’s Godspell — roles they played while attending Boston College — and an Italian number in tribute to their late grandmother.

Overall, their brief, 55-minute act relies too much on cute tics and gestures, but the Nunziatas have the vocal chops to entertain for an early summer’s evening.

Film: Playwright August Wilson began his chronicle of the African-American experience throughout the … END_OF_DOCUMENT_TOKEN_TO_BE_REPLACED

Film: Just in time with the opening of movie theaters in Palm Beach County comes the season’s most … END_OF_DOCUMENT_TOKEN_TO_BE_REPLACED

Music: The very last concert Franz Joseph Haydn attended in his life was in March 1808, about a year … END_OF_DOCUMENT_TOKEN_TO_BE_REPLACED