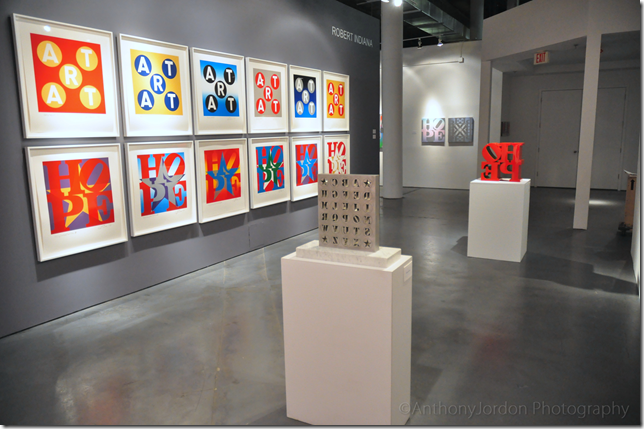 New work by heavyweight pop artist Robert Indiana can be seen at Rosenbaum Contemporary in Boca Raton. The octogenarian is the father of the iconic LOVE image, which he created initially as a sculpture in 1966, and has appeared around the world in various high- and low-brow incarnations. Now, he brings us a show entirely focused on another essential word: HOPE.

“It’s like the punctuation mark on his oeuvre,” said Daniella Sforza, the gallery’s curating director. “He’s always responded to the times, creating work that’s emblematic of what’s happening on a larger scale.”

The word “hope” resonates, perhaps because it’s associated with the Obama campaign and therefore embodies the country’s long-time-coming embrace of the promise of diversity.

Indiana’s bold, vibrant design and discordant color visually charge HOPE with that uplifting sense of promise the word conveys. One large central sculpture serves as the show’s focal point, around which a series of smaller sculptures, paintings and prints adorn the gallery’s white-cube walls. There also are some LOVE works on view.

The exhibit is a poignant and affirmative statement for an artist whose birthday, ironically, falls the week of Sept. 11. Coincidentally, a major retrospective of Indiana’s work has just opened at the Whitney Museum of American Art in New York City. Amplifying the show’s appeal are works by equally impressive artists, including Alex Katz and Frank Stella, which surround and complement the Indiana exhibit.

The recent addition to their team of the savvy Sforza, a former art journalist in Argentina, helps Rosenbaum Contemporary deliver both a sophisticated program and a full-throttle, SoHo-like gallery experience to the sleepy Boca Raton neighborhood where it’s located.

Voices of HOPE: Celebrating Robert Indiana is on view at Rosenbaum Contemporary until May 30, 2014. The gallery is at 150 Yamato Road in Boca Raton. Hours are 10 a.m. to 5 p.m. Tuesdays through Saturdays. For information, call 561.994.9180 or visit www.rosenbaumcontemporary.com. 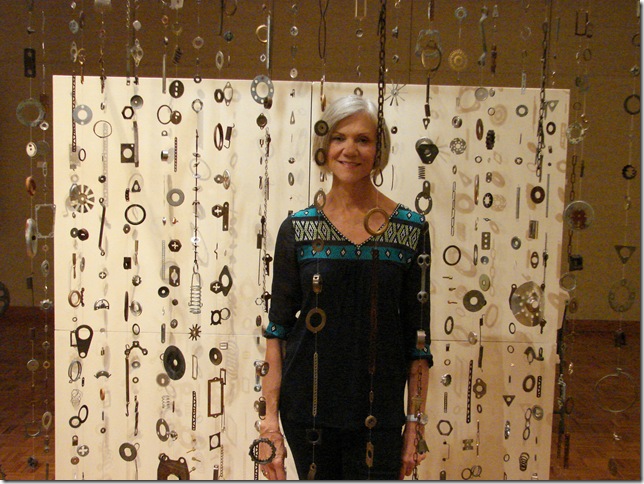 Charm, wit at Walter’s ‘No Boundaries’

An air of delight greets you when you enter No Boundaries, on view in the art gallery at the Eissey campus of Palm Beach State College in Palm Beach Gardens. Artist Karla Walter, the gallery coordinator, has curated a thoughtful, clever and engaging show of 20 works by 10 local artists.

When Walter conceived the exhibit’s theme and handpicked the artists, she had the students in mind.

“I wanted them to see what art is about now,” she said. “So, I was looking for a group of artists that work in a variety of mediums, especially video.”

The result is a diverse array of mixed-media work, including painting, sculpture, installation and video with a unifying theme.

“I gave the artists the freedom to do what they wanted,” Walter said. “I didn’t put boundaries on their work.”

At the center of the gallery, Elayna Toby Singer’s installation, Going Within, hangs from the ceiling. The whimsical work contains singular strands of more than 1,000 found and acquired auto parts and other metal shapes, primarily circular, that cascade to the floor. The viewer can walk inside the piece and experience Singer’s vision, spelled out in her artist statement: “Just as our sense of self and connection to others changes over time, so too will this installation when individual strands are sold and removed.”

Another immersive experience can be found in a video work, La Mer, by Cheryl Maeder, a friend of mine. Don the headphones hanging next to the screen and prepare for a lulling experience, as the sound of gently crashing waves draws you in. Like all of Maeder’s work, La Mer is very affirming and emanates a positive aura, much like the artist.

It’s hard not to laugh out loud when you read the text in David Willison’s Laundry, which depicts two pages from a book placed alongside each other, one an image and the other text. Willison, who teaches at the Lighthouse ArtCenter Museum and School of Art in Jupiter, views himself as a conceptual artist.

Walter described him as shy, but this work, and two others, reveal a rich inner world. He explained in his artist statement, “Art is a vehicle to understand ourselves and our surroundings, and too often artists use it as a blunt instrument for sales or a simple expression of beauty.”

No danger of that in Walter’s show, as all the work is on par with the depth of Willison’s. Other featured artists, including Sibel Kocabasi, Jackie Tufford and Sam Perry, are among the county’s most noteworthy.

No Boundaries is on view until Oct. 11. The art gallery is in Building BB on the college’s campus at 3160 PGA Blvd, in Palm Beach Gardens. Hours are 9 a.m. to 5 p.m. Mondays, Wednesdays, Thursdays and Fridays. For information, call 561-207-5015 or visit www.palmbeachstate.edu/artgallerypbg. 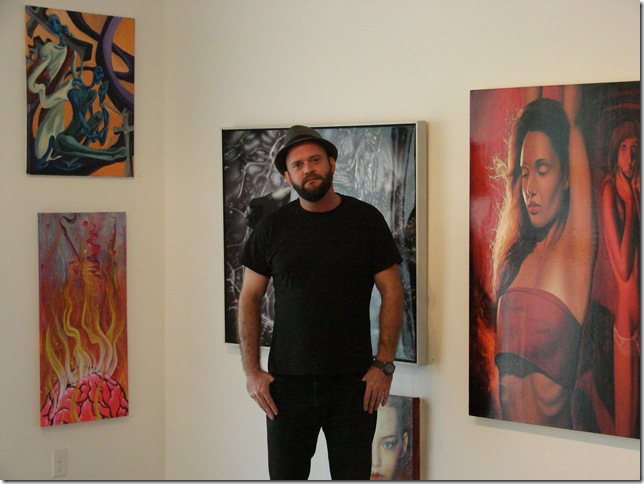 Downtown Lake Worth gets taste of the L.A. Scene

Let’s face it: As of overnight, Lake Worth has become a hip cultural hub, and Jacques de Beaufort, an associate professor of art at Palm Beach State College, is one of the reasons why.

De Beaufort is part of a small cadre of working artists who live in the city’s new Urban Art Lofts. When he moved in, the former Los Angeles resident brought that alluringly laid-back — yet concurrently cutting-edge — West Coast attitude that’s creating a buzz. He converted the ground-floor studio of his duplex apartment into an art gallery called Unit 1, and it’s quickly become one of the county’s most unique venues for avant-garde art. One of the reasons is that it’s more than a gallery; it’s a place for live concerts, film shoots and other happening events. And he wants everyone to know he’s open to other suggestions.

The small, white space with its polished cement floors was crammed with the more than 100 attendees coming and going during the recent opening of The Invisible Horde. The show contains diverse work by 30 local artists. On the lawn in front of the gallery, Alexander Krivosheiw’s mammoth aluminum-welded sculpture Calliope greeted guests. The work was striking, both because of the obvious technical skill that went into its construction and the graceful way the shape evoked movement.
Serving as a barometer of viewers’ coolness, Shelly J. Cox’s oil painting, A Painters Problem, raised many an eyebrow. The painting is a spoof of Norman Rockwell and shows a woman from the 1940s being, for lack of a more appropriate word, serviced by the mailman. Cox uses the alias Norma Cockwell.

A goal de Beaufort had was to cultivate a sense of community among the artists included, and he achieved it. In reference to the show’s title, he explained, “You’ve got all these artists in the county working individually in their studios, and I wanted a way to bring them together.”

Film: Playwright August Wilson began his chronicle of the African-American experience throughout the … END_OF_DOCUMENT_TOKEN_TO_BE_REPLACED

Film: Just in time with the opening of movie theaters in Palm Beach County comes the season’s most … END_OF_DOCUMENT_TOKEN_TO_BE_REPLACED

Music: The very last concert Franz Joseph Haydn attended in his life was in March 1808, about a year … END_OF_DOCUMENT_TOKEN_TO_BE_REPLACED