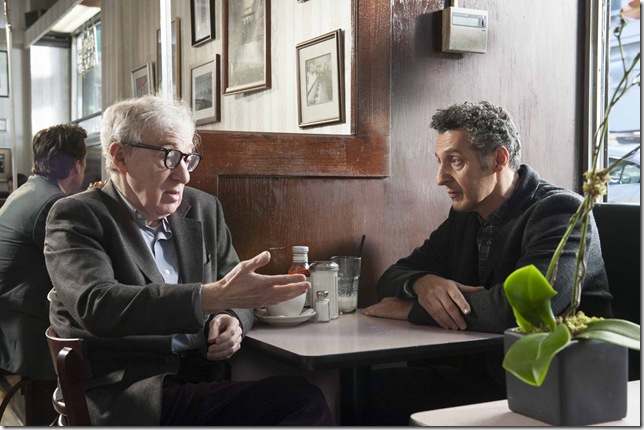 As the fading gigolo in Fading Gigolo, John Turturro plays a convincing enough stud — gaunt, laconic and mysterious, with a magnetism that belies both his looks and age. His character, whose real name is never mentioned, is a worldly florist with a reputable track record as a lover who is talked into the world’s oldest profession by his strange old buddy Murray (Woody Allen), a struggling rare-books salesman. Murray becomes the pimp to his Lothario, benefiting both of their bank accounts until love, and the law, complicate things.

The movie looks like the faded tomes that line the shelves of its partners-in-sex-crime: musty, beige and mothballed. It’s set in an artificially quaint Williamsburg, Brooklyn, that’s conspicuously devoid of hipsters, and where its characters still track their bank transactions on physical ledgers and speak on 10-year-old cellphones.

But at least its decorative anachronisms are consistent; the script and direction, both provided by Turturro, are tonally scatterbrained, and the longer you sit with Fading Gigolo, you realize that you’re watching at least three, if not four, different movies jostling for Darwinian dominance.

First of all, there’s the sex comedy about Turturro’s amateur lover, who calls himself Virgil, charging a thousand dollars a pop to bed the likes of Sharon Stone (as a dermatologist bored with her moneyed husband) and Sofia Vergara (as her sexually adventurous friend and proposed ménage à trois partner) — an implausible male fantasy realized only through Turturro’s uniquely compelling performance.

Then there’s the serious and unexpected foray into the world of Hasidic Jews, in which an Orthodox community watchman, played by a sidelocks-donning Liev Schreiber, discovers that something might be amiss while pursuing one of Virgil’s clients — a widowed Hasid named Avigal (Vanessa Paradis) whose meetings with Virgil reawaken passion that has been dormant, and forbidden, since her husband’s passing. There’s a lot of promise and sunlight in Paradis’ gap-toothed smile, and her encounters with Turturro are beautiful — the best scenes in the film.

And you can’t leave out the deadpan Woody Allen movie enclosed within Turturro’s film like a Russian doll. Murray is Broadway Danny Rose by any another name, selling a male hooker instead of singers and plate-spinners, and speaking with the same nebbish Catskills delivery Allen has trademarked for half a century. His persona subsumes the action so much that it’s hard to believe he didn’t ad-lib most of his dialogue — which is an asset when he’s funny but perhaps a liability when he steals the personality from Turturro’s own signature style of offbeat romanticism.

But the movie that ultimately wins in this stylistic hybrid is that of the awkward farce, epitomized by the Keystone Kops-like blundering of Schreiber and his crack squad of community watchmen, a silly quasi-arrest of Murray, and an embarrassingly caricatured scene in a Jewish courtroom, over which wizened judges preside, their words swallowed by their obtrusive beards. Everything afterward collapses into a soup of silliness and head-shaking improbability, of decisions made not because of narrative logic but seemingly because Turturro ran out of time and a budget. Like its fading protagonist, the movie never achieves clarity.

Film: Playwright August Wilson began his chronicle of the African-American experience throughout the … END_OF_DOCUMENT_TOKEN_TO_BE_REPLACED

Film: Just in time with the opening of movie theaters in Palm Beach County comes the season’s most … END_OF_DOCUMENT_TOKEN_TO_BE_REPLACED

Music: The very last concert Franz Joseph Haydn attended in his life was in March 1808, about a year … END_OF_DOCUMENT_TOKEN_TO_BE_REPLACED