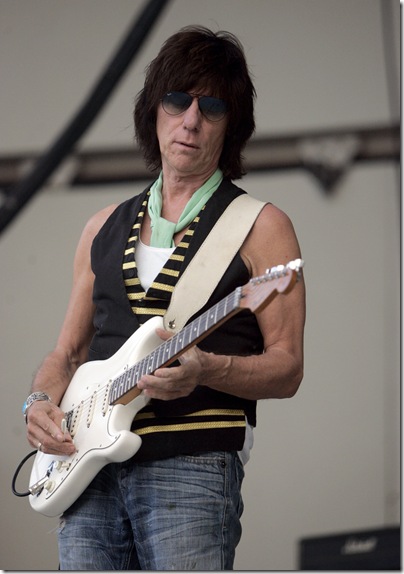 Set to turn 67 next month, Jeff Beck is one of three famed British lead guitarists who played with 1960s pop/rock group the Yardbirds, the others being Eric Clapton and Jimmy Page.

And each followed that stint by diving into heavy blues-rock: Clapton with Cream; Page with Led Zeppelin, and Beck with his self-titled group.

But while Clapton left Cream to pursue simpler pop material as a solo artist, and Page ventured further into rhythmic complexity with Zeppelin, it was still Beck who went the furthest outside the box. His 1975 instrumental jazz/fusion gem Blow By Blow, produced by former Beatles engineering guru George Martin, started a trend of unexpected career moves that continues 36 years later.

Yet Beck played a surprisingly cover-heavy and nostalgic set on Sunday at the Tire Kingdom Stage of SunFest, avoiding material from his latest release, the progressive 2010 Grammy winner Emotion & Commotion. The muddy sound at the Meyer Ampitheatre seemed to rankle the guitarist, who concluded the proceedings after only 75 minutes.

Beck’s quartet included longtime keyboardist Jason Rebello, bassist/vocalist Rhonda Smith (an alum of Prince’s band) and drummer/vocalist Narada Michael Walden. It was Walden who played on Beck’s 1976 release Wired, the Blow By Blow follow-up that equaled its predecessor while adding muscle tone. The drummer’s shimmering intro to Led Boots, the opening track on Wired, led to an early highlight as its stops and starts got the capacity crowd involved.

While Beck’s artistic apex occurred in the 1970s, he mined his sparse 1980s catalog for some mid-set highlights. Smith sat out Where Were You, a ballad from the 1989 release Guitar Shop, which was recorded in a bass-free trio format by Beck, keyboardist Tony Hymas and drumming wiz Terry Bozzio. Walden stood to one side of his massive drum kit to play cymbals with mallets, accenting the lines of Beck and Rebello.

Smith took the spotlight during a solo on an electric upright bass, and donned her primary instrument as Beck introduced her to the crowd to continue in a slap-and-tap showcase. The quartet then downshifted into an instrumental version of Curtis Mayfield’s People Get Ready, which featured banner solos by both Rebello and Beck. The hit remake from the guitarist’s 1985 album Flash actually featured guest vocalist Rod Stewart, singer for the original Jeff Beck Group in the late 1960s.

Beck is known for featuring outstanding female musicians in his bands. His late-1990s touring quartet included Jennifer Batten, a former Michael Jackson guitarist who pushed both bandleaders to greater heights. And youthful Australian bass prodigy Tal Wilkendeld preceded Smith — whose thumping intro to the funky You Never Know (from Beck’s 1980 recording There & Back) led to heated guitar-and-keyboard trades, plus flurries from Walden that were unfortunately washed out within the blanketed sound. The drummer’s thunderous tones from Wired, and the Mahavishnu Orchestra’s 1975 album Visions of the Emerald Beyond, were stunted here.

On Muddy Waters’ blues standard Rollin’ and Tumblin’, Smith sang lead, delivering a growling, overwrought vocal that the audience nevertheless ate up. Jimi Hendrix’s Little Wing then featured Walden on lead vocal, but Beck stole the thunder. Clearly warming up, his unorthodox, finger-picked soloing echoed not only Hendrix, but other mentors from Les Paul to Roy Buchanan.

Yet that was the point where something else happened to annoy Beck. At 7:45 p.m., he could clearly hear Earth, Wind & Fire start up at the Bank of America Stage to the north, which was as overly loud as the Tire Kingdom Stage was muffled.

“I hope we don’t get drowned out here,” Beck said before launching into Blue Wind, another track from Wired. Rebello played inspired solos that echoed the original album playing of Jan Hammer, holding his own in a point-counterpoint session with the iconic guitarist.

All of which led to the set-closing Beatles cover A Day in the Life, which was one of the high points in Beck’s career-resurgent 2008 DVD Performing This Week….Live at Ronnie Scott’s (with Rebello, Wilkenfeld and yet another great drummer, Vinnie Colaiuta). As the dynamics of Rebello, Smith and Walden ebbed and flowed, Beck mimicked the original vocal melody with otherworldly touch, feel and precision.

The encore was an anticlimactic cover of Sly & the Family Stone’s I Want To Take You Higher, sung by Walden and Smith. Rebello again provided fiery soloing, but Beck looked like he couldn’t wait to get off the stage from the moment he appeared to play the unaccompanied opening riff.

SunFest’s southernmost FPL Stage faces north, and backs up against Okeechobee Boulevard, far away from the other two stages. The Tire Kingdom Stage at the Meyer Ampitheatre also faces north, and is an immobile concrete structure between Datura and Evernia streets. Yet the Bank of America Stage actually faces south on Clematis Street, less than three blocks away from the Meyer.

Beck is known for the emotion in his playing, but commotion like this can also bring it out through his temper. Perhaps it’s time to aim the mobile northernmost stage in a different direction, or at least pump down the volume, so that he might come back when he can stay longer. The multi-Grammy winner and Rock and Roll Hall of Fame inductee deserved better, and so did his audience.

Film: Playwright August Wilson began his chronicle of the African-American experience throughout the … END_OF_DOCUMENT_TOKEN_TO_BE_REPLACED

Film: Just in time with the opening of movie theaters in Palm Beach County comes the season’s most … END_OF_DOCUMENT_TOKEN_TO_BE_REPLACED

Music: The very last concert Franz Joseph Haydn attended in his life was in March 1808, about a year … END_OF_DOCUMENT_TOKEN_TO_BE_REPLACED