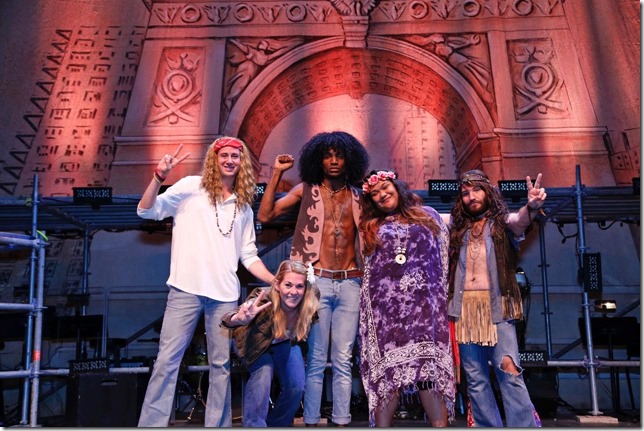 Some musicals are timeless, while others are time capsules which transport us back to a specific period. An example of the latter is Hair, the “American tribal love-rock musical” which captures the psychedelic, flower power 1960s.

It first arrived on Broadway in 1968, as the Vietnam War was raging and dividing the country. The show, one of the first musicals to feature rock music, was very specific to its time, and yet it has appeal today, albeit largely nostalgic.

Most of the audience at the Kravis Center’s Rinker Playhouse, where director-choreographer KD Smith and MNM Productions are giving Hair a spirited revival, surely remembers the Sixties. On the other hand, for the young, energetic cast members — who look like they can barely recall the Clinton administration — the show is ancient history. Still, Smith succeeds at turning them into a credible counterculture tribe from those tumultuous, hairy days.

When the show was new, the four-letter-word-filled score by those young upstarts Galt MacDermot, Gerome Ragni and James Rado had its shock value. Hearing such songs as “Aquarius,” “Good Morning, Starshine” and “Let The Sunshine In” now, they seem like aural comfort food for the Baby Boomer generation.

The narrative was never the show’s strong suit, centering as it does around character sketches of the tribe members and particularly Anglophile Claude Hooper Bukowski, conflicted over what to do about his newly arrived draft notice. Smith manages to bring a refreshing clarity to the show through her staging, notably during Claude’s drug-induced second-act hallucination sequence. Many of the company members are making their professional debuts, but they sing with power and Smith even gets them dancing with her simple, effective crowd choreography. (In a cast of non-dancers, Emily Tarallo is a distinct standout.)

And while far too much was made of the first-act finale’s full frontal nudity originally, it has become part of the lore of Hair that would be notable if absent. So yes, the cast does doff its duds briefly, and in brighter light than usual. If that is why you attend Hair, you will probably also enjoy the simulated sex acts as well, all of which seems surprisingly innocent.

Heading the cast are a couple of Equity ringers — lanky Michael Scott Ross as Claude and impish, hirsute Mike Westrich as his sidekick Berger. Other standouts include Nicole Kinzel as pregnant Jeanie, Shenise Nunez (Crissy), who charms with that self-contained tribute to naivete, Frank Mills, and Elijah Word, an imposing presence even without his oversized Afro.

Musical director Paul Reekie and his six-member band serve up the score with great verve. Cindy Taylor’s scaffolding scenic design is simple but effective, aided substantially by Jayson Tomasheski’s psychedelic lighting design. If you are understandably in denial over the current state of politics, MNM’s Hair affords a groovy opportunity to escape to the ʼ60s.

Film: Playwright August Wilson began his chronicle of the African-American experience throughout the … END_OF_DOCUMENT_TOKEN_TO_BE_REPLACED

Film: Just in time with the opening of movie theaters in Palm Beach County comes the season’s most … END_OF_DOCUMENT_TOKEN_TO_BE_REPLACED

Music: The very last concert Franz Joseph Haydn attended in his life was in March 1808, about a year … END_OF_DOCUMENT_TOKEN_TO_BE_REPLACED