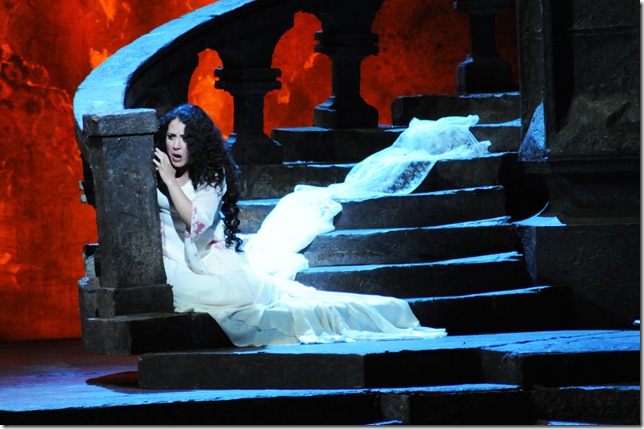 With its final production of the season, Palm Beach Opera showcases a number of fine voices in a handsome, traditional presentation that drags somewhat but ultimately comes off in dramatic and satisfying style.

Donizetti’s Lucia di Lammermoor, which the company last performed in 2003, requires a strong central soprano, and in the Mexican singer Maria Alejandres, Palm Beach Opera has an artist of substantial gifts whose powerful, mature voice should stand her well in her future career.

Alejandres has a very attractive dark quality to her singing that added pathos to her interpretation of the role, and that could be heard fully in her Act I Regnava del silenzio. Here, her voice sounded strong and easeful, and she also displayed a thorough technique, handling the leaps and display work of the aria with confidence and no sign of strain.

This was true in all of her arias and ensemble work, and it was only in the final act that the terminal display notes a fifth above the tonic started to show some fatigue, two or three of them coming in just under pitch. Stage director Massimo Gasparon’s conservative staging didn’t give her a lot of room to show her acting chops until the mad scene, in which she was very effective. It was particularly good in the middle, as she sang of getting ready for her wedding, framing her head with her bloody gown and moving among the crowd with the only sign of lighthearted happiness she ever gets to show.

Her singing was quite good in the scene, especially in her lockstep with the solo flute, and while her final note was slightly ragged, she handled this difficult singing and acting assignment compellingly, and it was a pleasure to see. 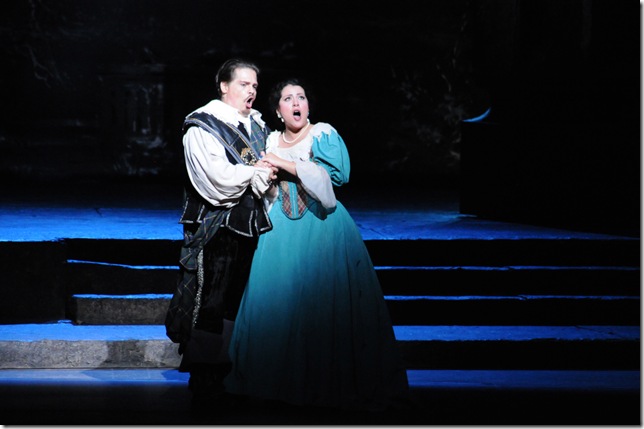 Her Edgardo, the Brazilian tenor Fernando Portari, was well-cast for the distinctively different sound of his voice from the rest of the ensemble. It’s a bright-toned, creamy lyric tenor, well-suited for this impetuous role, and he turned out to have plenty of stamina. His finest singing, indeed, came in the very last scene, especially his second aria (Tu che a Dio spiegasti), which sounded truly heartfelt, and was shaped with real poignancy and loveliness. No doubt he makes a fine Alfredo and Rodolfo, too.

The other principals also were excellent. Baritone Roman Burdenko was a very fine Enrico, with a virile, flexible voice in which the character’s menace and ambition could be clearly felt. This is a large role, but such an unsympathetic one that the singer who performs it rarely gets enough credit for carrying it off. But Burdenko was a rock, and in his solo arias (Cruda, funesta smania) and his duet work with Alejandres, he showed off a voice of considerable, impressive quality.

The American bass-baritone Alfred Walker was a first-class Raimondo, too, with great stage presence and a voice, especially in Act II’s Ah, cedi, cedi, that was rich and honeyed. His lower register has more weight than his upper; in the higher reaches he tended to lose a little power, but it scarcely mattered. Like the other principals he was a credit to his teachers, with a really fine technique that enabled him and the whole cast to tackle some often extravagant music and bring it thoroughly under control.

The three Young Artists members of the cast – tenor Evanivaldo Correa as Arturo, baritone Kenneth Stavert singing the tenor role of Normanno, and mezzo Shirin Eskandani as Alisa – were quite capable, though somewhat overmatched by the other voices. Correa perhaps came off best, with a short role that’s well-matched to his tense spinto.

This production, rented from the Dallas Opera, looked beautiful, especially Peter J. Hall’s costumes, which were splendid in their 17th-century Cavalier glory, and Henry Bardon’s opening scene in the park came right out of the ruined-building school of the Old Masters. It took rather a long time between scenes for scene changes, which interrupted the flow and made for a longer evening; perhaps in the future some covering music might be appropriate (Donizetti wrote a great deal of instrumental music that could be used as filler, though that perhaps would be a blot on the musical unity of the production).

Conductor Bruno Aprea had a very good orchestra to work with, most crucially the horns, which Donizetti uses constantly, and who only suffered one tiny clam in the whole evening of exposed instrumentation. His tempos were rather slow in the first act, which stretched things out, and then somewhat too hasty in the Per te d’immense giubilo for the chorus and the much-beloved sextet (Chi mi frena in tal momento), both in Act II.

But overall, his conducting was an object lesson in how to accompany singers. The chorus and orchestra in the opening had a debate about where the tempo was for a minute or two, but for the rest of it, Aprea handled his forces and supported his singers with exceptional delicacy, always moving with them and making sure to keep the music sounding as natural, and as fluid, as possible. That not only made things work as a drama, it also helped shed light on the skill of Donizetti’s orchestration. 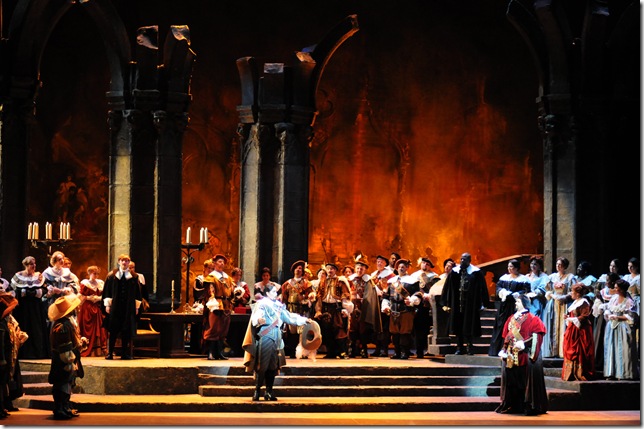 The company chorus sang ably throughout, were nicely drilled and generally forceful. The men alone were a little weaker, particularly in the last scene as they tell Edgardo that Lucia has been asking for him while she lies dying.

The scene changes and the too-deliberate pace of Act I make this a rather long night at the theater, but it’s a good-looking, solid production, and a commendable note on which the Palm Beach Opera to end its 50th year.

Lucia di Lammermoor will be presented tonight at 7:30 tonight and at 2 p.m. Sunday. Tonight’s cast features Valentina Farcas as Lucia and Georgy Vasiliev as Edgardo; Alejandres and Portari return Sunday afternoon. Performances are at the Kravis Center; tickets start at $20. Call 833-7888 or visit www.pbopera.org; alternatively, you can call the Kravis at 832-7469 or visit www.kravis.org.

The opera’s 51st season will include performances of Verdi’s La Traviata in January, Rossini’s La Cenerentola in February (with Vivica Genaux in the title role), and Richard Strauss’ Salome in March. In April 2013, the Young Artists troupe will present two performances of Britten’s Turn of the Screw at the Wold Performing Arts Center in Boca Raton.

Music: The very last concert Franz Joseph Haydn attended in his life was in March 1808, about a year … END_OF_DOCUMENT_TOKEN_TO_BE_REPLACED

Film: Major League Baseball culminates each season with the World Series, but to find the true … END_OF_DOCUMENT_TOKEN_TO_BE_REPLACED