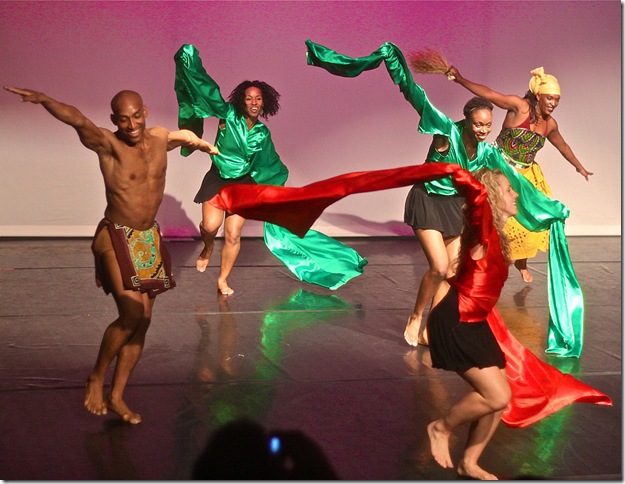 A scene from Global Village, choreographed by Lula Washington. (Photo by Eric McGinnis)

Could there have been a better way to start off the Lula Washington Dance Theatre’s show at the Rinker Theatre on Jan. 22 than with Michael Tomlin III tipping the brim of his hat to us and proceeding to dance to the music of Terence Blanchard?

It wasn’t long before he had the entire audience in the palm of his hand as he cleanly moved his chiseled body through The Arrival, the opening selection of Random Thoughts, choreographed by Lula Washington. For the entire evening, it was hard to take your eyes off Tomlin. His compact energy and his enormous physical control with its subtleties in movement nuances were addictive.

The work scheduled to be first on the program, Love is… by Christopher Huggins, was not performed due to dancer injury. It was unfortunate as Huggins, a former member of Alvin Ailey American Dance Theater, is a new name to get to know as a choreographer.

Gun violence was brought to the forefront by Tamica Washington-Miller (Lula Washington’s daughter) in her actor/dancer role as the mother figure in Search for Humanism. With a deep, clear emotion, she reiterated the phrase “stop killing my babies” while forcefully hitting the floor with a long stick while framed in a single, harsh spotlight.

Choreographed in 2015 by Washington, the work continued with a young man in a hoodie who made graffitti signs in the air before anxiously starting his solo. There was a dramatic ending with a group of people gasping as their voices crescendoed in grief. “I can’t breathe!” and “no” filled the air after gunshots were heard.

In another work, Global Village, Washington used the music of the Nigerian musician Fela to create a celebratory dance. She used various dance styles from around the world to show that African people have made imprints the world over.

Washington-Miller took the role of choreographer in a rather sophomoric work called Beautiful Venus and Serena. Four women (Tehran Dixon, Krystal Hicks, Tashara Garvin-Moorehead and Haniyyah Muhammad) gave it all they had as they tromped and sparred around the stage dressed in tennis whites and swinging their racquets in mock forehands and backhands strokes.

The company as a whole looked its best in Reign, which closed the show. With a spiffy color-changing gobo on the cyclorama and the remix music of James “JT” Wilconson, the gears immediately switched as the look became sleek and ultra-urban with a smattering of evangelical spirituality thrown in.

Reign was choreographed in 2010 by hip-hop artist Rennie Harris, who is single-handedly responsible for taking the dance form of hip-hop into the concert hall. It was just three years ago that his wonderful company, Rennie Harris Puremovement, performed at the Rinker.

In this work, Harris successfully combined his hip-hop vocabulary with a revivalist mood à la Alvin Ailey complete with fanning hand gestures and a voice preaching “He reigns” on the soundtrack. The Lula Washington Dance Theatre company dancers were energetic and personable throughout the program but here in Reign, they looked more adept and polished in the fast pace of Harris’ engaging choreography.

Film: Playwright August Wilson began his chronicle of the African-American experience throughout the … END_OF_DOCUMENT_TOKEN_TO_BE_REPLACED

Film: Just in time with the opening of movie theaters in Palm Beach County comes the season’s most … END_OF_DOCUMENT_TOKEN_TO_BE_REPLACED

Music: The very last concert Franz Joseph Haydn attended in his life was in March 1808, about a year … END_OF_DOCUMENT_TOKEN_TO_BE_REPLACED