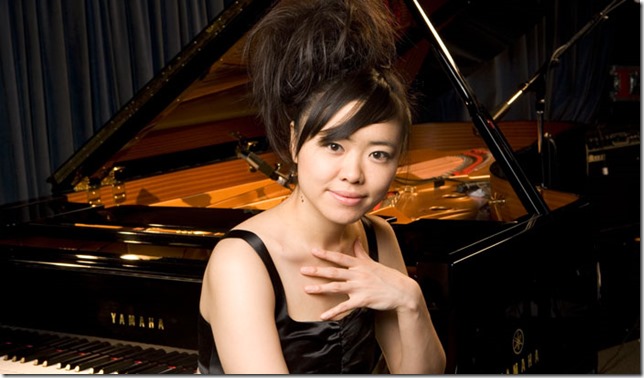 Japan native Hiromi Uehara has gained first-name recognition worldwide since moving to the United States to attend the Berklee College of Music in 1999.

The 37-year-old pianist’s recording and touring career began a few years later, and has essentially been split between her 2004-2009 trio with fellow Berklee grads Tony Grey (bass) and Martin Valihora (drums), augmented with the occasional addition of guitarist David Fiuczynski to create her Sonicbloom quartet, and subsequently her 2010-present Trio Project with veteran all-star partners Anthony Jackson (bass) and Simon Phillips (drums).

The 63-year-old Jackson’s credits range from jazz/fusion (Chick Corea, Al Di Meola) to popular music (Steely Dan, Paul Simon), as do the 59-year-old Phillips’ (Jeff Beck to Pete Townshend to Toto). Yet this decorated trio — perhaps as a victim of its own expected success — has proven more hit-and-miss than Hiromi’s preceding incendiary, unpredictable unit.

The current group’s first two studio releases, Voice (2011) and Move (2012), lacked the chemistry and consistency of Hiromi’s initial touring trio, and particularly her outside-thinking Sonicbloom band. In concert, however, the current veteran rhythm section has proven formidable, as documented on the 2011 Trio Project DVD Live in Marciac.

On Tuesday, that lineup again proved its mettle during an eight-song, 80-minute romp to a three-quarter-capacity crowd at Broward College’s Bailey Hall in Davie, all while almost exclusively playing material from Hiromi’s freshly-released 10th studio CD, Spark. Her classically infused piano intro on the opening title track led to synthesizer accompaniment as the piece ranged between 9/8, 4/4 and 6/8-timed rhythmic cadences. Hiromi’s extended solo was highly percussive, and seemingly inspired by Phillips, who answered with solos on his over-sized drum kit over a vamp by the pianist and Jackson.

“Player,” from the trio’s superb 2014 CD Alive, de-accelerated things from Jackson’s opening break, in which he used practically all of the frets on the bass neck to segue sections that showcased gospel, swing and blues elements. Hiromi’s extended solo proved combustible, as she transitioned from Thelonious Monk-like spiked chordal work to accelerated, cartoon-like sections. But the piano paid a price.

“I’m sorry, I just broke a piano string,” she said, as a technician performed surgery on the instrument. “It’s my second one today! The first was at our sound-check. This tune is called ‘Take Me Away.’”

The track from Spark proved better live than its studio CD counterpart. Jackson’s expanded range on his six-stringed bass allowed him to play chiming high notes and harmonies with Hiromi, both before and after her soulful, bluesy solo. And Phillips navigated the tune’s 7/8-timed sections by switching between drum sticks and mallets, often playing with one of each.

Hiromi’s infectious energy — which sometimes caused her to stand up and run in place while playing — carried the otherwise downturned midsection of the show, where other tracks from Spark didn’t peak in the middle and carry through to the end like the opening pieces. That trend was broken by “Dilemma,” via a cascading opening feel by the pianist, plus her use of dynamics during a quiet, introspective middle section.

“Wake Up and Dream,” Hiromi’s solo piano piece from Spark, likewise proved more mesmerizing than its studio version. The pianist’s left hand carried the ballad, which Hiromi pulled off as few pianists could by playing a surplus of notes that nonetheless didn’t take away from its introspective melody.

The encore, the final track from Spark, “All’s Well,” was also an improvement. Hiromi introduced the piece with hand claps as she walked around the stage, augmented by Phillips doing the same while playing stick-on-stick and then on the front head of one of his two bass drums. Jackson picked and then finger-picked another tasteful solo, and the brief, bluesy finale left the appreciative crowd wanting more.

If anything, the piano’s 88 keys sometimes seem limiting to Hiromi, whose blend of classical, jazz and popular music ideas and techniques is staggering. Yet her compositional inspiration, with the exception of the Alive recording, hasn’t seemed as focused on recordings with Jackson and Phillips as it was with their younger predecessors.

On stage, however, Hiromi, New York City native Jackson and the London-born Phillips approximate a musical United Nations. The energetic Alive is their most resolute effort yet, largely because it sounded like it was recorded live in the studio. This trio is overdue for an in-concert live CD, which it likely hasn’t made only because those more honest documents don’t sell as well as tracked, overdubbed studio recordings.

Pop and jazz writer Bill Meredith can be reached at billmrdth@gmail.com.

Film: Playwright August Wilson began his chronicle of the African-American experience throughout the … END_OF_DOCUMENT_TOKEN_TO_BE_REPLACED

Film: Just in time with the opening of movie theaters in Palm Beach County comes the season’s most … END_OF_DOCUMENT_TOKEN_TO_BE_REPLACED

Music: The very last concert Franz Joseph Haydn attended in his life was in March 1808, about a year … END_OF_DOCUMENT_TOKEN_TO_BE_REPLACED