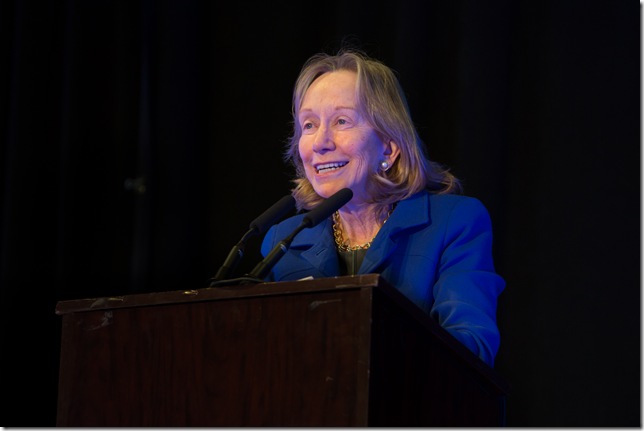 Pulitzer Prize-winning author Doris Kearns Goodwin doesn’t just talk about history. She takes her audience on a word picture journey through time, giving wings to funny facts and deep insight into many of this nation’s presidents.

Her lecture Thursday night at the Mizner Park Amphitheater in Boca Raton, part of Festival of the Arts Boca, touched on her latest book, The Bully Pulpit: Theodore Roosevelt, William Howard Taft, and the Golden Age of Journalism, a 909-page tome that offers plenty of grist about the country’s two turn-of-the-20th century leaders. It includes side trips involving their wives and a new trend in newspaper and magazine writing at the time called “investigative journalism.”

After giving Taft and Teddy their due, she offered the audience, thirsty for more information from the diminutive lady from Concord, Mass., a look back at her involvement in the making of Steven Spielberg’s film, Lincoln, based on Goodwin’s book, Team of Rivals: The Political Genius of Abraham Lincoln, a volume that was 10 years in the making.

“Spielberg made me part of the team,” she told the audience gathered on the chilly March evening, protected only by a large roof. The famed director bought the rights to her book at least five years before she finished it in 2005, she recalled. Goodwin noted that Spielberg “always wanted Daniel-Day Lewis to play the lead role.” And he did – with such intensity, she said, that he remained in character even on the movie set. “No one called him Daniel, because he was Lincoln.”

She helped mold Lewis’ portrayal of the 16th president, taking him to Springfield, Ill., to get a feel for the place Lincoln called home in his adult years. The actor morphed presidential, using a high-toned voice and laborious walk said to have typified the nation’s lanky leader.

Goodwin said she saw an early cut of the movie at Spielberg’s home. “It was like Lincoln coming to life.”

The avid historian, once a professor at Harvard who gave that up to raise her kids, delighted the rapt audience with tales from her Taft and Teddy book. “They were both young reformers when they met,” she said. “Over time, they began to rely on one another. They exchanged more than 400 letters.” 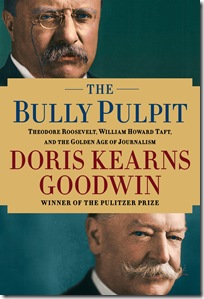 “The pair could not have been any more dissimilar,” she noted. Roosevelt, born sickly, spent his life working on his health until, as president, “he could walk 20 miles a day or ride a horse 50 miles a day.”

Taft, she said, was robust in his youth, but let his body deteriorate. His adult weight wavered between 250 and 350 pounds. Unlike Roosevelt, who adhered to a strict schedule, Taft was a procrastinator, the prize-winning historian said. Also, the chubby president “didn’t have Roosevelt’s capacity for speeches.”

“Though the two men had strikingly different temperaments,” she noted, “together, they would fundamentally enlarge the bounds of economic opportunity and social justice.”

Their wives were equally dissimilar. Edith Roosevelt, literary and reclusive, helped rein in her impetuous husband. The politically astute Nellie Taft was the goad for her introspective, introverted hubby.

Others in the McClure magazine bloc also plied their journalistic freedom. “Lincoln Steffens toppled many politicians,” Goodwin noted. William Allen White was a renowned newspaper editor, politician and author who became the voice of Middle America. Ray Stannard Baker reported on turmoil in the labor unions.

When Taft succeeded Roosevelt as president, the nation lost the bluster and political confidence of the former “Rough Rider.” Goodwin said Taft didn’t have the speech or leadership skills that Roosevelt brought — and he knew it. Gone, also, were the days of reformist politicians working in tandem with crusading journalists.

Something of a crusading journalist herself, Goodwin said she launched her career in 1967 as a White House Fellow during the Lyndon Johnson administration; she later joined his staff. She has written about LBJ, John F. Kennedy and his family and Franklin and Eleanor Roosevelt, among others. A Boston Red Sox fan, she consulted on and appeared in Ken Burns’ 1994 documentary, Baseball.

Film: Playwright August Wilson began his chronicle of the African-American experience throughout the … END_OF_DOCUMENT_TOKEN_TO_BE_REPLACED

Film: Just in time with the opening of movie theaters in Palm Beach County comes the season’s most … END_OF_DOCUMENT_TOKEN_TO_BE_REPLACED

Music: The very last concert Franz Joseph Haydn attended in his life was in March 1808, about a year … END_OF_DOCUMENT_TOKEN_TO_BE_REPLACED