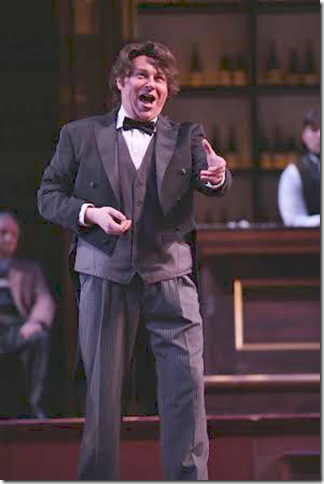 Jacques Offenbach made and lost several fortunes in the course of turning out about 100 operettas for the French stage, but he wanted to write at least one serious grand opera that would show the world that he had more than frivolity up his sleeves.

It was during the composition of that long hoped-for piece, Les Contes d’Hoffmann (The Tales of Hoffmann) that he became seriously ill, and died in 1880 of heart failure with his ambitious opera incomplete. Other hands finished it, orchestrated it, and reassembled it for performance, but despite that multiplicity of fathers it has retained its popularity for more than a century.

And there are good reasons for that, says Jay Lesenger.

“It’s a lot of fun, the music is great, and it’s certainly a very animated piece,” said Lesenger, who heads the Chautauqua Opera in upstate New York and his making his company debut as a stage director. “But it’s mostly that the tunes are so good.”

Starting tonight, the Palm Beach Opera closes its 52nd season with The Tales of Hoffmann, a work that has become famous particularly for its Barcarolle (O belle nuit, o nuit d’amour), but also for its unusual four-in-one story, one that allows productions to treat each act with a different flavor and emphasis.

Based on stories by the German Romantic writer and composer E.T.A. Hoffmann, the story concerns the poet Hoffmann, a man frequently disappointed in love who is aided by his friend Nicklausse (secretly his Muse, in disguise), and opposed by an evil force who appears as four different villains in the prologue and three acts that follow. 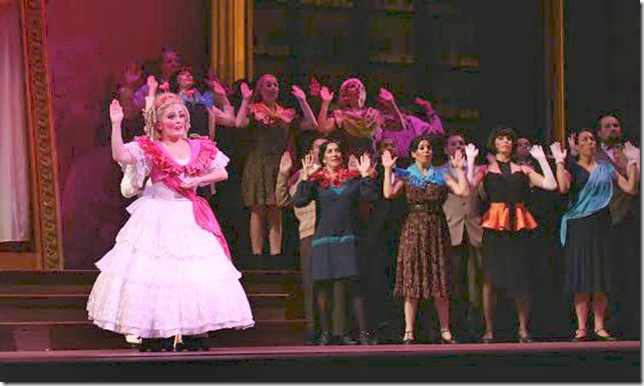 In the first act, Hoffmann falls in love with Olympia, who is actually a life-sized automaton; in the second, with the aspirant singer Antonia, forbidden to sing because it will kill her; and in the third, with a Venetian courtesan named Giulietta. All of these loves are thwarted by the evil force — Coppélius, Dr. Miracle and Dappertutto, respectively – and in the epilogue, Hoffmann, drunk and despairing as the villain Lindorf steals away his latest love, Stella, is urged by the Muse to forget about romance and think of his real vocation, literature.

Lesenger, who has been artistic director at Chautauqua since 1995, has staged about 200 operas in his 35-year career, including important revivals of John Corigliano’s The Ghosts of Versailles and Douglas Moore’s The Ballad of Baby Doe. He’s directed Hoffmann several times before, and will be able to use many of his ideas in the Palm Beach Opera production, which borrows its set from one designed for Virginia Opera.

“In the Olympia act, I have her on roller skates, so there’s something fun going on there, and the whole style is much broader,” Lesenger said. “The Antonia act is verisitic in its style and kind of physically over the top, in the right way; and the Giulietta act has a French hyper-Romanticism. There’s much more sensuality to it.

“I think hyper-theatricality is the way to go with it. I don’t think you want to be subtle with this opera,” he said. This production moves the action up to the 1920s, so that the prologue, for example, is set in a cabaret rather than a rathskeller, Lesenger said. 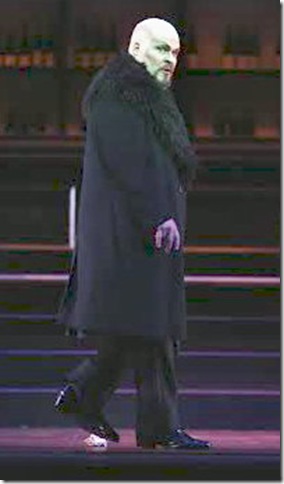 The four villains are played by the fine American bass-baritone Mark Delavan, celebrated for his work as Wotan in Wagner’s Ring cycle at the Metropolitan Opera last season and the Deutsche Oper Berlin in the current season. Hoffmann will be sung by the American tenor Christopher Bengochea, last seen here as Rodolfo in the 2009 production of Puccini’s La Bohème; he replaces the original Hoffmann, Giuseppe Filianoti, who was “unable to perform the services required,” according to the company.

His Muse will be sung by the California-born mezzo Irene Roberts, returning to Palm Beach, where she was a member of the Young Artists program and appeared as Emilia in Otello and Suzuki in Madame Butterfly. Olympia will be sung by the American soprano Ashley Emerson, Antonia by the Greek soprano Eleni Calenos, and Giulietta by Keri Alkema, a native of Palm Beach County. The musical director for the production is the American conductor Christian Knapp.

Alkema, who was born in Palm Beach Gardens, grew up on Singer Island and went to the Benjamin School and Jupiter High School. She also did her collegiate training in Florida, first at the University of Florida, and then at Florida State University.

After college she joined the young artists’ program at the Washington National Opera, and followed that with young artist work at the Santa Fe Opera and at the Music Academy of the West, where her mentor was the eminent American mezzo Marilyn Horne, who remains a close friend.

Alkema began her career as a mezzo, but after meeting with the noted impresario Matthew Epstein and the director Christopher Alden, she switched to soprano roles, beginning in late 2009 with a highly acclaimed Donna Elvira in Alden’s New York City Opera production of Mozart’s Don Giovanni.

“That show was such a hit that it opened a million audition doors for me,” she said. “I switched: I got with a big management company, I got with a teacher who taught me how to nail the top (register), and I’ve been working ever since.”

As a mezzo, Alkema sang roles including a Rosina in Rossini’s Barber for Sarasota Opera, and Erika in Samuel Barber’s Vanessa for Chautauqua. Her soprano roles have included a Mimi in Puccini’s Bohème for Glyndebourne, a Fiordiligi in Mozart’s Cosí fan Tutte for Atlanta Opera, and major roles at New York City Opera including Almatea in Rossini’s Mosé in Egitto. She made her debut with Austin Lyric Opera last November as Elisabetta in Verdi’s Don Carlo.

Alkema sang Giulietta recently for the Canadian Opera Company in Toronto, which she calls an “awesome” experience, and when the original Giulietta that had been engaged in Palm Beach bowed out, she leaped at the chance to do it and come home. 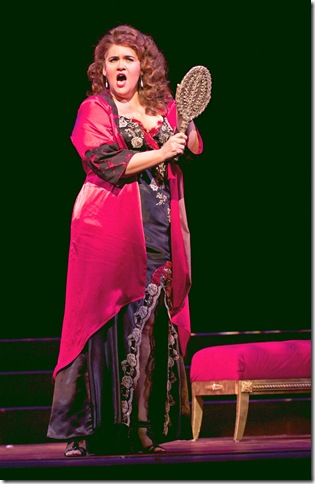 Hoffmann’s structure as a series of short stories makes it appealing for the singers who take on the female roles, she said.

“What’s interesting about these women is that there is a beginning and an ending to their story,” Alkema said. “There is an arc, there is a way to tell who she is and what she’s about.”

Giulietta is a Venetian courtesan, who, lured by Dappertutto’s promise of a diamond, makes Hoffmann fall in love with her so she can steal his reflection.

“You see her winning him over by showing him a vulnerable side of her which he thinks is real, which the audience will hopefully think is real, but at the end of that you see that she really is truly evil. That was all fake,” she said.

Married to Chris Jaffe, owner of a small computer software company, Alkema last summer bought a house in Fernandina Beach for her home base, but says she hasn’t been able to spend much time there yet. Right after Hoffmann, she’s headed to France to sing Jane Seymour in Donizetti’s Anna Bolena for the Bordeaux National Opera, and in August, she’s off to Chile to sing Desdemona in Verdi’s Otello for Santiago’s Teatro Municipal. Future roles include her first appearances as two major Puccini heroines, Tosca and Butterfly.

The demise last year of New York City Opera, where both Lesenger and Alkema have worked, raised alarms among the cultural cognoscenti about the continued viability of opera as an art form. But while acknowledging the financial issues faced by opera (and all of the fine arts), neither sees any reason to be pessimistic about its future. 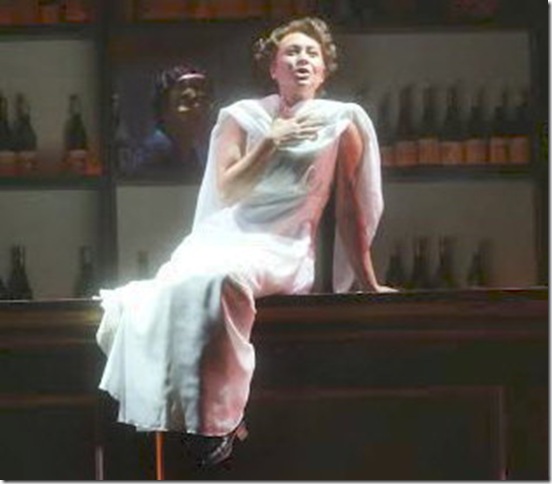 “I just got a call for 2018, so no, I don’t think opera’s dying. It’s definitely changing, but I don’t think it’s dying,” Alkema said, adding that tough times have forced companies to innovate, and to do so with success. Examples include “pop-up” operas of engaging repertoire in unusual places such as bars in art districts. “It’s actually turning out to be a happening thing to do. What’s also very cool is that I don’t think opera is just for the elite anymore.”

Lesenger noted that opera is unique in that it is a throwback to a time when people sang without electronic assistance.

“We are the last vocally acoustic thing you can go to hear. You cannot hear the human voice unamplified anywhere else anymore. Even when you go to a club and hear a singer, and there’s 40 people there, you still have a microphone,” he said.

Also, opera provides a good communal theater experience that pays off an audience member’s investment of his or her time.

“Opera takes time, and we shouldn’t apologize for that. I don’t think it’s such a terrible thing to sit in a theater for 2 and half, three hours, and turn the computer off,” Lesenger said. “And I do think that even people who are afraid of opera, if you can get them through the door, they’re inevitably surprised by how much they like it.”

Film: Playwright August Wilson began his chronicle of the African-American experience throughout the … END_OF_DOCUMENT_TOKEN_TO_BE_REPLACED

Film: Just in time with the opening of movie theaters in Palm Beach County comes the season’s most … END_OF_DOCUMENT_TOKEN_TO_BE_REPLACED

Music: The very last concert Franz Joseph Haydn attended in his life was in March 1808, about a year … END_OF_DOCUMENT_TOKEN_TO_BE_REPLACED