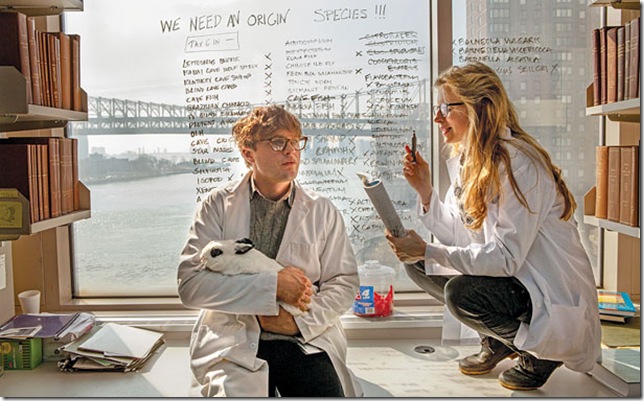 Mike Cahill and Brit Marling make science-fiction films that don’t feel at all removed from present day — or should we say prescient day.

Another Earth, their 2011 debut, posited the discovery of another Earth-like planet, and its tortured protagonist enters a contest to fly their on a civilian spacecraft, in a project spearheaded by a millionaire entrepreneur. Two years later, here on our Earth, a similarly eccentric CEO launched the Mars One project, which plans to provide one-way tickets for Earthlings to colonize Mars beginning in 2022. I Origins, the newest film from these inventive collaborators — though this time, Marling is a front-of-the-camera presence only — likewise charts scientific frontiers that feel of-the-moment.

The movie’s first image is a dilating pupil, and we’ll see a lot more eyes, and hear a lot of jargony chatter about eyes, for the next couple of hours. Dr. Ian Gray (Michael Pitt), with help from his assistant Karen (Marling), is trying to sequence a human eye from scratch, by finding a species that doesn’t have eyes and genetically creating them, a process that Ian asserts will disprove the creationists’ argument that the complexity of the eye cannot be explained by evolution.

But in the doctor’s love life, he’s getting a daily dose of spirituality from his exotic new girlfriend Sofi (Àstrid Bergès-Frisbey), whom he meets eyes-first at a Halloween costume party, fornicates with her in a bathroom stall, loses contact with her, and is then drawn to her, later, through a series of uncanny synchronicities that begin to chip away at his rigidly scientific worldview. Forced to reconcile data-driven research and psychic phenomena, his personal and professional lives are pulled in opposing directions, like stretched taffy that eventually breaks in a confluence of revelations, chance events, tragedies and predestinations.

On a basic human level, Cahill is a talented chronicler of sexual tension and dramas of the heart, though this film has much more on its mind as the story wends toward the subjects of past lives and reincarnation, signs and symbols, eyes and more eyes. It’s never boring, and it reminds us that movies have been a playground for the metaphysical imagination since the sci-fi silents of George Meliès.

But as Ian, and by extension Cahill, journeys away from New York City labs and toward soul-searching quests to Boise and New Delhi, it strains credulity — not scientific or spiritual credulity, which the movie protects itself against through its concepts, but cinematic credulity. The narrative’s detours become senseless and silly, maudlin and Hollywoodized. You can almost feel the picture slipping away from its thesis, jettisoning interesting plot points from earlier in the movie for wild goose chases — finding an iris in an Indian haystack, as it were. Along the way, its audience graduates from being one step behind it to one step ahead of it.

Still, I Origins, while lacking the visionary craftsmanship of Another Earth (or the films Marling co-wrote, like Sound of My Voice and The East) has more ideas in any one reel than just about all the other movies playing at the multiplex contain in combination. The film leaves plenty for viewers to digest, whether you believe we are timeless souls chained only briefly to this three-dimensional reality or random collections of atoms bouncing around in finite human form.

Film: Playwright August Wilson began his chronicle of the African-American experience throughout the … END_OF_DOCUMENT_TOKEN_TO_BE_REPLACED

Film: Just in time with the opening of movie theaters in Palm Beach County comes the season’s most … END_OF_DOCUMENT_TOKEN_TO_BE_REPLACED

Music: The very last concert Franz Joseph Haydn attended in his life was in March 1808, about a year … END_OF_DOCUMENT_TOKEN_TO_BE_REPLACED