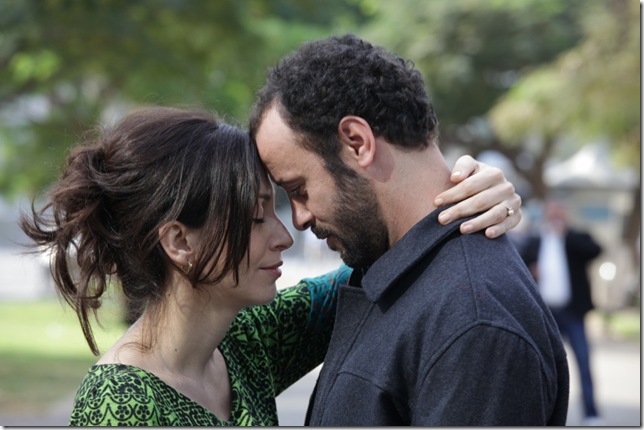 How’s this for a premise most filmmakers wouldn’t touch with a pole the size of the Gaza Strip: An Arab surgeon who has become fully acclimated in Israeli society receives a career-crowning award from the nation’s medical establishment. The very next day, a bomb explodes in an Israeli café, killing 17 people and maiming many others, including children. The suicide bomber who lit the fuse was none other than the surgeon’s beautiful young wife, a Christian with no history of radicalism — at least none that the surgeon was aware of.

I’m giving nothing away here — all of this information is delivered in roughly the first 15 minutes of The Attack, Lebanese director Ziad Doueiri’s provocative, dangerously brave new drama that explores the contentious, untenable reality of life in the world’s most volatile region through the prism of two people mired in the middle of it.

Ali Suliman plays Amin Jaafari, the doctor in question, who is understandably shaken to the core when forced to identify the half-exploded cadaver of Siham (Reymond Amsalem), the woman he loved, then come to terms with the unspeakable atrocity she inexplicably committed. After an aggressive shakedown from the Shin Bet that clears his involvement in the massacre, he decides to retrace his wife’s steps, to find out exactly where, and from whom, her radicalism flourished.

Based on Yasmina Khadra’s powerful novel, The Attack is a slow-burning mystery, a cinematic symphony of secrets and lies, and a meditation on the desire for peaceful assimilation versus the ethnic purity of discord that lies at the heart of any “defection” to the other side, whatever that side may be.

But more than anything, this is that rare film that tells the truth about just how intractable the Israeli-Palestinian religious and ethnic divide is, and reveals how naively Pollyanaish most films about the division are. Movies like The Other Son, Beyond the Walls, Lemon Tree, A Bottle in the Gaza Sea and Jaffa envision a world where differences melt away into a liberal-PC ooze of common ground and why-can’t-we-all-just-get-along pieties.

The Attack shows that this couldn’t be further from the truth.

When Amin, who is by all intents and purposes an Israeli citizen, journeys back to his homeland in Nablus, his cabdriver pops in a cassette tape of a hateful Muslim cleric preaching about killing the infidels and various and sundry pabulum. The driver naturally assumes his rider agrees with the message, equivalent to an Alabama taximan blasting an evangelical rant for any and all comers.

When Amin steps out into the town square, pictures of his wife already emblazon public walls and novelty postcards: She’s become a national hero for murdering innocent children in the name of Palestine. When he visits a distant relative whom his wife saw shortly before she blew herself up, the man says that he’s “so proud” of Siham’s actions, and he’s shocked to learn that Amin doesn’t feel the same way. When Amin reaches the mosque where his wife rendezvoused with a sheikh, he is thrown out of the building by glaring Muslims. Despite his heritage, he has become an Israeli interloper, a traitor to the cause; he might as well be a Jew from New York.

Make no mistake about it: Without resorting to propaganda, Doueiri doesn’t make any false equivalencies here. The problem here is Arab fundamentalist rage. Without discounting the issues wrought by the Jewish state — like Israeli settlers, incendiary Zionist rhetoric, and the various forms of oppression related to the occupation of Palestine — the vaunted celebration of the death and destruction of innocents only comes from one side. When the Israeli military or intelligence agencies kill innocent civilians, it’s viewed in Israel as a shameful, regrettable mistake; when it happens on the other side, the terrorists are lionized by the people.

Doueiri is currently living in exile in France. He is unable to return to his native Lebanon because he broke an arcane, oppressive law by shooting his film in Tel Aviv. Likewise, The Attack has been banned from exhibition in Arab countries and denounced by the Arab League. Doueiri is, in my eyes, a national hero, and he should wear the ban as a badge of honor, much like Salman Rushdie’s fatwa.

And yet, Doueiri softens his film’s argument in a political cloak, not a religious one, saying in an interview following the film’s recent Miami premiere that “this is not about religion, from the Palestinian side.” And events near the end of the film suggest as much, including a visit to a decimated Palestinian site.

These moments are less convincing than the shocking reality that preceded them on the streets of Nablus; even if politics were the direct cause of Siham’s terrorist action, religion is at the core of the very idea of suicide bombing (and, in Khadra’s source material, she is a Muslim).

Some of Doueiri’s decisions are disingenuous here, but they don’t damper the enlightening experience that preceded them. And watch the final scene through your tears: It’s a masterstroke of emotional devastation, capping a movie that should be a required viewing for anyone with a remote interest in an unfiltered look at the world’s current great divide.

Film: Playwright August Wilson began his chronicle of the African-American experience throughout the … END_OF_DOCUMENT_TOKEN_TO_BE_REPLACED

Film: Just in time with the opening of movie theaters in Palm Beach County comes the season’s most … END_OF_DOCUMENT_TOKEN_TO_BE_REPLACED

Music: The very last concert Franz Joseph Haydn attended in his life was in March 1808, about a year … END_OF_DOCUMENT_TOKEN_TO_BE_REPLACED