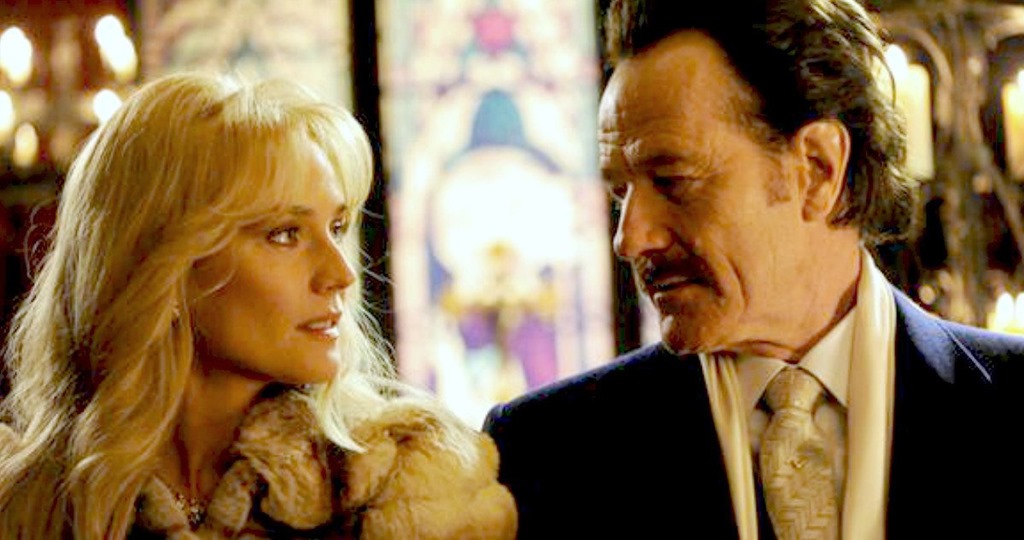 Diane Kruger and Bryan Cranston in The Infiltrator.

Actors are salesmen pushing the products of their characters, and Bryan Cranston, as the saying goes, could sell snow to Eskimos. Disappearing into his roles like a ghost in a fog, he’s arguably the greatest thespian of his generation, which is to say the greatest confidence man, hooking us into believing there’s no one behind the curtain. There’s only the facade.

The Infiltrator prompts such philosophical musings on the craft of performance — of American acting as American hustle — because it’s woven into the movie’s DNA. In this fact-based crime drama about the quest to bust Colombian drug lord Pablo Escobar in the 1980s, Cranston plays U.S. Customs Service special agent Robert Mazur, who specializes in undercover operations, embedding himself in society’s dregs.

Off-duty, he couldn’t be a squarer family man, with a wife, a pair of children, a home in the ʼburbs and a dedicated presence at board game nights and PTA meetings. On the clock, he’s Bob Musella, an unctuous money launderer gradually gaining the trust, access and cash of the Escobar empire, an environment increasingly dominated by strip clubs, mansions and private jets.

Similarities to Breaking Bad, with its bifurcated Cranston straddling worlds of light and dark, are hard to ignore. The series couldn’t have been a better audition for Mazur’s complicated biography. The chirality of the special agent’s life is most evident in the best scene of The Infiltrator, an anniversary dinner with Mazur and his wife Evelyn (Juliet Aubrey) in which an Escobar colleague materializes at the table, prompting this movie’s mild-mannered Walter White to turn Heisenberg at the drop of a pin.

The Infiltrator isn’t the first film made about the delicate charade of undercover spycraft, with its then-cutting-edge surveillance gadgets — a briefcase that doubles as a recording device — and the perennial threat of discovery looming over every underworld exchange. But the film has an exuberant personality all its own, with spiky humor provided by John Leguizamo as fellow-agent Emir, Amy Ryan as their salty-tongued Customs chief, and Olympia Dukakis as Mazur’s yenta aunt.

The movie revels in the juicy details extracted judiciously from Mazur’s book: He selected his aliases by trolling tombstones for surnames; the under-resourced federal government had to purchase the use of Burger King trucks to ice corpses following certain grisly crimes; Escobar threatened suspicious colleagues not with horse heads in their beds but with miniature bloody coffins mailed to their home addresses. (Speaking of The Godfather, The Infiltrator ends on a doozy worthy of Vito Corleone.)

In short, The Infiltrator may lack the mesmerizing distinctions of last year’s great drug-war movie, Sicario, but not since the equally accessible Argo has a historically based spy narrative been delivered with such a deft combination of comedy, thrills and high tension. Brad Furman, who previously directed Cranston and Leguizamo in The Lincoln Lawyer, paints the film in brown and gold shades of ʼ80s nostalgia without lapsing into decade festishism, and screenwriter Ellen Brown Furman smartly funnels Mazur’s book into largely naturalistic dialogue.

Occasional clichés surface, but at least they’re deployed for revealing ends: “Promise me this is the last one,” pleads the long-suffering Evelyn, whose husband, in stupid-heroic movie fashion, forwent retirement for another dangerous in-depth sting, as addicted to the adrenaline of his second life as Walter White was to his.

The larger context of the Escobar sting — the futility of the drug war — lies mostly unspoken, jettisoned to the buzz-killing domain of muckraking documentarians. And that’s fine. The Infiltrator is a two-hour ride with a master of deception doing his thing, and we’re privileged to watch him work it.

Film: Playwright August Wilson began his chronicle of the African-American experience throughout the … END_OF_DOCUMENT_TOKEN_TO_BE_REPLACED

Film: Just in time with the opening of movie theaters in Palm Beach County comes the season’s most … END_OF_DOCUMENT_TOKEN_TO_BE_REPLACED

Music: The very last concert Franz Joseph Haydn attended in his life was in March 1808, about a year … END_OF_DOCUMENT_TOKEN_TO_BE_REPLACED