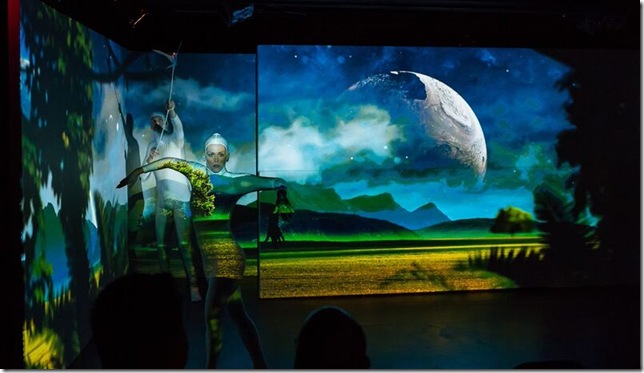 Although the operatic art form is enjoying a period in which edgy productions are much more common, you still have to go some distance to find one that’s closer to experimental.

But that’s what composer Carson Kievman has done with his new opera, Intelligent Systems, which premiered last week at the SoBe Institute of the Arts and presents its final performance tonight in the Miami Beach arts group’s Little Theater.

Conceived in 1980 and commissioned in 1982 by the Germany’s Donaueschingen Festival, a renowned contemporary music gathering, Intelligent Systems is an exploration of the universe, the history of mankind, civilizational collapse, power inequalities and biological renewal, all set to a compelling and straightforwardly tonal score that makes serious demands on its six singers. 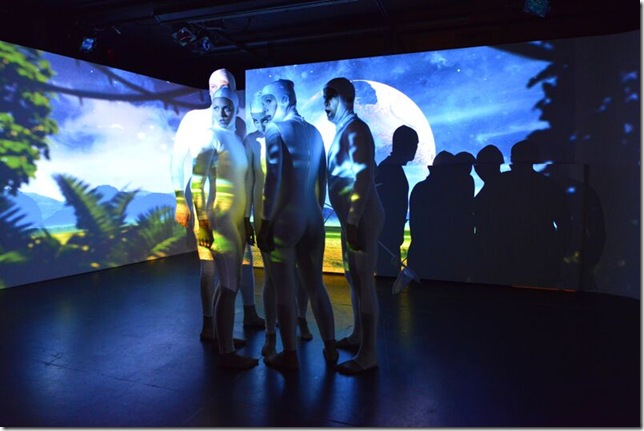 Fortunately for Kievman, he has a very fine cast of three men — tenor Timothy Stoddard, baritone David Robinson and bass Eric McConnell —and three women — sopranos Danielle Buonaiuto and Nathalie Avila, and mezzo Zaray Rodriguez — who are able to pull off his vocal challenges with strength and accuracy.

Musically speaking, Intelligent Systems is more of a staged oratorio than it is an opera, and a choral oratorio at that, given that it has relatively little solo work. It could easily be done with a big chorus, the images and a large orchestra in a concert setting and no staging, and the music would translate very well.

Essentially, the audience is invited to take a trip back to the Big Bang in which all of the action on stage takes place against a constantly shifting digital backdrop: Stars, unicellular life, trilobites, vistas of a distant planet with gigantic planets nearby, among many other things. The first half reviews the history of our planet and the life forms that it fostered over a period of 3.5 million years, though it’s presented as happening on another Earth-like planet in a parallel universe. The act ends with a primitive society being pushed out by humans of a more acquisitive stripe. 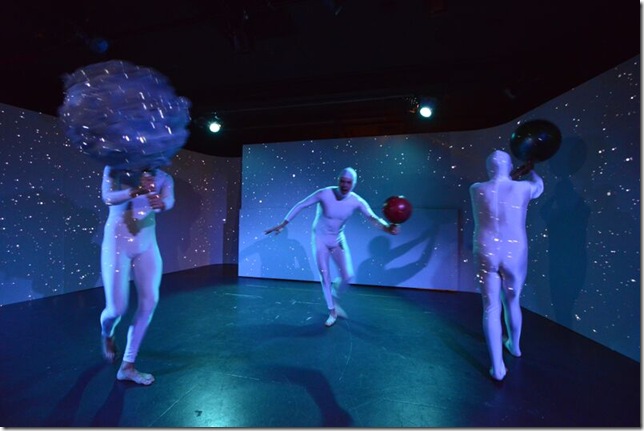 The second half features a modern world created by big business interests in which tours of 15 global hotspots are offered to wealthy customers who can watch wars, assassination attempts and massacres. The civilization is done by its greedy, careless human overlords, and in the annihilation that follows, a new human-like species begins to flower in the depths of the ocean, human heads appearing on flowering branches and singing hellos.

Kievman’s libretto, which essentially is a series of chronological scenes rather than a story line, is somewhat heavy-handed and often impossible to parse, given the style of the vocal writing and the frequent overlaps, which make it hard to figure out what’s being said. But the score, unlike his previous two operas, Hamlet and Fairy Tales: Songs of the Dandelion Woman (both also much older, long-delayed projects that were refurbished and premiered in the past three years), has a more varied texture and a richer variety of musical styles.

Kievman’s compositional approach in his other works tends to be full-on intense with little break, but in Intelligent Systems, he offers a wider palette of colors. While the first half of the opera has a neo-Straussian wall of sound as its fundament that continues more or less uninterruptedly as the viewer is pulled into the Big Bang, the second opens with an a cappella quartet and ends with choral lines that gently overlap each other as they swell and then fade away. There are also two sections in the music where there is a strong calypso-reggae flavor that doesn’t integrate terribly well but provides an ear-catching difference.

The key dramatic element here is the opera’s digital projections, designed by Alain Lores. He has done an excellent job of taking Kievman’s original storyboards and turning them into the backdrops that frame the opera. He even operates a drone that zips around in toward the end of the second half as the world heads for collapse. These images are very much a central character of this opera, and it’s no mystery why the technology of the early 1980s was not up to the task. 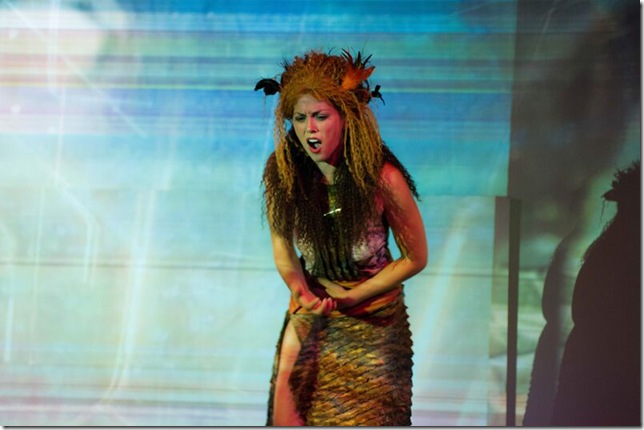 Given that, director Jeffrey Marc Buchman had a serious hurdle in his path, but he has managed to clear it expertly. He has built drama into the libretto that wasn’t really there, in particular at the end of the first half, when a village of peaceful early humans (called the Tyzo) is disrupted by the domination of a sacrifice-eager priest, in an echo of the factors that led to the destruction of the Aztecs and other Mesoamerican communities.

This, too, is where the most notable solo singing comes in, with Buonaiuto and McConnell as the Tyzo couple whose world gets turned upside-down. Buonaiuto, a Canadian-born singer, has a strong, clear, agile voice, and she brought the most serious acting chops to the performance, doing everything she could to make her role as one half of a Tyzo couple as believable as possible. McConnell was almost as strong acting-wise, and his forceful bass voice has a lovely lower register. 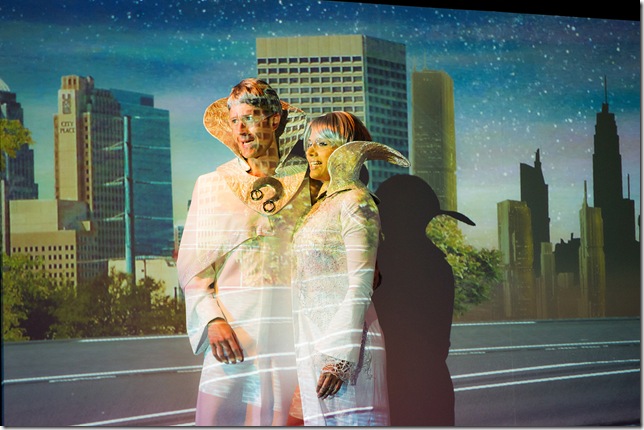 Still, this is an opera that required all six of its singers to tackle a wide variety of activities, and all of them were admirable and accomplished. They gamely dressed in a wide variety of extravagant costumes (cheekily designed by Camilla Haith), including 30th century unitard space gear, 1 Million Years B.C.-like cave dweller outfits, plus fanciful tribal priest gear and formal wear from Jor-El’s closet.

The 13-piece orchestra under Mary Adelyn Kauffman was very fine, with first-rate players from all over the area mastering a complex and difficult score with polish and panache. There was especially nice work from timpanist Tyson Voigt, who had a workout that included doubling of the vocal line in several passages plus abundant writing for tubular bells, and from keyboardists Elena Fomicheva and Masami Miyazaki, who ably filled in so much of the weighty sonic texture.

The performance takes place in the very small Little Theater, a black box of no more than 40 seats. In the back was the orchestra, the patrons were up front, and along the narrow aisles amid the seats singers entered and left, which gave the audience a very intimate experience that was always interesting and frequently rewarding. There are places where the work could be turned in something more explicitly operatic, such as the Tyzo scene, and in the funniest idea, the 15 hotspots, which feature snazzy graphic ads urging patrons to sign up early to watch mayhem in less favored parts of the globe. 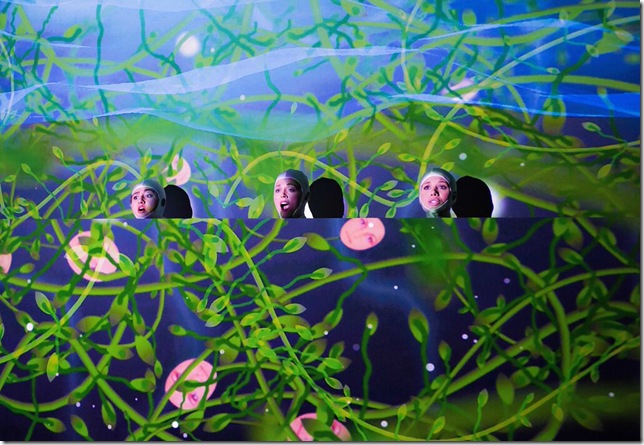 It’s not that far-fetched, and the issues Kievman tackles are still urgent today, though it’s hard to grasp his full intent without supertitles. Nevertheless, Intelligent Systems is like no other operatic experience you’re likely to have anywhere else in South Florida, and in its determination to take on the very biggest subjects in a work of uncompromising musical and dramatic creation, it reminds us why art is so important in the first place, and why we should support it when it appears, even in a tiny theater whose dimensions can scarcely contain its ambition.

Film: Playwright August Wilson began his chronicle of the African-American experience throughout the … END_OF_DOCUMENT_TOKEN_TO_BE_REPLACED

Film: Just in time with the opening of movie theaters in Palm Beach County comes the season’s most … END_OF_DOCUMENT_TOKEN_TO_BE_REPLACED

Music: The very last concert Franz Joseph Haydn attended in his life was in March 1808, about a year … END_OF_DOCUMENT_TOKEN_TO_BE_REPLACED