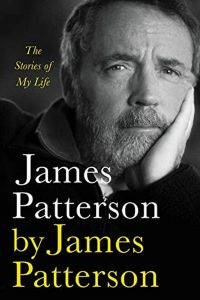 “Your Jersey Shore house is burning!”

How did the fire start? The author doesn’t say.

Was it an electrical short? Nah. Spark from a neighbor’s grill? Yawn. Lightning strike? Maybe.

And the arsonist is a totally sadistic serial killer who is on the loose! The FBI is on the case!

That’s the plot from Patterson’s Invisible, co-written with David Ellis.

But in real life, you won’t find out why Patterson’s beach house burned down. Or how much it cost. And whether it was replaced. We assume no one was inside.

Instead, Patterson ends the chapter abruptly. The insurance company paid for the half that was destroyed.

Most of this frustrating book has a truncated feeling. Patterson learns his beloved grandmother has dementia. Who will take care of her? Did he ever see her again?

There are fleeting references to a college friend who committed suicide, Patterson “thinks about him every day.” No details on how he died. Patterson’s first crush died in her 20s, he found out when he happened across her tombstone. No explanation. Even when a naked man jumps into his hotel bed, uninvited, there’s not much to say. #Metoobaffled.

Patterson wrote this autobiography in the same style as his enormously popular kids books. “Short chapters with cliff-hanger endings and many funny situations will hold readers’ attention and leave them wanting more.”

Or as he instructed one of his 44 (and counting) co-writers, “We are in the business of entertainment, not edification or enlightenment.”

Except this book is for adults, many of whom have been reading him for decades. Most expected this book to be, if not his capstone, his legacy.

Patterson values plot, setting, theme and character, but in his own telling of his life, he hid his character. This is Remembrance of Things Fast. It feels incomplete.

Patterson is charming and self-deprecating. “Hey, if I can make my life story interesting, I can make just about any story line work.”

“College … turned out to be a terrific experience that helped mold and shape me into whatever the hell I am today.”

But here is a fascinating, determined, wildly successful man who came from no money with no connections and has since golfed with four presidents and earned around $800 million. “I refused to give up on myself.”

Patterson’s instincts, hard work, discipline and drive are why he sold his first book at 26 and became CEO of the huge advertising agency, J. Walter Thompson North America.

Even though it is rushed, Patterson’s book entertains with two-page chapters. He strings together funny anecdotes and name dropping.

But there are no family photos. Not even a list of his (approaching) 300 books.

We do learn that in “idyllic” Palm Beach, where Patterson has a home, there is another James Patterson.
He used to own a Long John Silver’s and sometimes passes himself off as the author so he can get hotel room upgrades and free fruit.

“I deflect a lot with humor but I have a very serious side,” the author James Patterson admits.

That’s about it for the inner life of the world-famous author who has sold 425 million books, given $70 million to charity (mostly for literacy) and employs 16 in his publishing empire.

A New Yorker review concluded Patterson is not able to tell the story of his own life.

I don’t buy it. This was a business decision. He didn’t want to tell it.

This was a rare miscalculation by the man with golden instincts. A Palm Beach millionaire who not taken in by Madoff.

Patterson noted that the few times publishers rejected his books, they regretted it once they became bestsellers. This includes the non-fiction, The Day America Told the Truth (co-authored by Peter Kim) as well as the heartbreaking Sarah’s Diary for Nicholas. Patterson insisted on publishing though told these books were off brand.

Today, the author says his most important work is Walk in My Combat Boots (with Matt Eversmann.) Another massive bestseller. Not on brand either.

None of these are about Alex Cross, Michael Bennett or Women’s Murder Clubs. They aren’t even crime fiction.

This time around, when the subject was himself, perhaps the 75-year-old Patterson thought if he revealed too much — it would deviate from his brand. If so, he underestimated his audience’s admiration and its attention span. And he failed to tap the vast potential audience of those who don’t care for his books but are eager to know the man.

This autobiography is where James Patterson should have stood up for … James Patterson. It’s a missed opportunity. But not a lost one. If anyone can repackage previous material, improve the concept and have a new book wildly acclaimed; then made into a spicy Netflix series, it’s James Patterson.

Mulligan. This is the perfect idea for book number 300!

Film: Playwright August Wilson began his chronicle of the African-American experience throughout the … END_OF_DOCUMENT_TOKEN_TO_BE_REPLACED

Film: Just in time with the opening of movie theaters in Palm Beach County comes the season’s most … END_OF_DOCUMENT_TOKEN_TO_BE_REPLACED

Music: The very last concert Franz Joseph Haydn attended in his life was in March 1808, about a year … END_OF_DOCUMENT_TOKEN_TO_BE_REPLACED