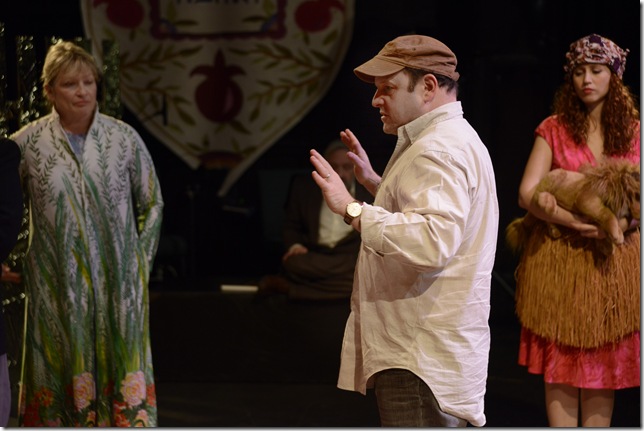 It is kind of a cliché: Jason Alexander is a Tony Award-winning and seven-time Emmy-nominated actor, but what he really wants to do is direct.

And because of a little sitcom called Seinfeld, he can indulge his affection for directing, because he really doesn’t have to work another day in his life.

“No, not financially, but I need to work emotionally. I don’t need to make a lot more money. I do this stuff because I love doing it,” he says by phone during a rehearsal break at the Mizner Park Cultural Arts Center in Boca Raton, where his revue with music, When You’re in Love, the Whole World Is Jewish, opens this weekend.

“Directing is great, much more satisfying than performing.” Alexander says. “Directing is everything acting is times 100.”

If the show’s title sounds familiar, perhaps you are around Alexander’s age — 55 — and sat around the living room stereo in the mid-’60s, listening to this comedy album and its sequels, which featured Lou Jacobi, Betty Walker, Frank Gallop and a young Valerie Harper.

Certainly young Jason and his family did. “Yeah, I remember them very well. In fact when the guys called me and said, ‘We’re doing a revue of this, would you be interested?’ they thought I would never have heard of these recordings, and I went, ‘I know them inside out and backwards.’ ”

So Alexander signed on to co-write and direct the show, even though he recognized the potential pitfalls in the material. “The thing that potentially works against it is that these jokes were old when they made the album,” he says. “So you begin to hear the set-ups of these jokes and you instantly know where the punch line is going.

“So for an older audience, there’s a nostalgic joy that comes from this. For younger audiences that have probably never heard the joke, there’s the joy of a new joke. But what we found when we did this in Los Angeles and San Francisco, even if you know the punch line, there’s something about seeing these things visually and watching six actors become close to 60 different characters, there’s a real theatricality to it that is joyful.

“So even if the punch line is not the big thing, there’s a lot of laughs in every sketch, but not the ones that you would necessarily have thought would be the big laughs. Then the punch line is sort of a sing-along, everybody can do it at the same time,” he said.

But as Alexander was helping to build the show from the vintage albums, he sensed that it needed something more — music. “That’s when we decided we needed to write some original songs. So there are three completely original songs in the show that I wrote, about things that are within our theme, but they did not come from the original album in any way, shape or form.” 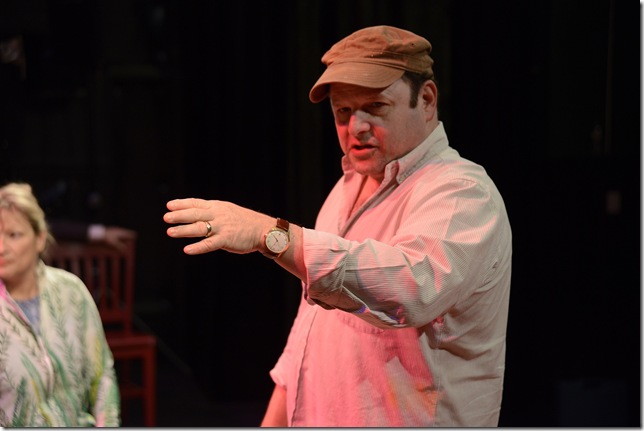 In addition, as a transitional device, the onstage band plays and sings short ditties based around teaching the audience Yiddish phrases.

“So now it feels like there’s a ton of music in the revue and that’s one of the things that sets it apart from say, ‘Jewtopia’ or ‘Old Jews Telling Jokes,’ which also explore the roots of Jewish comedy,” explains Alexander.

The Jewish angle is certainly a big part of the show’s success, Alexander concedes. “Well, it certainly is down here, and in L.A., there was a natural audience for it.”

But, of course, he quickly adds, “In all the locations that we’ve played the show, we’ve had a very large non-Jewish audience in attendance as well. And they had a great time. There’s nothing here that you wouldn’t get if you weren’t Jewish.

“The thing you’d miss, when you start to hear these Old Vorld excents, if you don’t know who these actors are representing, if you didn’t have a zayda in your family” — a grandfather — “it doesn’t have the same impact as if you did. You still get the jokes, but there’s just something about going, ‘Oy, I know who that person is that they’re trying to evoke here.’

“It will always work very well in Jewish communities,” says Alexander confidently. “I can’t imagine a church group is going to get up and do this show, but certainly community theaters will be able to get behind it and have a good time with it.

“It’s a very easy show to tour. Six actors and four musicians and a very compact set. And it can play a big space or a small space. In Los Angeles, we had a 99-seat theater, in San Francisco we had a 600-seat theater. And it played equally well in both. It’s a nice flexible, family-friendly, everyone-friendly show. It could be something that really catches on.”

So Jason, what is a Jewish sense of humor anyway?

“That’s a very good question,” he responds. “There are two elements to it. I think. One of them is that it is almost always self-deprecating. Jews tend to have a not-difficult time laughing at themselves, which I think is one of our best qualities.

“The other part of it is there is a sense of optimistic fatalism. ‘Nothing’s going to work out, so why should we get worried about it?’ And there’s also a lot of Jewish humor based on classic misunderstandings.”

To ensure that you do not misunderstand and think that When You’re in Love, the Whole World Is Jewish has any deep message, Alexander concludes by saying, “This show is nothing more than 90 minutes of silly good fun. If you’re going out for an evening and you know you want to have a good time, I can pretty much guarantee you that. You’ll do some foot-tapping, you’ll have a lot of laughs, you’ll go out very hungry — because we do a whole number about Jewish food — and it’s a great way to get away from all the meshugas that’s going on in the world.”

Film: Playwright August Wilson began his chronicle of the African-American experience throughout the … END_OF_DOCUMENT_TOKEN_TO_BE_REPLACED

Film: Just in time with the opening of movie theaters in Palm Beach County comes the season’s most … END_OF_DOCUMENT_TOKEN_TO_BE_REPLACED

Music: The very last concert Franz Joseph Haydn attended in his life was in March 1808, about a year … END_OF_DOCUMENT_TOKEN_TO_BE_REPLACED