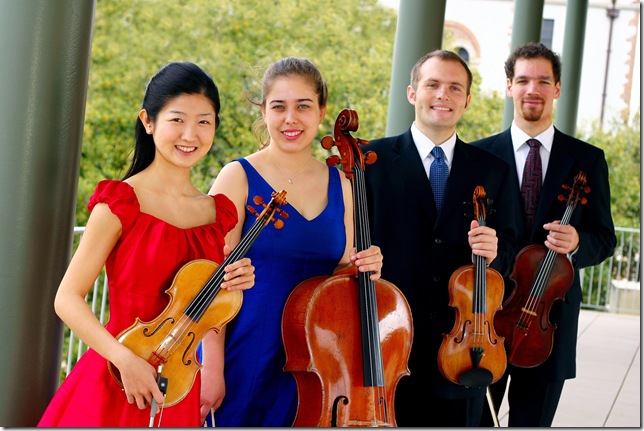 The Jasper String Quartet is the young face of American chamber music, now and in the future. To my mind they are on their way to replacing the eminent, now disbanded, Emerson String Quartet.

Formed at Oberlin College, they won the very prestigious Cleveland Quartet Award and the Astral Artists 2010 National Auditions, and sought out the daunting Tokyo String Quartet to learn from them at Yale University, where they were honored as graduate quartet-in-residence. Their dedication is paying off.

The quartet appeared Monday night at the Kravis Center’s Rinker Playhouse as part fo the center’s Young Artists series. From the first bars of the Haydn Quartet No. 67, (in F, Op 77, No. 2), one sensed it was a case of youth at the helm, with playing that was refined and refreshing. It was wonderful to hear them get so much light and shade into their interpretation of the Allegro with its vivid contrasts, volumes and tempo.

The minuet, with its stops and starts, was brilliantly played. And the third movement , Andante, began with some beautifully played cello melodies by Rachel Freivogel followed by long harmonious drawn out chords and great pauses that spoke volumes about their discipline and artistry. In the fast triple-meter Finale there were smiles all around from the quartet, ably led by first violinist J Freivogel.

Haydn, the master of this art form, wrote this quartet at age 67, but these four youngsters breathed new life into it with a spirited rendition. Much to my amazement, the audience reaction was lukewarm. Other string quartets I’ve heard this season, not as good as the Jasper, won two and three callbacks at other venues. Put it down to a jaded outlook and a Monday night, start-of-the-week lethargy. The Jasper deserved better.

Bedrich Smetana’s First String Quartet followed. J Freivogel spoke of Smetana’s reason for writing this piece. Afflicted by tinnitus, a constant ringing in the ears (here, Sae Chonabayashi, second violin, demonstrated by slowly drawing her bow across the high E that Smetana heard and added to the piece), Smetana wanted to take listeners through a journey of the ups and downs of his life (he later became totally deaf and ended his life in an asylum).

The first movement recalls Smetana’s love of the arts growing up. Marked Allegro vivo appassionato, it opens with an E minor salvo, and a heartrending tune, beautifully played on the viola by Sam Quintal. Undercurrents and a three-note anxiety theme suggest unrequited love.

In the second movement , Smetana uses a polka rhythm, a nod to his love of Bohemia, the dance and its Czech origins. In it, the cello raucously plays to suggest a trombone, and the first and second violins play to sound like accordions. The Largo sostenuto is a loving ode to his late wife, who died of tuberculosis. A lovely melody and a reverie  grows with intensity, giving the cello (wife) the final bars as the other three wind their melodies around it. Such refined playing here from all four instrumentalists made for a deeply moving and lovingly played movement.

The lively, rich Vivace has a few discordant sounds and the dreaded high E that stops the music in its tracks. But it turns into a hymn-like theme with hints of Smetana’s tone poem cycle Ma Vlast (My Country), as the viola dies away into nothingness. Again, only polite applause greeted the Jaspers’ amazing performance.

Finally, Mendelssohn’s Quartet in F minor (No. 6, Op. 80), written in 1847 to honor the death of his sister, Fanny, is full of dark harmonic writing and emotional yearning. He died months later in the same year, at just 38.

The first movement is a harrowing treatment of his sorrow. The second begins anxiously and is funereal in parts, a sort of quick death march to the grave. A loving lament, melancholic at times, whose themes pass by one by one with none of Mendelssohn’s usual vitality, ends the third movement.

And the last reflects the composer’s sad mood with very difficult passages played with incredible beauty by these young masters. Their command of this music was

superb. However much I enjoyed their performance, I was at a loss to explain their choice of the Mendelssohn, thinking it was not a good idea to end the program with such a downer.

How wrong I was: The audience’s reaction was explosive, with warm applause and shouted bravos. Older audiences identify with the ending of life, and these young players touched that chord in them with this piece. But they did not play an encore.

In closing, mention must be made of the beautiful gowns the young cellist and second violinist wore. A flowing burgundy red evening gown for the former, and a sunflower-yellow body-tight silk gown on the latter. The men wore dark business suits, collar and ties.

In time, as success begets success, maybe the women will wear gowns to fit the mood of each piece, as the late concert pianist Eileen Joyce once did in her recitals. Jasper is a class act, and its members know the value of showmanship.

Film: Playwright August Wilson began his chronicle of the African-American experience throughout the … END_OF_DOCUMENT_TOKEN_TO_BE_REPLACED

Film: Just in time with the opening of movie theaters in Palm Beach County comes the season’s most … END_OF_DOCUMENT_TOKEN_TO_BE_REPLACED

Music: The very last concert Franz Joseph Haydn attended in his life was in March 1808, about a year … END_OF_DOCUMENT_TOKEN_TO_BE_REPLACED