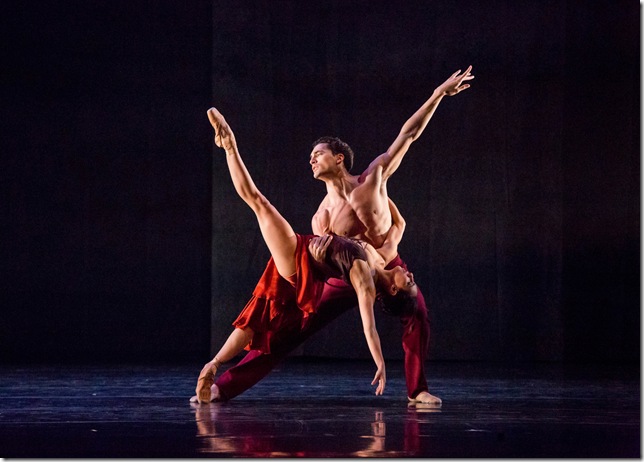 It was a good night at the ballet — a very good night. Playing to a packed house for one performance only, the Joffrey Ballet showed an easy command of the physically demanding and highly technical program it boldly presented March 12 at the Kravis Center for the Performing Arts.

The calling card of the evening was the line-up of dance makers — a virtual Who’s Who in the new tide of male choreographers making a big impact on the ballet world today. It was a rare treat to see the works of four members of this new club collected on a single program as well as to see these works so well-danced by the vivacious and super-talented dancers of the Joffrey Ballet, a company that rightfully prides itself in being all about the future of ballet.

Rendez-vous was a marvelously fast and furious duet choreographed by the company’s ballet master, Nicolas Blanc. It was created as a vehicle for Cara Marie Gary and Alberto Velazquez (the two astonishing dancers who performed it March 12) when they competed at the International Ballet Competition in Jackson, Miss., in 2014. The work truly epitomized what sublime athletes dancers can be. The tightly etched work, which won the Choreography Award at the competition, was designed to impress and that it certainly did.

Wearing dance-wear costumes the same color as the mulberry-hued scrim, Gary rebounded and spun showing off her beautiful arched feet and gorgeous bare legs in movements that were as sharp as scissors and accented with karate-like punctuation. She was partnered by the handsome Velazquez, who expertly manipulated her through the countless intricate maneuvers. Together their flawless speed and precise articulation seemed almost unreal. This astonishing show of extreme physical ability riveted us into appreciating technique just for technique’s sake.

Justin Peck, who has had several dances showcased by Miami City Ballet in the last couple of years, was also represented in this exciting evening of new works. His In Creases was an excellent choice to open the Joffrey program. It was a well-designed, coherent work with a lovely, calming sense of symmetry that was the perfect introduction to the natural vibrancy, technical prowess and appealing ease of the Joffrey Ballet dancers. In Creases was created just a few months before his Year of the Rabbit, which MCB performed at the Kravis only two weeks ago.

Using Four Movements for Two Pianos by Philip Glass, Peck set the stage with an elongate view of two gorgeous, black grand pianos — in profile and nose to nose to each other. Sitting at the outer edge of the pianos, dressed in black to match their instruments, the pianists Paul James Lewis and Matthew Long sat in dueling view of each other.

Peck chose a stark, white scrim to hang behind this live background set and to dress the dancers in white and pale gray with just a hint of the piano black on the leotard straps of the four ladies and the ballet shoes and socks on the four men.

The 15-minute ballet had a good deal of originality, especially in the arm movements and contemporary use of the torso, as well as in the clever group arrangements but there also was this very clear sense that it was balletic to the core with its framework of repeating arabesques and various tableaux. Peck’s confident construction had an assured clarity and a good balance.

A memorable and risk-taking moment was when — one by one — a dancer got up and leapt forward over the rolling seven dancers in a side-to-side step like a lumberjack crossing a river on top of floating logs.

Passengers was an angst-filled work created by Myles Thatcher, a soloist with San Francisco Ballet who has recently spent a great deal of time traveling as an awardee of the Rolex Mentor and Protégés Arts Initiative. Though Thatcher is clearly an important up-coming young talent, this work seemed overly affected by — and therefore driven by — the intensity of the score of the influential American composer Steve Reich.

Ensconced in a vintage look of 1950s train travel complete with small valises, printed frocks and train whistles, the list of characters (Lone Women, Shadowed Man, etc.) seemed out of sync with the score. The music and the non-stop choreography seemed more to reflect the intensity of the never-ending, accelerated pace of today. Jeraldine Mendoza, Anastacia Holden and Rory Hohenstein stood out in this work.

The voluminous Fool’s Paradise was a visually satisfying, abstract work set to a highly romantic score by contemporary composer Joby Fowler, who originally wrote it to accompany the The Dying Swan, a 1916 silent film. Choreographer Christopher Wheeldon’s configurations dissolved and emerged with a natural inevitability rolling from lush movement into moments of stillness.

The opening scene of the elusive figure of Mendoza upstage center in a shaft of golden light flanked by two guardians, Hohenstein and Temur Suluashvili, made one feel like one was seeing an apparition caught in a ray of sun that fell into the darkness of a cathedral. The soft luminous haze of the lighting was golden throughout creating a faded beauty that was taken a step further with help of cascades of shimmering leaves fluttering down periodically. It was so pretty and so gracefully danced that it had the cadence of a romantic poem.

The company dancers were simply marvelous. They are all very well-trained and they were beautifully coached in all the works. The partnering was fluid and seemingly effortless, the unison work was impeccable and the dancers’ lines and footwork were so clean and so lovely to see. And most importantly, there was a real sense of ensemble.

It is interesting to note that the company dancers are just listed in the program, unlike most ballet companies where the dancers are distinguished by rank such as principal, soloist or corp member.

The Joffrey Ballet, founded in New York and based in Chicago, is celebrating its 60th anniversary but it certainly doesn’t look its age. It is still young, fresh and vibrant and has been that way since the early days under the leadership of its founders Robert Joffrey and Gerald Arpino. Artistic Director Ashley Wheater is now at the helm and his focus is clearly in presenting ballet for today.

Film: Playwright August Wilson began his chronicle of the African-American experience throughout the … END_OF_DOCUMENT_TOKEN_TO_BE_REPLACED

Film: Just in time with the opening of movie theaters in Palm Beach County comes the season’s most … END_OF_DOCUMENT_TOKEN_TO_BE_REPLACED

Music: The very last concert Franz Joseph Haydn attended in his life was in March 1808, about a year … END_OF_DOCUMENT_TOKEN_TO_BE_REPLACED