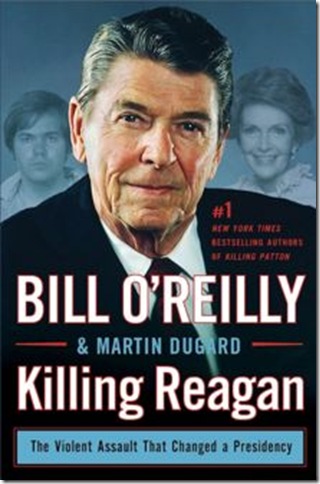 Only months into his first term as president, Ronald Reagan barely survived an assassination attempt as he was leaving a hotel in Washington, D.C.

The would-be assassin, John Hinckley, fired six “devastator” bullets designed to explode and spew hot shrapnel on impact. The first bullet hit Press Secretary James Brady in the head, crippling him for life. Other bullets wounded a policeman and a Secret Service agent. The last bullet pierced the president’s lung, stopping an inch from his heart.

Reagan lost half his blood supply. Doctors feared he might not live, but the president pulled through.

In crisp, fast-paced prose, Killing Reagan brings to life the fascinating career, from Hollywood to the White House, of the 40th president of the United States.

The most gripping parts of this book involve Hinckley, who suffered from schizophrenia and was found not guilty of attempted assassination by reason of insanity. To this day he continues to live in a mental hospital in Washington, D.C.

Hinckley became obsessed with the movie Taxi Driver, in which a character plans an assassination to impress his girlfriend. Hinckley fell in love with Jodie Foster, a young actress in the movie, and decided to win her love by assassinating someone. He considered various plots, including an attack on Congress.

Warning signs about Hinckley’s mental health were ignored. When he told a psychiatrist in 1981 that he was at the “breaking point,” the doctor prescribed “relaxation.” He also criticized Hinckley’s parents for coddling him and recommended that they kick him out of the house, which they did.

Months earlier Hinckley had been arrested at an airport in Nashville, Tenn., when X-rays detected three handguns in his luggage. A judge fined Hinckley $50 and ordered that the guns not be returned. Hinckley’s fascination with guns and his desire to impress the actress deepened.

Killing Reagan is the fifth in a series of “killing” books by these authors. Previous best-sellers chronicled the lives and deaths of Lincoln, Kennedy, Patton and Jesus, which together have sold millions of copies.

Fascinating sub-themes in this latest book involve astrology and Nancy Reagan’s growing influence on her husband. When Reagan was preparing to take the oath of office as governor of California, Nancy insisted that the ceremony take place at midnight “to reap the full benefit of Jupiter’s largesse.”

Nancy paid her astrologer $3,000 as a monthly retainer. In perhaps a bit of hyperbole, the authors say the president “goes nowhere and does nothing without approval” from astrologer Joan Quigley.

It is perplexing that the leader of the free world could be guided by the opinions of a stargazer. Perhaps more disturbing is Nancy Reagan’s growing influence over decision-making in the White House. Late in his second term, the president delegated many of his day-to-day activities to the first lady.

There was growing recognition that Reagan was suffering from Alzheimer’s, which was later confirmed by doctors. He had trouble recognizing people he had known for years, and after he left office in 1989 he even forgot that he had been president.

O’Reilly and Dugard do not offer an opinion about gun control or even hint at what lessons, if any, the attempted assassination held.

Overall, Killing Reagan offers a useful civics lesson on foreign and domestic issues in the second half of the 20th century, although the authors’ focus on trivia can be distracting. Do we need to know that on vacation, the first lady wore “a strapless green-and-black bathing suit with a straw hat”?

Film: Playwright August Wilson began his chronicle of the African-American experience throughout the … END_OF_DOCUMENT_TOKEN_TO_BE_REPLACED

Film: Just in time with the opening of movie theaters in Palm Beach County comes the season’s most … END_OF_DOCUMENT_TOKEN_TO_BE_REPLACED

Music: The very last concert Franz Joseph Haydn attended in his life was in March 1808, about a year … END_OF_DOCUMENT_TOKEN_TO_BE_REPLACED