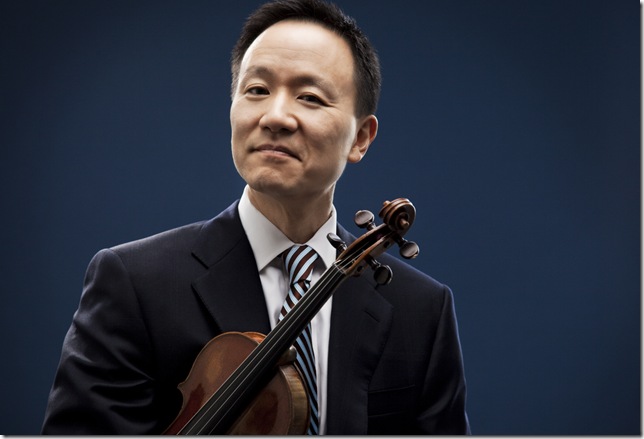 Last season at about this time, the Symphonia Boca Raton brought Philadelphia Orchestra concertmaster David Kim to the conductor’s podium for an evening of Baroque showpieces, and in so doing, brought a new kind of energy to the orchestra’s profile.

Kim was back again for a similar style program Saturday night at the Eissey Campus Theatre at Palm Beach State College in Palm Beach Gardens, with Kim leading members of the orchestra in some Bach staples, a Pachelbel warhorse, and a Piazzolla showpiece. This program had the same kind of easy, ambitious feel as last year’s Kim appearance, and was similar in style to the younger, avant-garde ensembles of today for which anything goes and for whom engaging the audience is critical.

Two of J.S. Bach’s Brandenburg concerti, No. 2 in F and No. 3 in G, framed the concert, and the Third, usually considered the most popular of the six-concerto set, began it. Kim led all the proceedings, in which most of the orchestra was standing throughout, from his concertmaster post, jumping into the solo spotlight when necessary.

The third Brandenburg ambled along in genial fashion in the first movement, and went hell for leather in the second (I do wish performers would add something like the slow movement of the E minor violin sonata for the missing section). Group ensemble was rather rough, intonation suffered early on, and the second and third-tier violins and violas were not as polished as the firsts when it came time for their short solo bits.

And yet it was still the Brandenburg No. 3, and the members of the Symphonia were successful in bringing much of its infectious spirit to the modest Eissey house. No doubt it will be tighter and more in tune when it’s repeated this afternoon at the Roberts Theater in Boca Raton.

Ensemble was better for the next piece, Johann Pachelbel’s Canon in D, which floated through the auditorium with all its smooth charm intact. Kim chose a very tender reading of this Baroque staple, unlike the more familiar near-ecstatic expansiveness popular from numerous recordings, and the piece gained something thereby.

Oboist John Dee, formerly of the Florida Philharmonic and now a respected professor at the University of Illinois, joined Kim in Bach’s Oboe and Violin Concerto (in C minor, BWV 1060) to end the first half. Dee has a big, generous sound that carries impressively, and aside from a couple of air-notes here and there, he played beautifully. Kim also played masterfully, but he tended to defer to Dee (all that orchestral ensemble playing has its drawbacks), and it would have been more effective had he played with some more presence.

Here, too, the Symphonia was somewhat ragged, if not distractingly so, but in the second movement, the accompanying strings tended to rush their pizzicati, and therefore the sololists, so that the music never had a chance to settle and inhabit all of its sonic room.

The second half opened with the Four Seasons of Buenos Aires by Astor Piazzolla, in Russian composer Leonid Desyatnikov’s arrangement for solo violin and strings, which references Vivaldi’s Four Seasons as well as the Pachelbel Canon. Kim and the Symphonia sounded very committed to this very difficult music, and the group ensemble was noticeably sharper and more powerful.

Kim appeared to greatly enjoy his solo excursions, digging into the showy glissandos, playing the cadenza passages with fire and spirit, and bringing out much more of his solo voice in the slower melody sections of these distinctive tangos. The orchestra was with him every passionate step of the way, most notably cellist Christopher Glansdorp, whose long and flawless solo in the Otoño movement had everything it needed: dark, lovely tone, deftly played fingerboard acrobatics, and a quality of evocative melancholy that fit this music perfectly.

Dee returned for the closing work, Bach’s Brandenburg Concerto No. 2, joined by flutist Jeanne Tarrant and piccolo trumpeter Jeffrey Kaye, the orchestra’s artistic director. Kaye played out front with Tarrant, Dee and Kim, which makes perfect sense for the orchestration of the piece, but his huge, brilliant sound overpowered the other soloists; it might have been a better balance choice to put him toward the back of the orchestra.

Kaye sacrificed a couple notes to the Trumpet God, but he hit all of the most treacherous high-register passages in this sparkling concerto and gave it a strong performance. In the quiet second movement, which moved along perhaps a little too smartly, Tarrant, Kim and Dee blended nicely, unfolding their melodic lines with an appealing lyricism.

All in all, an impressive and important concert: Impressive, because it was put together with very little rehearsal and managed to come off very well, and important because it is the kind of concert that has proven most successful today in winning over audiences. Today’s listeners like the combination of informality and serious chops that this kind of concert offers, and it will be a pleasure to welcome David Kim back in the future for another such rewarding evening.

The Symphonia Boca Raton, led by David Kim, repeats this concert at 3 today at the Roberts Theater on the campus of St. Andrew’s School in Boca Raton. Tickets start at $60. Call 1-866-687-4201 or visit www.thesymphonia.org.

Film: Playwright August Wilson began his chronicle of the African-American experience throughout the … END_OF_DOCUMENT_TOKEN_TO_BE_REPLACED

Film: Just in time with the opening of movie theaters in Palm Beach County comes the season’s most … END_OF_DOCUMENT_TOKEN_TO_BE_REPLACED

Music: The very last concert Franz Joseph Haydn attended in his life was in March 1808, about a year … END_OF_DOCUMENT_TOKEN_TO_BE_REPLACED